From snow to the rocky trails (to mosquito-infested muskeg in Alaska) one shoe has been on my feet more than any other this year. 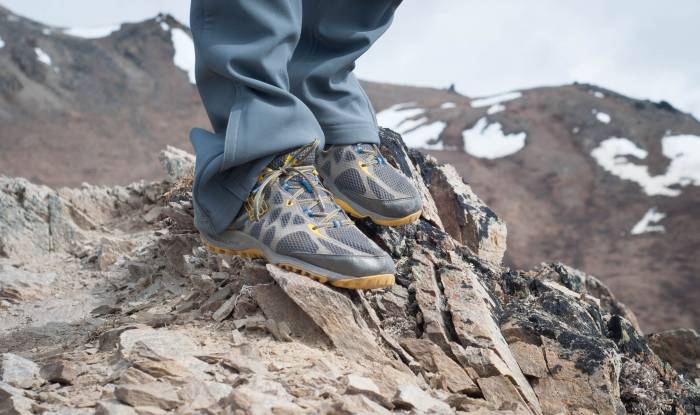 As a gear editor, I have access to a stupid quantity of shoes. Last month, when I looked through a dozen pairs before heading to Alaska, the Conspiracy Titanium OutDry Trail Shoe from Columbia was a top pick.

From day hikes to backpacking, I’ve come to depend on this shoe. The waterproof footwear has seen more than 200 miles of hiking, walking, and all-around use, and it’s held strong (and waterproof) while remaining comfortable, protective, and grippy on nearly all terrain.

A Waterproof Shoe For Light Hiking

As an ultra-runner, I’m hesitant when it comes to using waterproof-breathable fabrics in shoes. But through dozens of hikes, scrambles, walks along city streets, even 24-hour airplane trips with sweaty feet under a seat, I found the Conspiracy Titanium OutDry Trail Shoe to be solid.

I’ll head you off at the pass here — it’s not a running shoe, and it would be too hot and too un-breathable for summer temps. But for cool-weather hikes and sloppy trails, it’s proven itself over and again. 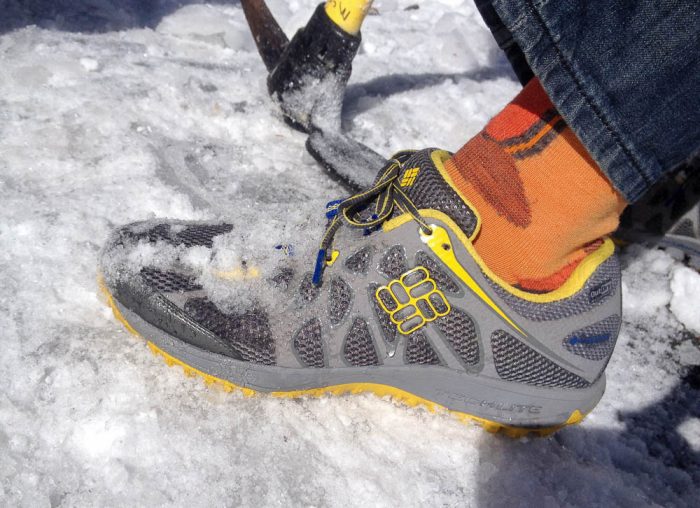 The secret sauce is in the OutDry material, a durable waterproof-breathable fabric proprietary to Columbia, as well as a grippy sole. Granted, this technology (and this type of shoe) is not new; Columbia announced its OutDry footwear a few years ago. But over the past couple months I’ve become a convert.

I first strapped on the Conspiracy Titanium OutDry Trail Shoe the day I hopped on an airplane to fly to Japan. The flight and related airport/travel time meant that I’d be in the shoes for more than 24 hours straight. 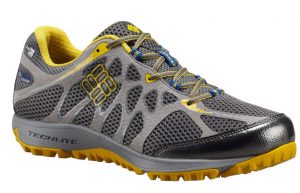 Having not taken them off on a 24-hour plane trip, my feet never got overly clammy or uncomfortable. This is remarkable, as a lot of waterproof shoes I’ve worn get wet from the inside due to sweat, especially after long hours sitting in a warm, confined place.

Once in Japan, where we skied for a week in the snowy playground of Hokkaido, I started paying attention to their performance. They kept my feet dry while walking through snow and puddles, and they worked fine as apres-ski footwear around the village.

The hefty outsole worked well on super-slick snow and ice in Niseko, Japan, in full-blown winter. I wore them for a week on all kinds of slippery streets, and they gave great traction and kept feet dry.

Conspiracy Titanium OutDry On The Trail

I’ve also used these on several trails in Colorado and, more recently, in Alaska, and again, I’ve been impressed. They grab rock and dirt well, providing a firm contact with the Earth. 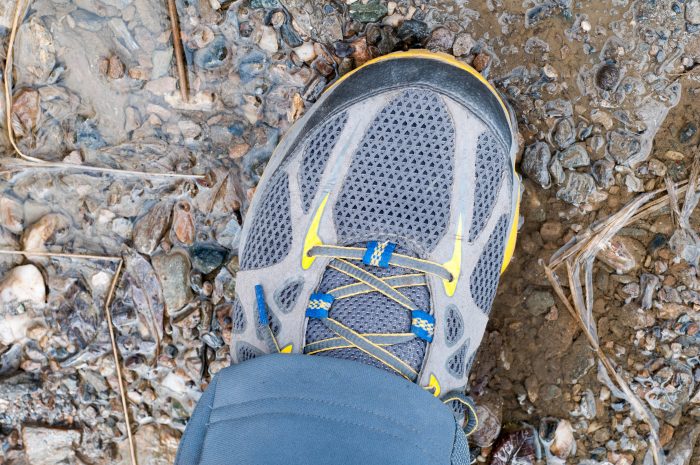 Walking about six miles on a steep trail at Denali National Park in May, these shoes scrambled across a mixed terrain of rock, dirt, snow, and ice and felt secure, all the while keeping my feet dry and comfortable in the 50-degree F weather.

Carrying a 25-pound pack a couple weeks later, they provided enough support. I’m a trail runner and can get by with less support than some folks. But knocking out 22 miles along the rolling Russian Lakes Trail on the Kenai Peninsula, a trail that was wet in several areas, these shoes left me with non-blistered, if tired, feet.

The Conspiracy has a flexible but protective midsole. It has a stack height of 16mm in the heel, 8 in the heel, for 8mm drop. This is pretty standard for a hiking shoe, and even many running shoes. Again, it’s not a running shoe, but the comparison comes easily with these.

While this shoe isn’t intended for trail running, it could work, and it weighs in at 11.4 oz., which is light for a waterproof hiking shoe.

It has a flexible sole. You will feel the trail some through the midsole, but not much. Rocks and other sharp edges are blunted, and stubbed toes don’t hurt much.

Ultimately, the Conspiracy Titanium OutDry Trail Shoe has impressed as a day-hiker that could almost certainly stretch into multi-day hikes with moderate backpacking loads.

The OutDry fabric functions well keeping water at bay. These shoes didn’t get wet from sweat, even after 24 hours on the airplane trips, and they have functioned well under a variety of hiking and outdoors uses.

For those seeking a do-all outdoors shoe, this option from Columbia is a safe bet. And at $135, the shoes stack up well price-wise against most any waterproof hikers on the market.

Up Next: All Out Crush: Merrell Shoe For Tough Mudder