Ecco launches a performance hiking boot made with what it claims is ‘the world’s strongest leather.’ 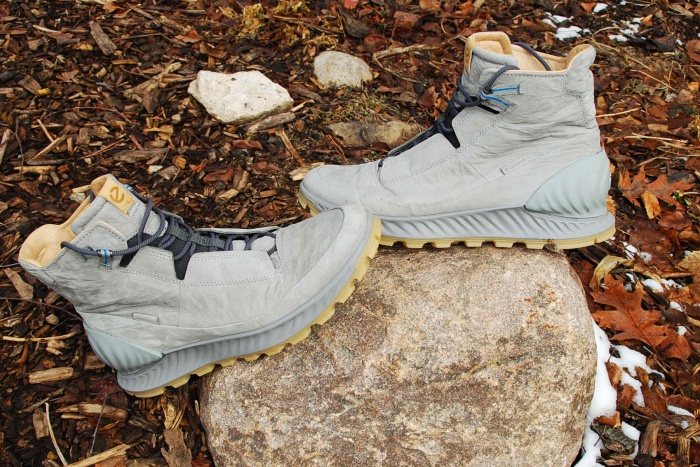 With the EXOSTRIKE, Ecco claims it made the world’s strongest leather upper. That’s thanks to the brand’s collaboration work designing Dyneema-bonded leather. As we’ve seen, Dyneema has taken the outdoor world by storm. It adds strength and reduces weight in everything from jackets and gloves to socks and packs.

And now the lightweight, stronger-than-steel wonder material hits hiking boots. We received a pair in advance of its launch for a first look at the build. We will update this story with a full review after we’ve put them through more miles on trail. Here’s an overview before we delve into detail: 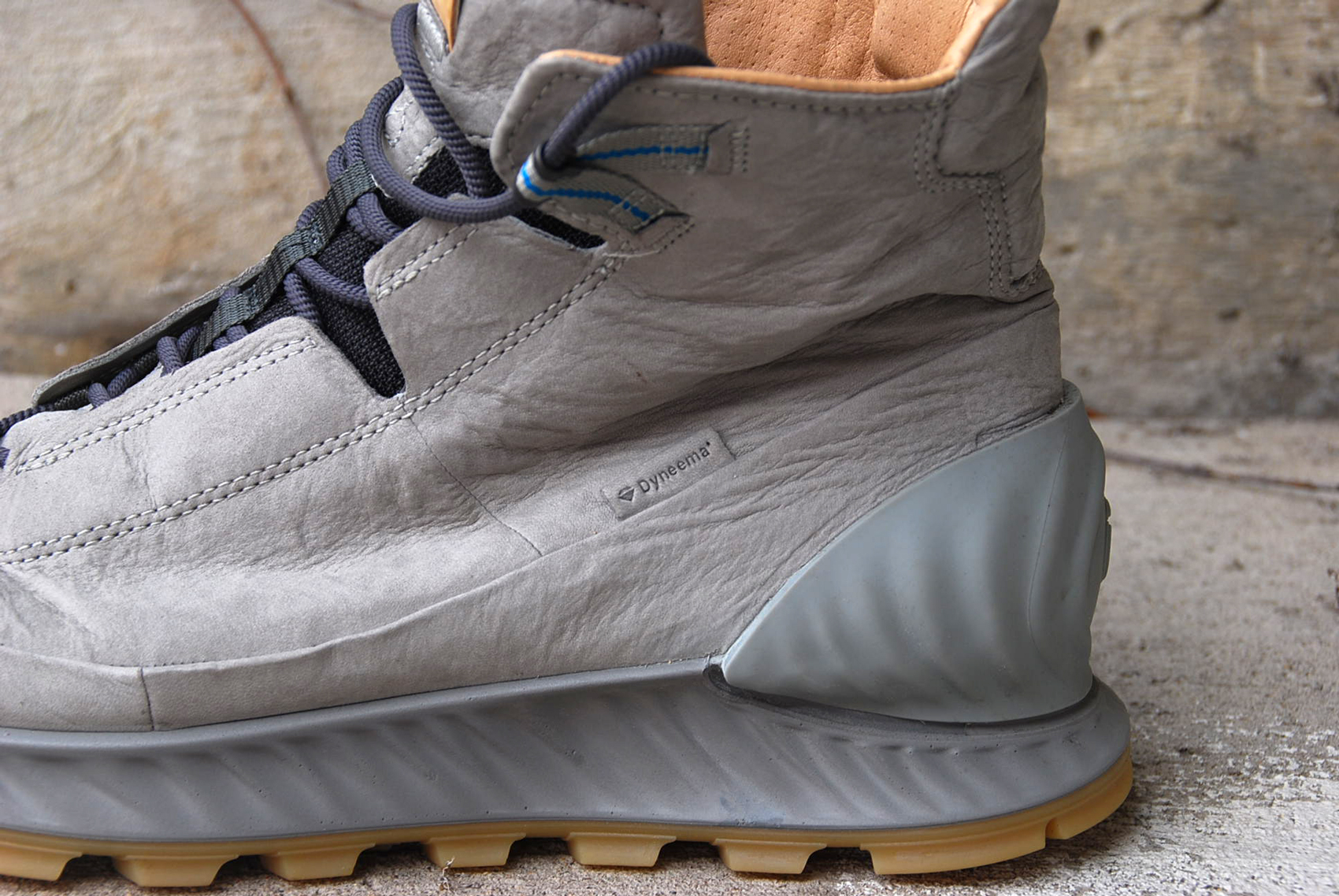 According to Ecco, the EXOSTRIKE’s Dyneema-bonded leather is five times stronger than any other leather. What does that mean? The brand claims EXOSTRIKE offers improved tear resistance. As anyone with leather boots knows, use and abuse can rip stress areas – near D-ring eyelets and on the toe box.

Time will tell if this holds true, but in the meantime I tried two basic tests. Using a utility knife, I scored the surface of the leather with a moderate amount of pressure. Though scratches were apparent, the knife did not cut through.

For the second test, I pressed a blade tip into the leather. Even with a fair amount of pressure, more than one would expect from sticks or brush, the blade did not penetrate. The result suggests that these will take scuffs and scratches like traditional leather and should provide plenty of protection against ripping or poking.

But the material’s strength is only half the story. It also received acclaim for being “paper thin” by judges who awarded the EXOSTRIKE a Scandinavian Outdoor Award.

I can attest the upper on these boots is thin. Compared to the leather Danner hikers I own, the EXOSTRIKE boots are markedly less stiff and thick. After wearing them for a few days, the upper is pliant and hugs my ankle without impeding range of motion.

That said, these are not super lightweight hikers. Ecco added a thick “Phorene” – its patented lighter-weight polyurethane (more about this later) – midsole, which measures 1.5 inches at the heel and drops to about a half-inch at the toe. 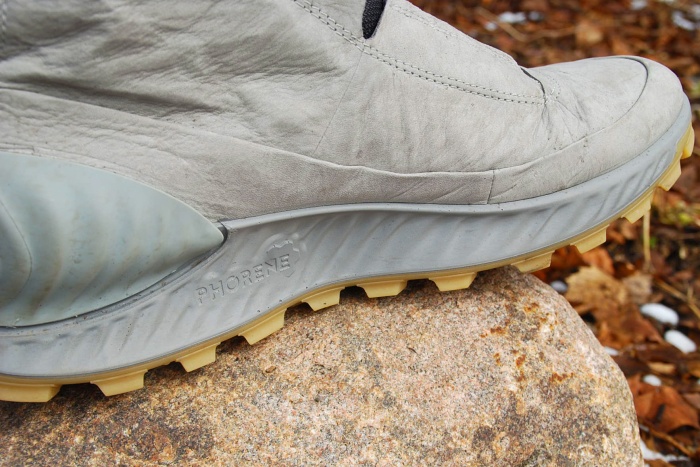 In addition, the EXOSTRIKE sports a hard polyurethane heel cup. With a texture like hard rubber, the “heel guard” provides snug support and extra impact protection. In sum, the pillowy midsole and rigid heel cup replace the ounces the Dyneema-bonded leather cuts. 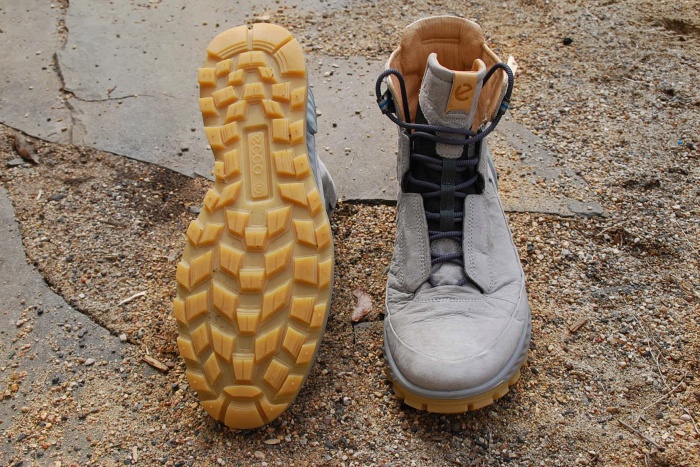 I’ve worn these boots for less than a week so far. I’ve traversed maybe 50 miles in that time, varying between urban errands and through sloppy spring parks.

We will add more miles and use for proper hiking, but my first impression is the EXOSTRIKE is a very comfortable boot that offers a unique fit and foot feel.

While the Dyneema has a good story, Ecco’s proprietary midsole and hard-sided heel cup provide the main benefits (so far). In fact, judges at ISPO – where the EXOSTRIKE won the Gold Award – acknowledged the “new P.U. Phorene midsoles” and “external heel stiffener” before the leather strength.

I get it. The EXOSTRIKE won’t help you jump higher, but the Phorene offers a trampoline-like bounce. Walking heel to toe, the midsole flexes under my heel and presses up against my arch. As I step forward, it provides a pleasant rebound into the heel. 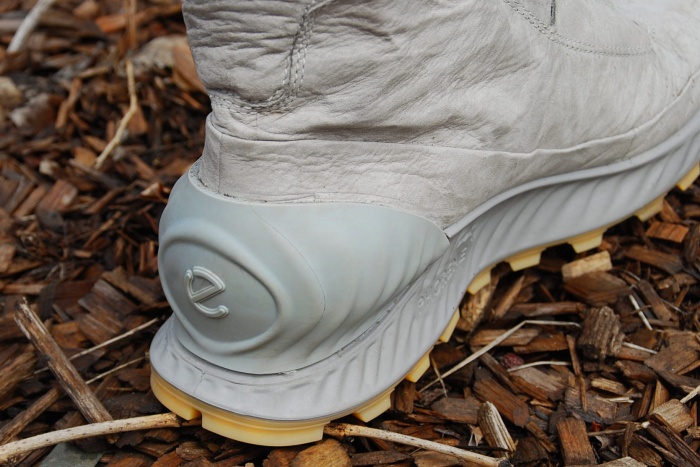 The heel cup, however, will probably make or break this boot for most people. While overall the boot is pliant and soft, the heel is totally rigid. Personally, I like the way it hugs my heel and lower Achilles.

But if you don’t like the sensation, there’s not much you can do about it. Those who like it will appreciate the feeling of support and added protection when heel-kicking muck off the soles. 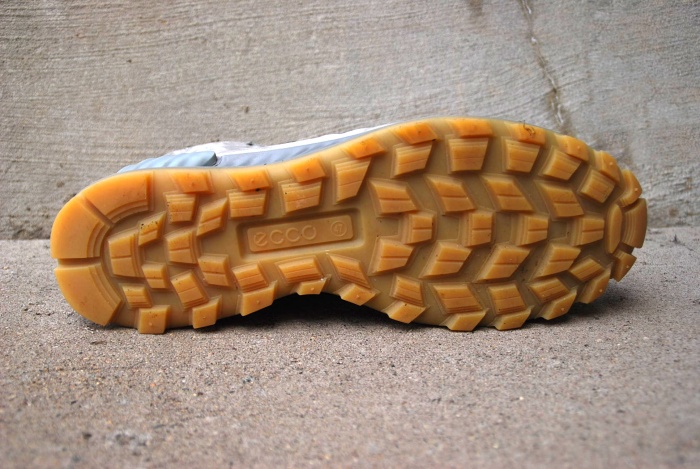 A note on the sole: I haven’t tested the EXOSTRIKE long enough to comment on the grip. The lugs look semi-aggressive, and the rubber comes from Ecco. We’ll update the sole’s performance after further testing.

Last but not least, the Dyneema leather: It feels great – like soft, smooth leather. Laced tight, the upper wraps around the ankle and top-foot. It’s a pleasant fit that I expect will breathe better than traditional leather.

But it’s not waterproof. The pair I have touts water resistance, and so far that’s proven true through plenty of 4- to 6-inch-deep puddles. But Ecco confirmed future builds will include a waterproof Gore-Tex model.

Be on the lookout for next month’s limited release of the Ecco EXOSTRIKE.

Up Next: Morsel Claims It Builds a Better Spork