The first thing you’ll notice about HOKA ONE ONE’s new lightweight hikers is the wide, extended heel base. A decade after raising eyebrows with its trail running shoes, the brand set its sights on making hiking more comfortable.

HOKA has a range of hiking shoes and boots, but these are different, thanks to recent changes in materials and assembly technologies. The brand’s designers feel they’ve designed a lightweight boot that prioritizes stability and cushion without sacrificing performance. 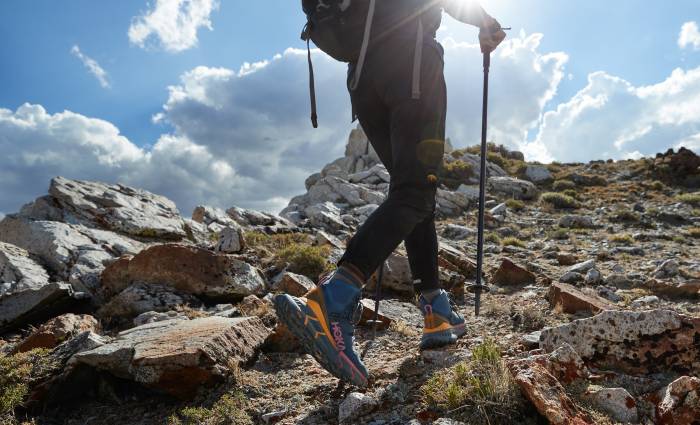 We talked to the HOKA product team to better understand the intent behind this eye-catching new take on hiking boots. In short, their goal was to make hiking a better experience.

Specifically, one of the major pain points for hikers is downhills. Downhills often come after long climbs, and thus the descent happens on tired legs. This adds stress on the knees and ankles while walking downhill — a well-documented aspect of hiking.

That’s why HOKA built the TenNine’s heel to catch and cushion the landing of each step while providing a wider base for more stability in the ankle and up the leg.

Likewise, to make uphills easier and more comfortable, designers point to the stability and energy transfer of the rockered sole — designed for softer landings that propel the foot forward.

HOKA TenNine Hiker: Get to Know the Hubble Heel

Why is it so big? Its width is for greater stability. The swallowtail extension behind the shoe works to cushion and propel the footstrike forward.

Look carefully; there’s a notch in the swallowtail that creates different sides to the heel. This design aims to give the sole more flex and independent movement as it walks over uneven terrain. From there, HOKA’s customary rockered sole works to propel hikers forward (heel to toe) without engaging the muscles used for lateral stability as much.

The idea, designers say, is to create cushioning for both comfort and longevity. That’s how HOKA intends to make hiking more enjoyable.

But take note, the bigger profile doesn’t translate to a heavyweight boot. The men’s boot weighs in under 18 ounces. For years, HOKA designers sought to create a larger boot with less weight without sacrificing performance. Only through recent innovations in materials have they found that possible.

For example, new EVA foams provide more cushion from less material. Similarly, shoe uppers have used minimal TPU overlays to provide structure and stability, cutting down on the thickness of the upper. Through years of developing running footwear designs, HOKA has reduced materials and found ways to make its footwear lighter, yet responsive.

Rubber is a sturdy, cushioning material, but it’s usually the heaviest material for a shoe. To move beyond a tradeoff in cushion and weight, HOKA used Vibram’s Litebase construction, which Vibram claims “reduces 30% of the overall sole weight” while cutting its thickness in half.

The Vibram Litebase construction is unique in that it incorporates a few grooves not seen in other brands’ use of the outsole. Those grooves help match up with flex or hinge points in the rest of the shoe — another difference achieved through collaboration with the material maker.

Still, the sole is just one aspect of stability. The TenNine’s bootie and upper are designed to cradle the heel and midfoot for a locked-in feel. Even the metal hardware used for the top three lace latches is made to slide through or pop out for on-the-fly adjustments and to fine-tune the fit of the mesh upper.

On the impact side, the TenNine boots (and other HOKA footwear) reflect the brand’s commitment to reduce and reuse. For instance, the GORE-TEX Leaf bootie is made of recycled polyester and is Bluesign approved, which means that it also uses less water and chemicals than virgin material.

A more streamlined product and its production are part of the brand’s design process. TenNine’s simpler construction and less material result in a bigger shoe with a smaller environmental footprint than would have been possible just a few years ago. 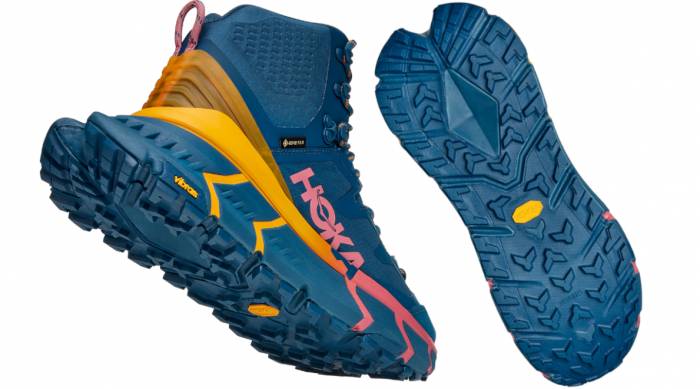 HOKA is no stranger to upsetting the apple cart of footwear design. In just a few years, HOKA went from being called “clown shoes” to dominating trail race start lines. Time will tell what impact the TenNine boots will have on hiking, but its designers feel the lessons learned in making this boot will inform the product line for years to come.

Additional colorways will be available in February.

Take a closer look at the HOKA TenNine Hike GTX

This article is brought to you by HOKA ONE ONE.