Have your cushion and run fast too? The Hoka One One Clayton proves to be protective, supportive, and still screaming fast. 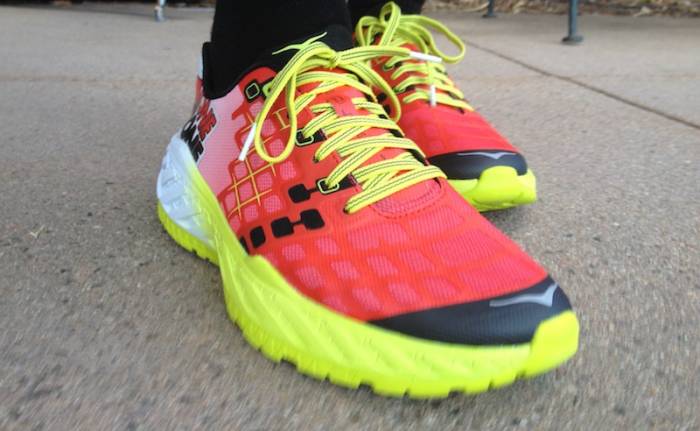 It also comes in a women’s version, with a claimed weight of 6.3 ounces for a size 9.

While that’s far from the lightest running shoe around, it stands out thanks to a healthy 24mm – 20mm heel-to-toe stack height. That’s a lot of material underfoot, material that received serious thought from Hoka One One designers.

I took the Clayton for a spin with some of the brand’s ambassadors, including trail speedster Sage Canaday, at a launch party hosted by Boulder Running Company. I’ll get into detail below, but to sum up the Clayton in a few words: responsive, fast, and protective.

Hoka One One is a polarizing brand. I’ve been on the fence about the tall-footed designs for a while, having chased many fleet-footed runners wearing these glaringly different shoes for hundreds of miles during ultra-marathons. But I’ve been hesitant to give them a serious try, daunted by the crazy amount of foam found in many trail models.

But at the brand’s invite, I hopped into a pair of Hoka’s latest road shoes, the Clayton, skepticism still fully intact. I didn’t remain a skeptic for long. 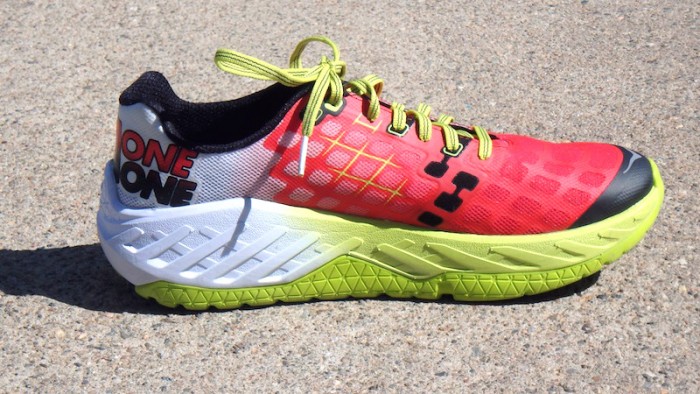 Within minutes of leaving the Boulder Running Company and turning onto a concrete rec path, I was giddy about these shoes that felt super light on my foot, yet padded the hard trail in a way that still seemed to let my foot find its natural gait.

Gliding along next to Canaday — a crazy fast ultra-runner sponsored by Hoka One One — I asked him about the Clayton on live-streaming video over a Sioeye Iris4G video camera.

“I’ve worn them for some 400s on the track,” Canaday said. “They’re super fast. It’s the combination of firmness, responsiveness, and cushion. It propels you forward.”

I tend to agree with his sentiments.

It’s worth noting that this is the shoe worn by Michael Wardian (a prototype at least) when he set the 50K treadmill world record of 2:59:49 in May 2015.

Most running shoes have a rubberized outsole that faces the Earth. Hoka One One removed the standard rubber from the Clayton, using instead its proprietary RMAT material, which is a type of EVA foam blended with rubber. It results in a springy, very light sole that is remarkably quiet on pavement.

On top of that, the Clayton lays a bi-density midsole, which is firmer in the forefoot, softer in the heel. The firmness of the forefoot is one of the qualities that make this shoe feel fast and springy.

Hoka One One Clayton Road Test

Cruising comfortably at a 7:30 mile, the Clayton felt really efficient. It has a bit of a sole rocker, or rounded shape, that helps quickly move a runner from heel or mid-foot strikes onto the forefoot.

I appreciate the brand’s willingness to accommodate the heel strikes that most folks encounter after tiring during long distances. During testing runs under five miles, I’ve been able to maintain a mid-foot strike, and the shoe shines with good form.

The brand claims it tries to minimize the penalty for bad form.

One thing I didn’t like: The arch support seems a little high in my left foot. It’s subtle, and once running a few miles, it didn’t bother me. However, I don’t like having much support in the arch, and I noticed more pressure here than I’m used to.

The Hoka One One Clayton is a really nice shoe. After just a couple runs, I’m convinced it will find frequent usage among my quiver of road running shoes, and will likely be selected when I’m working on fast, long runs. 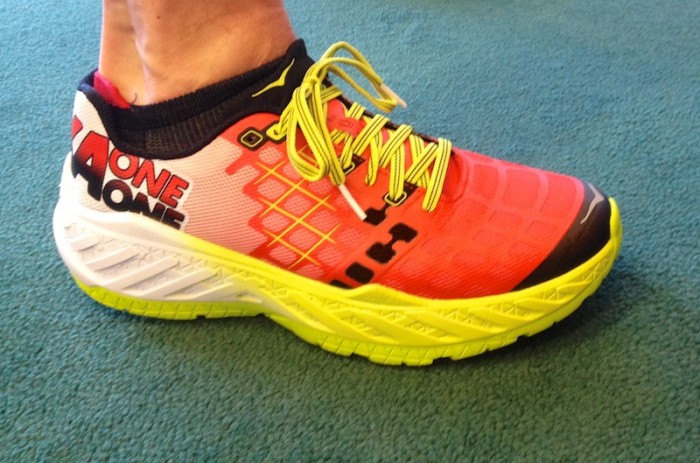 Because of its protection and support, I will likely supplement this shoe with other lighter, less protective shoes for short speed work, as I like to give my foot a good workout and really dial my form with more minimal shoes.

But for big mile days, and even tempo and recovery runs, the Clayton knocks it out of the park. This is a sweet, fast shoe that should not disappoint those looking for some protection without sacrificing speed.

The Clayton hits the U.S. market on April 1. For more information, visit Hokaoneone.com.

Up Next: Dream Job? Start Your Own Gear Brand