Pending zoning approval, the bike brand will move to the foot of North Table Mountain. And it invites other companies to join it. 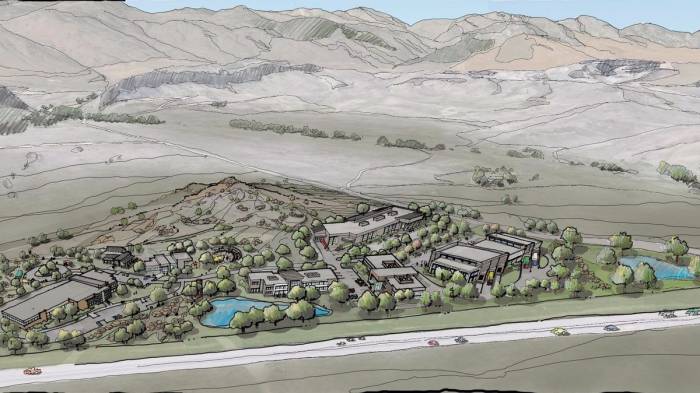 Last week, mountain bike manufacturer Yeti Cycles in Golden, Colo., and commercial design/build and development firm Neenan Company in Fort Collins, Colo., announced a new plan for an outdoor campus. The proposed campus would serve as Yeti Cycles’ new headquarters and factory. It would also house a handful of other outdoor brands and related businesses, with a brewery and other facilities open to the public.

The 40-acre parcel is five minutes north of downtown Golden in unincorporated Jefferson County west of Highway 93. It’s currently zoned for agricultural use. Yeti and Neenan have applied for rezoning.

The proposed development, which requires rezoning approval, includes 25 acres of developable land. Yeti Cycles will retain 9 acres. Neenan Company will develop the remaining 16, selling or leasing the remaining buildings to other owner-partners.

With the campus, the partners aim to provide businesses the opportunity to own and operate commercial property in a synergistic environment focused on enhancing the outdoor industry and culture.

“We had this idea for a while,” said Chris Conroy, president of Yeti. “But it’s hard to find land on the Front Range, especially next to trailheads. We literally saw them pounding in the ‘for sale’ sign for this parcel, called immediately, and by the next day had the land under contract.”

Yeti partnered with Neenan — best known for its work on Fort Collins’ New Belgium Brewery — to build its new headquarters.

“We realized we have to put in sewer, water, and electricity,” said Conroy. “We’re mountain bikers. We have a business to run. And we’re not developers, nor do we want to be.”

So Yeti and Neenan partnered on the bigger campus project, as well as on the construction of Yeti’s space. On its 9 acres, Yeti will build a 50,000-square-foot building, with room for another 30,000-square-foot structure and a third 25,000-square-foot one. Conroy anticipates these fulfilling Yeti’s growth needs for the next 20 years.

Before this announcement was made last week, according to Conroy, there was “a lot of interest” from other companies in relocating to the campus. In the 24 hours following the announcement, at least six more companies made inquiries. Neither Yeti nor Neenan will discuss other possible partners until rezoning is approved.

Conroy did confirm that there won’t be competing bike brands. Both a brewery and a physical therapy practice are already committed. The campus will likely have a building dedicated or partly dedicated as shared office space for startups. Connecting the campus directly to local mountain bike trails is a given. Design for an on-campus pump track is already in the works.

As for Yeti’s building, there’s aren’t blueprints yet, just a list of elements Yeti wants. These include a larger showroom and store as well as meeting space that can accommodate local bike club events. Yeti wants the new building to highlight its factory and staff.

“Our factory demo program is more popular than we ever envisioned,” said Conroy. “In the new space, we’ll expand the demo program with more bikes, bike availability, and staff as we grow and the program grows. And for Yeti Freaks who drop in, we have four beers on tap now. We’ll likely have more.”

Of course, any current or aspiring members of the Tribe are welcome anytime. Critical for Conroy is that the campus has an inclusive feel and that Yeti is set up to welcome its fans, friends, and followers.

“We’re excited by the prospect of creating an outdoor industry ecosystem through this campus development,” said Conroy. “This project fills all our needs — it accommodates our growing company, offers great access to local mountain bike trails, and allows us to fulfill our vision of surrounding ourselves with companies that value outdoor recreation. There’s a cool vibe coming together.”

The zoning commission told Yeti and Needham that the approval process will take five to eight months. And both companies have their fingers crossed that the rezoning will pass.

“It’s important for us to stay in the Golden area,” said Conroy. “We’ve been here 20 years, and the proximity to trails is critical for us.”

“This proposed project is a prime example of the innovation and leadership emerging out of the local industry,” said Kristi Pollard, president and CEO of Jefferson County Economic Development Corporation.

“An outdoor lifestyle campus of this scale highlights the impact that the outdoor industry has in Colorado, with the market poised for continued growth. We’re proud to see this drive for collaboration and support among outdoor brands for the betterment of the Jefferson County business community.”

Up Next: Women’s MTB Camp Shares Tips for Female Riders