You might not think you need this electric chainsaw, but you’re wrong. Stash the Greenworks GS 110 in your pack, and you’ll clear trail with lightning speed.

I live on an awesome multiuse trail network in the Vermont woods and volunteer with my local trails club. And when there’s a tree down, I often get the ask to clear it.

Sometimes I stick a Silky Saw in my pack, ride to the blowdown, and get after it. But I routinely wish I had a chainsaw to handle the cleanup. And I do have several. One is an 18-inch bar Stihl gas saw that can cut through anything I encounter. And I have an older battery-powered saw that isn’t worth carrying beyond the edges of my yard because it dies so fast. 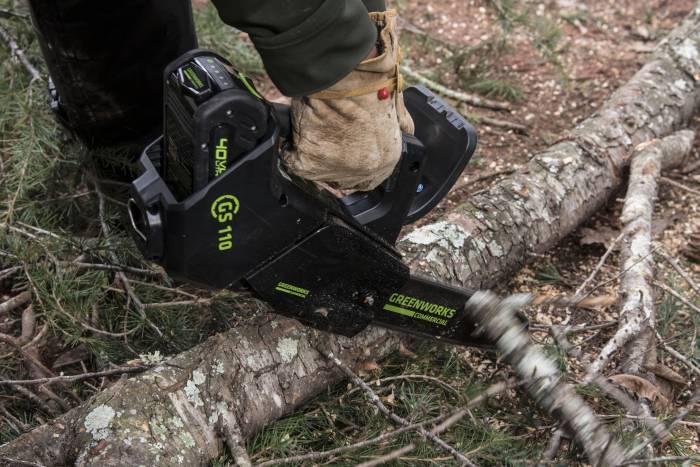 The saw, which Greenworks says weighs 9.92 pounds — it was 8 pounds 2 ounces on our scales with the chain oil half full and the battery and bar cover installed — is powered by a 40W battery and a brushless motor. Steel bucking spikes dig in for cutting bigger logs.

A D-ring let us hang it — most useful if you’re climbing a tree with this saw. And there’s no need to descend a tree to restart the saw. The push-button start means you can stop and restart without any awkward or unsafe-when-you’re-swinging-a blade-around movements.

To start the saw, you press two buttons on the handle, and the chain starts right up. Release the buttons, and the saw turns off. It’s battery-powered, so no gas required. But you do need chain oil, which you put in the chain oil reservoir on the side of the saw. A clear window on the reservoir lets you check oil levels without opening the reservoir.

The chain tightens the same way it does on any standard chainsaw — with a screwdriver and wrench.

The test:  With the battery fully charged, I headed into the woods and started cutting. I live in a northern hardwood forest, so I decided to cut hardwood only — maple and ash for this test. I felled several smaller trees, up to about 4 inches in diameter, then I limbed them and bucked them up.

For every three limbs I cut, I counted that as one cut. The rest of the cuts were maple and ash logs. I made 95 cuts, then stepped on a bees’ nest and took a 5-minute break to relocate and let the stings settle down. After five more cuts, the saw seemed like it was done, so I started back to the house, a 5-minute walk. I saw a small tree I’d been meaning to clear, and I made seven more cuts before the saw called it quits.

Total: 107 cuts on one battery charge.

Previously, I cut up a dead apple tree in my yard (around 50 cuts), then took the saw to my local mountain bike club trail day, where it made at least another 50 cuts, maybe more. Normal trail work doesn’t necessarily involve sawing up maple logs, but a combination of limbing and clearing downed trees. 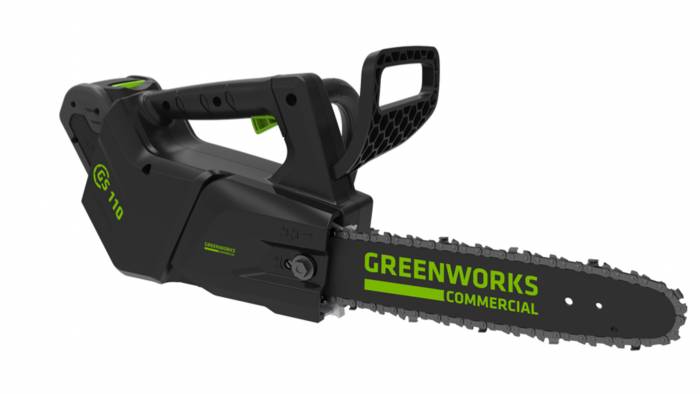 The saw packs a punch and is long-lasting. With the battery recharged, I felled an 8-inch-diameter maple, including a 9-inch wedge cut, and that overpowered the saw. But felling medium and large trees isn’t what an arborist saw is for. There’s far less vibration with the Greenworks saw that with any chainsaw I’ve used.

And it’s quiet enough you can use it without headphones with no danger of damaging your ears. Greenworks says the saw makes half the noise of a gas-powered saw, with five times less vibration.

A Real Saw for Serious Work

Because it’s light, quiet, and vibration-free, it’s hard to take seriously as a saw. I found myself heading out to cut up “just a couple things” in flipflops and shorts, not leather boots and protective chaps, which is what I usually wear.

But this saw is no joke. Battery-powered saws have more torque than gas saws, and they can even cut through chainsaw chaps that resist gas saws. When I realized what I was doing, I set the saw down and changed.

Yes, you should still wear protective chaps, eyewear, a helmet if you’re sawing overheard, protective boots — in other words, all the safety gear. The saw has a chain brake like most gas saws. But let go of the handle buttons, and it just turns off. 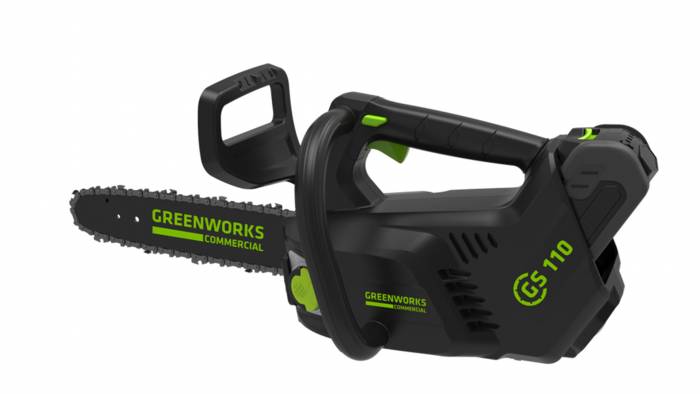 The 40V lithium-ion battery has a super-accurate battery level indicator on the back, and it charges fast. While most Greenworks batteries work in multiple tools, for now, this saw’s battery is tool-specific. Larger saws use Greenwork’s 82V battery, which can also be used in Greenworks leafblowers and mowers.

Over the life of the saw, you’ll save money by not having to fill this chainsaw with gas. And while Greenworks hasn’t calculated the exact carbon footprint of chainsaw plus battery and charging (which I do with solar, versus gas-powered chainsaw), hippie liberal back-to-the-landers like me will feel good about not pumping CO2 into the environment when we want to use power tools. Also, while some may equate gas fumes with the smell of freedom, it’s not particularly healthy to inhale them.