The deadlift is a fundamental exercise, but doing it wrong is a recipe for injury. We examined the deadlift and six other exercises that could cause injury. Here’s what to try instead while you’re working out at home.

Remember the days when you’d walk into a workout class and the instructor would explain the hourlong game plan, crank up the music, and you’d sweat your way through three or four rounds of a circuit? Feels like ages ago, right?

The problem: There’s likely not a trained expert in your house to keep an eye on your form. And the last thing you want to happen amid this global crisis is to injure yourself and not be able to hit the trail when restrictions are lifted.

I should know. I should know. A sprained SI (sacroiliac) joint and a bulging disc sidelined me 3 years ago, taking me out of the game for months. As I learned during the recovery process, I had likely been performing a lot of common exercises just slightly wrong, slowly weakening my joint until it finally gave out.

Over time, any exercise performed incorrectly can strain the body and cause long-term damage. Among the most divisive of these injury-inducing moves is the deadlift.

Quarantine Fitness: 'Prison-Style' Exercises You Can Do Anywhere

No weights? No worries. If you feel like a prisoner in your own home, you may as well get ripped in the meantime. Read more…

“Deadlifts are a hot-button issue for many people,” said Alex Lanton, part-owner of Denver-based Atlas Physical Therapy. As a doctor of physical therapy and certified orthopedic clinical specialist, he’s been treating athletes for more than a decade. (Full disclosure: He’s also my physical therapist.)

“When done right, it helps protect your body and [leads to] better performance. When done wrong, it can exacerbate other issues you’re having and lead to other things,” he continued.

“For most of us, working out is a way to keep in shape to do the other things we want to do. We don’t want to lose [that] time because of the stuff we’re doing in the gym.”

Now that we’ve all moved our workouts into our homes or nearby parks, we asked Lanton and Tim Holan, assistant general manager at the CU Anschutz Health and Wellness Center, to share exercises that can be particularly dangerous to our bodies when done without expert guidance.

“There are always situations where these are amazing exercises, but for the general population, the return isn’t worth the possible complication or risk,” Lanton said.

You’ll want to consider removing these seven moves from your routine. But don’t worry: We provided alternative exercises so you can get strong with less risk of pain or injury.

(Pro tip: Make sure to move your body through a dynamic warmup before working out. Lack of mobility plays a role in injuries. And, as Holan notes, even squats can cause pain if your hips or ankles don’t have enough range of motion.)

Risky Exercises and Their Alternatives

The problem: Most of us have crappy form. Both Lanton and Hanlon advise only performing deadlifts on your own if you’ve previously worked with a trainer or coach on your form and practiced performing it properly.

“It’s a really complex movement,” Lanton said. The most common mistake he sees is letting your low back fall out of a straight position, particularly when picking up or putting down the weight. That puts added pressure on your lumbar spine.

In the short term, a single bad deadlift can cause a disc herniation; over the long-term, poor form can lead to lumbar degenerative disc disease.

The alternative: Either do ’em right or work those butt muscles with glute bridges. You can work your way up to single-leg versions or add weight to your hips for added difficulty.

Or, if you want to build up to deadlifts, start by improving your hip mobility with hip hinges: Stand tall and then “sit your hips back like you’re shutting an open car door,” Holan said.

You should feel a stretch in your hamstrings and glutes. Hold a broomstick or PVC pipe at your back to make sure you have points of contact with your head, mid-back, and tailbone.

The problem: Simple: “Most people do them wrong,” Holan said. They don’t engage their cores at the bottom of the burpee, causing excessive arching or hyperextension in the lower back. If your shoulder stability isn’t stellar, violently dropping to the ground can irritate a pretty important joint, and decent hip mobility is required to jump back up into a squat position.

Plus, many people use burpees as a workout finisher, making it more likely that their form will be off because their bodies are zonked. Ben Bruno, a well-respected trainer in Los Angeles, refers to burpees as an “advanced exercise masquerading as a beginner exercise.”

The alternative: Split the burpee into its elements — squat jump, squat, pushup — and perform them each separately. It’ll be a more effective workout, Holan said, and save your shoulders, hips, and back.

The problem: The quick, repetitive motion often requires you to round your spine (something you’ve already been doing sitting at your desk all day). This puts extra pressure on your lumbar and cervical structures, increasing the chance of injury, all without adding a lot to your physique or performance.

“It doesn’t give you a six-pack muscle. It doesn’t make you better at your sports because those are not the muscles we use to do them, and it causes strain to the back and neck,” Lanton said.

Holan adds that compound movements like squats or pushups will result in the loss of more belly fat than ineffective crunches, which he never includes in his regimens for clients. Need more reason to cut them from your routine? 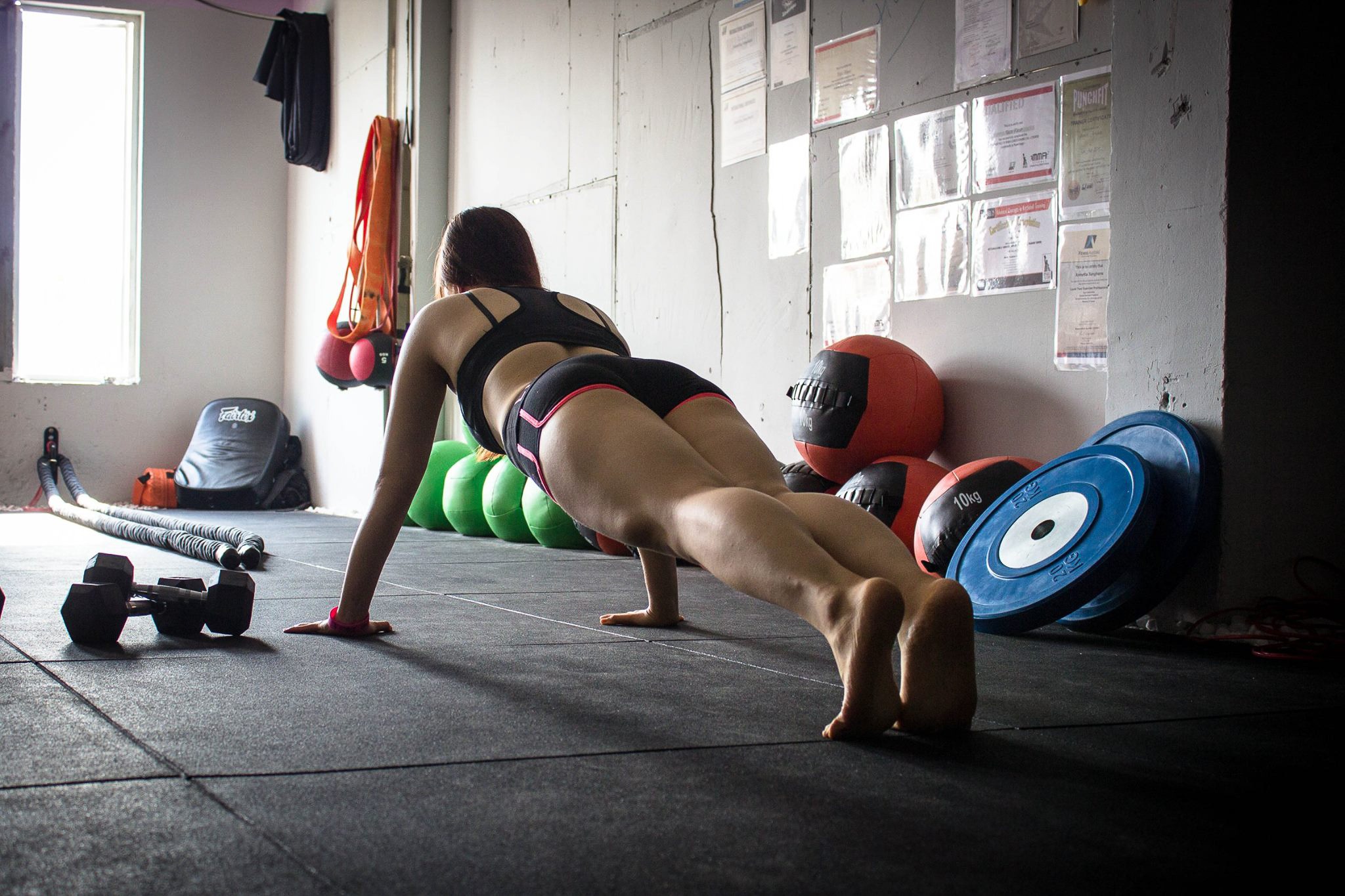 The U.S. military began phasing out situps from its fitness programs back in 2015 because of injuries (in 2005, 56% of self-reported injuries after the Army Physical Fitness Test were attributed to the situp portion).

The alternative: Plank variations are much more effective because they work your deep and lower abs — specifically, the transverse abdominal muscle — and force you to resist movement rather than create movement at your lower back.

The problem: Especially when performed fast and heavy, you’re pinching all of the soft tissue as you raise your arms overhead. “Over time, you’re going to wear away the shoulder tissue,” Lanton said.

The alternative: Try a bent-over row, pulling the weight(s) toward the upper chest. Or grab plates or dumbbells, lie on the ground or an exercise ball, and raise your arms at 60 degrees (think of making a “Y” with your body).

When you go back to spin class and reach the arms section, use lower weights and bring your elbows to 30 degrees from the center of your body. This will help unload the pressure from the shoulder tissue.

The problem: “It’s a similar problem as the shoulder press, but even more so,” Lanton said. “You’re getting your elbows higher than your body, leveraging your large arm bone straight into the joint, and pinching all the tissue. And you tend to be leaning forward at the upper body and neck. It wears everything down.”

A 2014 study published in the Journal of Strength and Conditioning Research found a “significant strong association” between upright rows (performed at an angle greater than 90 degrees) and shoulder impingement (specifically, subacromial impingement syndrome).

The alternative: Opt for a bent-over reverse fly using plates or dumbbells.

Standing, Weighted Side, or Oblique Crunches

The problem: Holan calls this is a “recipe for a low-back disaster,” and an ineffective one at that because spot fat reduction or fat mobilization doesn’t actually work.

The alternative: Instead, he advises a suitcase carry, where you stand or walk while holding a weight (your “suitcase”) in one hand. Just make sure to keep your shoulders square and do your best not to lean toward the side with the weight. “It works your obliques really well,” Holan said.

The problem: “Peak ACL strain was generally greater when performing seated knee extension as compared to most weight-bearing exercises,” noted a 2012 study.

The setup puts a lot of pressure on your ACL and meniscus and pushes the kneecap into the joint, wearing out the cartilage and unnecessarily stressing your ligaments, Lanton said. These extensions can also exacerbate runner’s knee or IT band syndrome.

The alternative: Weighted, single-leg squats with one foot on the ground make for a good swap.

Up Next: Best Outdoor and Home Gear Deals of the Week