And believe us, this thing is a workout, both mentally and physically. The guy on the bike before us had to sit down to rest. And even though the more physically fit can pedal harder and longer, the whole body-mind workout is consuming. It immerses you in a VR gaming world. This requires hand-eye coordination and upper body movement to control the “gaming yoke” handlebars. And you have to pedal the bike for propulsion in the game. 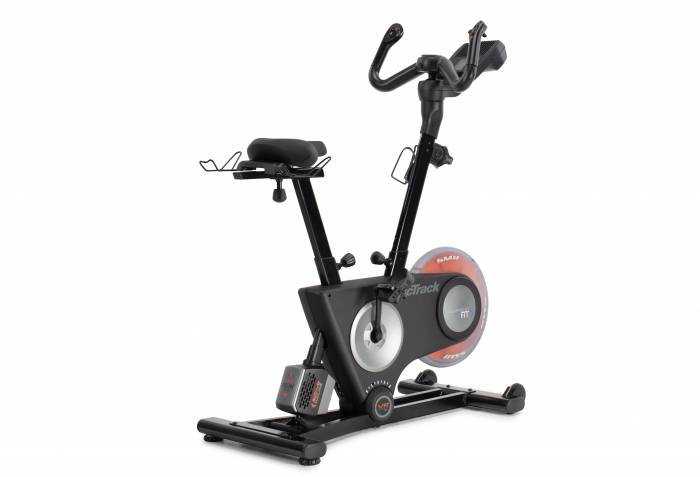 NordicTrack’s unique spin bike automatically adjusts incline and decline to release tension. It also automatically turns on a fan when you are going downhill. All the movements feel incredibly real, ebbing and flowing between relaxation and adrenaline as you pedal the steampunk flying machine and go for points in the game.

Check out the video below for a sense of what the VR game world looks like.

And while fitness games such as the Wii have been around for a while, this is the first VR product that ties game mechanics to the game itself in an integrated way. VIVE built and optimized this first VR platform for large-scale VR and ultrarealistic interactions. 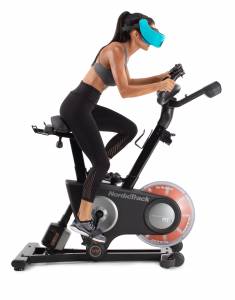 The brand curated 15 partners for a special launch at CES. NordicTrack is its first fitness partner.

VIVE aims to create a kind of Netflix for the VR gaming world through the VIVEport subscription service and app store. It already operates in more than 60 countries. This “VIVE ecosystem” is built around the top VR hardware on the market and supported by VIVE X, a $100 million accelerator for VR and technology-related startups.

According to Darren Ashby, VP of advanced development at ICON Health & Fitness, parent company of NordicTrack, “This new product is designed to capture your imagination in a unique way so that you have to learn how to manage the physical and mental demands that tie you to the game itself. And that’s what makes it really fun. It’s got the addictive cycles of relaxation and intensity.”

Ashby compares the fight-or-flight endorphin rushes to those experienced by CrossFitters. He calls it a “synergy of experiences.”

ICON has been a pioneer in internet-connected fitness equipment since 1998 with the birth of iFit. “This is the natural evolution beyond just the fitness enthusiast,” Ashby said, “and delivers it to everyone who wants to play and hack their body into shape.”

Together, the brands are calling the phenomenon “total-body gaming.” It immerses users into a virtual gaming reality where fitness and fantasy collide. Physical efforts control the difficulty and progress within virtual worlds, and exertion on the bike seamlessly controls your gameplay avatar. 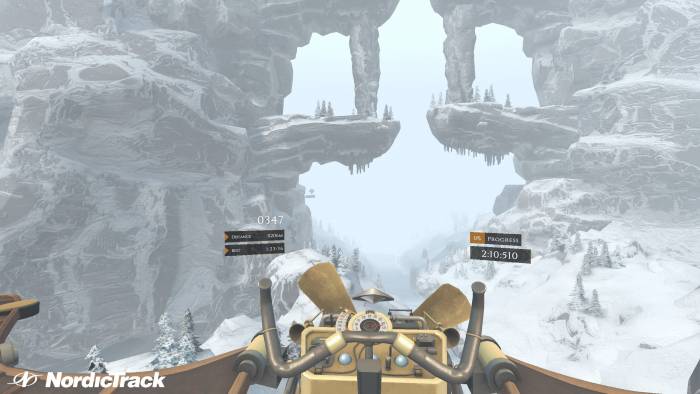 As riders descend and scale various landscapes, the bike automatically adjusts to provide a realistic gaming experience. Alternative terrains within gameplay engage the bike’s 24 levels of digital resistance. At the same time, an integrated fan increases and decreases speed as the player’s speed changes. It’s an immersive sensory experience.

The patent-pending GameFit console includes the 8-Axis Gaming Yoke with integrated left and right-hand controls. Position-sensing pedals track 16 different pedal positions and sync with gameplay. Simply pedal forward, backward, or stomp up and down to act within the game.

The package currently includes three specially developed games: Aeronauts, Bike Messenger, and The Last Rider. The brands are calling it “the next generation of motivational, goal-oriented gaming.”

Up Next: Insider’s Bike: NordicTrack’s Top 5 Features for the Studio Cycle