Home » Hunting » To Kill a Black Bear: A Hunt for Answers

In the years I’ve spent living in bear country, I’ve learned to walk with the knowledge that I’m in their house. For the most part, I’m welcome. I become a benign bipedal creature just passing through, occasionally kneeling to place my hand in paw prints in the mud and run my fingers over scratch marks on trees.

Bears inhabit a significant place in my consciousness — it feels like a kinship.

Connection to the Creature

My connection to bears was forged during my initial years as a hunter. This new endeavor stemmed from the desire to eat more ethically, take responsibility for the death on my plate, and tie myself to the Montana landscape in a way that etched itself into memory. 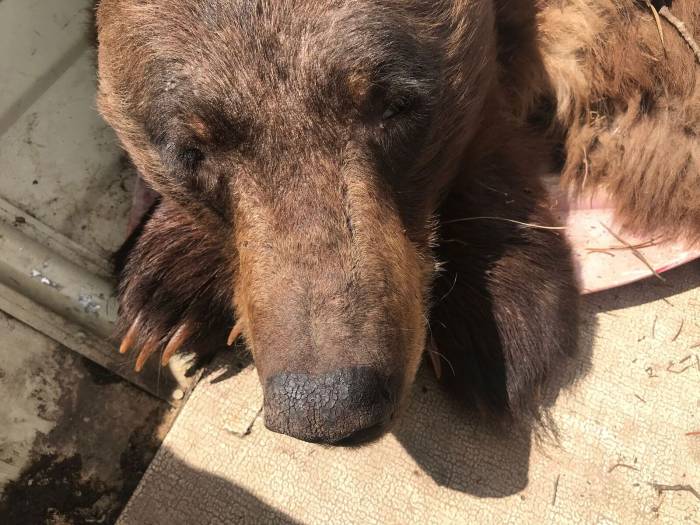 Once I punched my first few tags, I learned that my role extended to an implicit partnership with the goals of wildlife management. I was not only contributing to a new sense of ownership within myself, but to a greater method of conservation. This is unique to the American way of life and has been since the onslaught of (and then recovery from) the early 20th century.

Bears and other predators fit into the North American Model of Wildlife Conservation, but I initially approached the subject with reticence. Do people eat bears? What does the ego have to gain from killing a bear? How does this fit into my own personal ethics?

I worked on the television show “MeatEater” while I was first sussing these questions out as a new hunter. A plate of spaghetti and black bear meatballs answered my first question. Bear meat is edible and, in fact, delicious when processed correctly. I’ve had bear multiple times since, and it’s never been a bad experience. That was a simple answer.

2. What does the ego have to gain from killing a bear?

The ego is another story, and I’m sure Freud would break it down better than I can. It’s an obvious question that the world of hunting at large has trouble tackling. A big bull elk on the ground, subzero temperature mountain lion hunts, high mountain expeditions — they’re all fuel for ego.

To provide a separate answer for just bears in particular would miss the point. I’ve abandoned that question with the knowledge that a person’s heart is the only thing that holds that answer. I’ll work that one out on a case-by-case basis.

3. How does this fit into my own personal ethics?

The third question gets to another core of the matter: my own heart. This spring, I encountered a few guys wearing camo, and I stopped to take a look at the animal in the bed of their truck. A tuft of cinnamon-colored hair tipped with blonde was visible beneath a tarp, and I asked if I could take a look.

The guys obliged, and I took a moment with the cinnamon-phase black bear. I held his huge paws, rough and muddy from digging for food. His nose was dry, coal-black, and still. His round, blonde-tipped ears were perfectly perched on his square head.

Excitedly, the hunters discussed how they’d be processing and rug mounting this guy. One said this was his first archery bear, an accomplishment he’d been working toward for a long time.

I’d thought I’d be sad for the bear. But the education I received that day changed my perspective to be more all-encompassing. This animal had lived a wild bear’s life and was celebrated in its death. And the entirety of its body would be used — even more so than deer or elk, as bear hide is as valuable as bear meat.

I didn’t feel sadness but reverence, which the hunters also seemed to abundantly exude in that moment.

An Appreciation for the Hunted

I don’t think I’ll ever want to see a bear in the scope of my rifle or down the arrow of my bow. But I now have a more complete understanding of why people hunt bears. A bear kill holds a lot of promise in our freezers and on our dinner tables. And just like deer and elk, bears play a critical role in the ecosystem that humans help to manage.

Now more than ever, I look forward to the moments ahead when I meet my ursine pals in the woods. These forest royals demand the same sense of reverence in both life and death.