With modern geometry, a new shock placement, and a tune for lighter riders, if you’re looking for a playful and poppy quiver of one, and a tool for achieving your mountain biking goals and aspirations, throw a leg over the newest Juliana Furtado.

Mountain bikes are expensive, so you likely want one that can do everything well, with few if any compromises. If you’re a female rider who crushes everything trail, all-mountain, and enduro, take a serious look at this bike. And the Spicy Redwood color is a head-turner.

Juliana has had a Furtado in its line since the brand launched in 1999. But when it launched the 2021 Furtado this season, Juliana blew the doors off prior iterations, as well as most other bikes, men’s or women’s, in the mid-travel range.

With 130mm rear travel and 140mm front travel, this bike floated down chunky trails, clawed its way up steep climbs with tenacity and traction, wiggled through the tightest switchbacks, and popped off every rock and root along the way. It helped me along the path to a permanent life goal: to get more air.

In short: Juliana positions this bike as XC and trail. I position it from trail to enduro. Size-specific chainstays that are overall shorter than previous versions, coupled with a relaxed 65-degree headtube angle and 27.5-inch wheels, made this bike a playful, agile climber and gave it a solid, planted feel on technical, ass-over-teakettle-steep downhills. 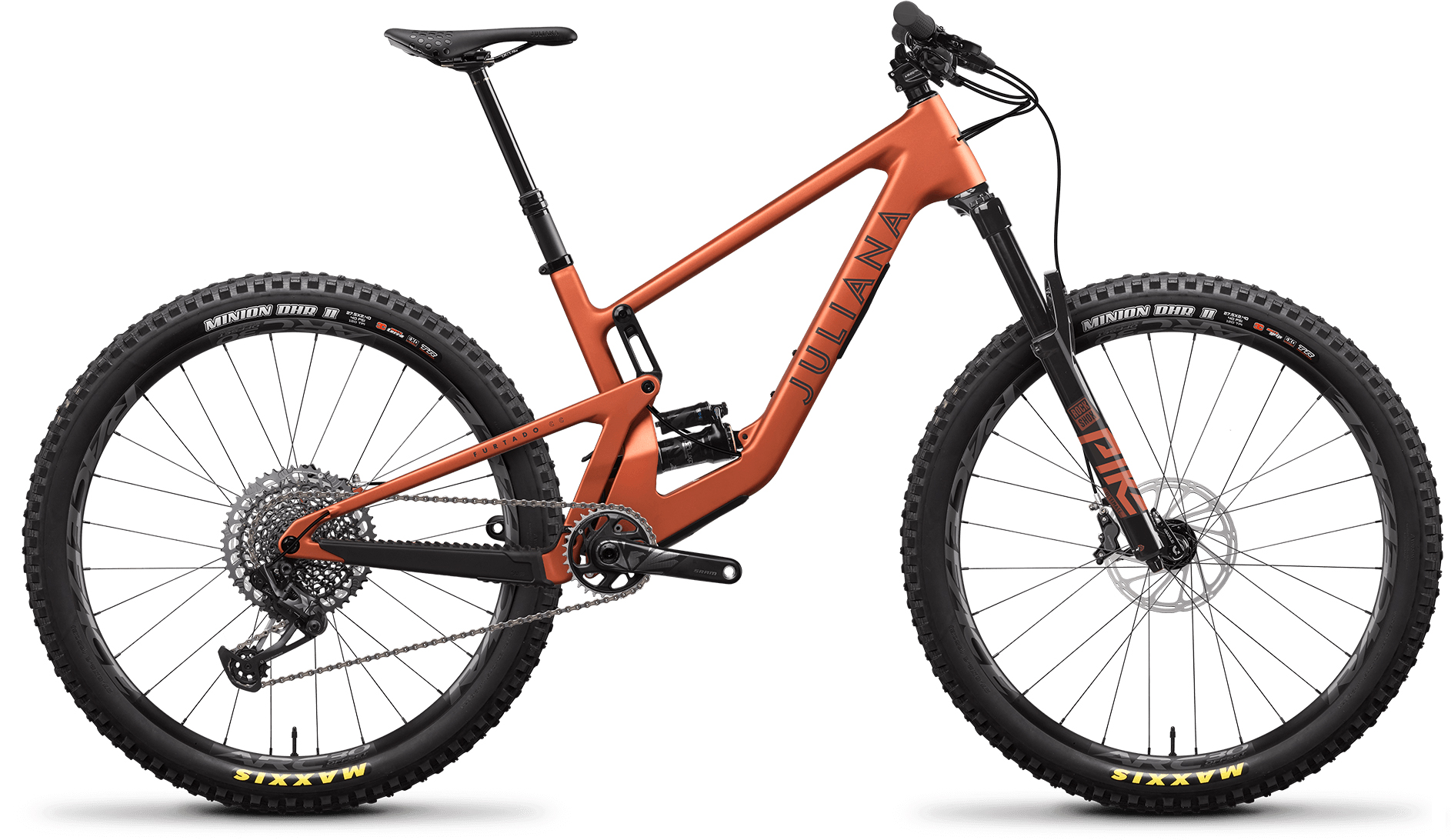 Juliana’s Furtado uses the same frame and spec as Santa Cruz’s 5010, paired with suspension tuned for a lighter rider as well as a women’s saddle and grips.

Once I honed in on the settings, I was able to use all the suspension on rides where I didn’t want to leave anything on the table, without ever bottoming out.

As a confident and aggressive female rider, I often pass over women’s bikes and opt for men’s. Honestly, when I threw a leg over this bike, I immediately had doubts. It felt much shorter than I’m used to, and I envisioned myself OTB (over the bars) on the first technical move.

Within minutes, I forgot about the shorter reach and I was just having fun, ripping berms and boosting off little booters. It was delightfully easy to get this bike off the ground.

VPP suspension and the bike’s stable geometry gave me the confidence to tackle moves I had hesitated on with riding other bikes. The shorter reach centered me on the bike, so I never felt like the bike was getting ahead of me in corners, which gave me more control. Jumping, the bike was under me. I was never off the back.

“We custom tune our shocks for lighter-weight riders with increased adjustability and offer size XS for smaller riders. Our geometries have always been designed with a low standover height, and this helps shorter riders feel more confident.” 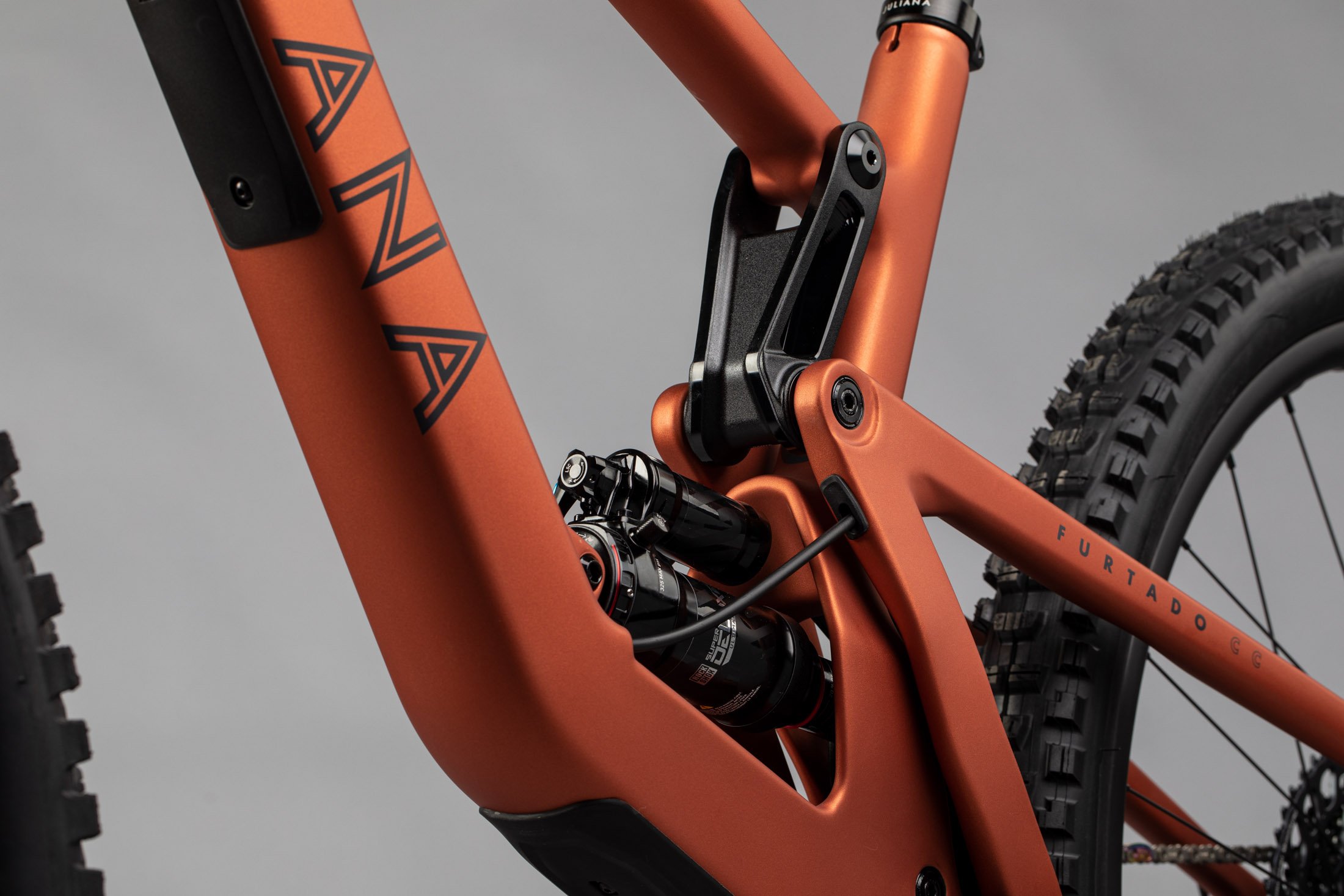 I had the pleasure of testing this bike in the highest spec, the carbon CC Furtado with an X01 build kit ($6,899). It comes with SRAM’s 52-tooth rear cassette. While I didn’t need the super-granny, I used it regularly on steep and pedal-heavy 2- to 4-hour rides in the Vermont woods.

As an eastern rider, I often swap tires immediately because many bikes have light tires that don’t do well in moist conditions. The Furtado, by contrast, comes specced with 2.4-inch Maxxis Minion DHRs front and rear, MaxxGRIP EXO TR in the front, and EXO TR in the back.

They held when the rocks were sweaty and powered through sandy, dry conditions just as well. I won’t be swapping these tires out until I wear them out.

As someone who more frequently rides a 29er than a 27.5-inch-wheel bike, I was impressed at how nimble this bike felt on both climbs and descents. I didn’t feel slower than riding on bigger-wheel bikes, and I rolled over obstacles smoothly. Plus, this bike has the makes-you-giggle 27.5 quick and easy-to-maneuver playfulness that left me smiling so hard it hurt at the end of every ride.

My only beef with this bike: It bobbed climbing unless I locked out the rear shock, which I did nearly every time I pedaled this bike uphill.

For my height, I also would have liked a longer dropper. I rode this bike in size medium, which is the largest Furtado available. It came with a 150mm dropper. If I owned this bike, I’d swap the 150mm post for a 170mm post to give me even more maneuverability.

Juliana: Mountain Bikes Made for Women

In 1999, mountain biking legend Juli Furtado teamed up with Santa Cruz to introduce what may have been the first women’s-specific mountain bike. And with it, she launched the Juliana brand.

While other bike companies were relying on 1950s data that said women universally have short torsos and long legs as a basis for women’s models, Juliana used Santa Cruz frames from the beginning, gave them women’s-specific saddles and grips, and made them in smaller sizes and different colors.

I appreciate how Juliana structured the brand — supporting and inspiring women on bikes to grow the sport. There is no pandering, no talking down to us, no telling women we should have lesser bikes than our male counterparts. They don’t claim women have universally different body geometry than men somehow necessitating a weird, upright geometry.

This Furtado uses the same frame as Santa Cruz’s new 5010 (which was launched on the same day). But Juliana bikes have different touchpoints than their Santa Cruz equivalents, like women’s saddles and grips.

And Juliana optimized the shock tune for a lighter rider. Even though I’m heavy for the shock tune, and perhaps better suited to a men’s tune, I never felt like I maxed out this bike’s suspension — or that the lighter tune compromised my ride. And small and light riders told me the tune let them get the most out of this bike.

At 5’7”, I’m not necessarily Juliana’s target market. I fit comfortably on a men’s medium frame in nearly every brand. But as a female rider who loves to ride, and who strives to keep gaining skills and conquering obstacles, I loved this bike.

The Best Mountain Bike Helmets of 2020

After countless rowdy test days, here are the best mountain bike helmets for all types of rides, from casual singletrack spins to enduro pursuits. Read more…

Saving…
My New Favorite Cycling Socks: Smartwool ‘Ultra Light Cycle Crew’
Virtual Racing: What It Is and How to Get Started
×