The massive outdoors and firearms trade event SHOT Show wrapped up last week and hundreds of knives made their debut. These are some of the best.

2016 was a strong year for cutlery. But 2017 looks better, if that is even possible. Most of the major players released gear at SHOT Show worth getting excited about.

If there is one knife universally beloved by the knife community, it is the Paramilitary 2. Its hard-use blade slices like a thin-bladed traditional. Plus, it carries more like a small knife despite its size.

The problem is that the long blade (3.44 inches) restricts legal carry in some states. For that reason (and to mix it up) Spyderco released the Para3. It has the same nested liners, same amazing Spyderco compression lock, and same strongly tapered blade stock as the Para2. The end result is a great EDC knife.

The Paramilitary 2 is one of the best production knives ever made. The Para3 will probably fall short of this distinction (the large blade in a small package really set the Para2 apart). But the little Para3 will likely be a very popular blade for everyday carry.

Take an all-time great, evergreen design in the Native 5 and add steel so hard, tough, and expensive that most production companies refuse to use it despite the obvious benefits, and you have a winner. Now give it a price tag under $200 and you have an insane buy.

Spyderco has released three times the number of Maxamet blades as the entire rest of the knife industry with the Mule, Manix 2 LW, and Native 5. None were expensive, despite Maxamet being very pricey to buy and incredibly labor intensive to grind. These ultra-hard steels mean they can be used for a very long time without sharpening. A good stropping routine means that, with normal use, you might not have to truly reprofile the edge for years.

To me, this is the production company knife to watch in 2017. Nothing else combines ergos, performance, and value like this knife. While the Para3 looks good, I’d bet on the Native 5 with Maximet becoming a favorite of “knife knuts” for years to come.

For about five years now, Zero Tolerance has made some of the finest production knives in the world. The ZT0055 is based on a custom knife from Brazilian blade savant Gustavo Cecchini and incorporates some of the coolest elements from his Airborne model.

Using a retractable, spring-loaded tab, the knife acts like a flipper but doesn’t look like one when open. Instead, it looks like only a Cecchini blade can–angular, futuristic, and undeniably cool. If anyone makes Lamborghinis in the knife world it is Cecchini, and here you get a Lambo at Honda Accord prices. This will hit for $275 MSRP and runs a 3.5-inch blade of S35VN steel.

To the excitement of knife fans, master knife-makers Dmitri Sinkevich and Todd Rexford finally collaborated on a design and it turned out beautifully. This knife evokes the same excitement of seeing a new yacht design or supercar — it’s wonderful to look at even if you’ll never own one.

That excitement hit the next level when ZT took that custom knife and translated it into production design with an amazing level of fidelity. There are few knives in the production world that have this level of machining and detail. The 0850 will cost $400 and runs a 3.75-inch blade of 20CV steel.

Who makes a perfect EDC folder? Debates aside, an Al Mar Knife is one of your best options. The Al Mar Ultralight series has been a light and wonderful carry for more than a decade. But the knives are expensive and lack modern amenities.

Kershaw took aim at both problems with its AM-3 collab. I have confirmed with Kershaw that the AM-3 runs a 3-inch blade with 8Cr steel. The knives are Chinese (not that different from the AUS8 of the originals), and a smidge heavier, but the result is a flipper, a liner lock, and a deep carry pocket clip with the same ultralight profile, blade shape, and handle. These will retail for around $45. There is a larger 3.5-inch blade as well, the AM-4.

CRKT has done very well with its collaborations. The Pilar is designed by Jespers Voxnaes and it is a very small, very affordable knife ($40). It clearly bears Voxnaes’s clean aesthetic and robust, useful feel. With 8Cr steel and a steel handled framelock, the Pilar is not expensive and feels great in the hand.

I was able to get a sample to review before it appeared at the show, and in a week of testing it’s been great. It is amazing in hand — a much-improved version of something like the Spyderco Lava. The handle just melts into the hand and the modified Wharncliffe blade shape does work without being pokey.

CKRT has been turning toward the higher-end recently. A few years ago the brand released a Ken Onion-designed blade called the Hi Jinx. The high-end titanium framelock flipper was its first blank-check blade. It was a huge hit, winning Overall Knife of the Year from Blade.

Aside from a few people with lock-stick issues, it was a tremendous success and proof that CRKT can play with the big boys in the high-end. The downside was that the Hi Jinx’s limited numbers made it hard to get.

With the Hi Jinx Z, now just about anyone can grab one, albeit with significantly less expensive materials. Instead of the German D2 Sleipner steel you get 1.4116, a steel found on Victorinox Swiss Army knives. The framelock is gone, replaced by a liner lock, and the handles are FRN instead of titanium.

But the overall package has the same profile, a great flipper thanks to IKBS bearings in the pivot, and a deep carry pocket clip. The knife retails for $80, significantly less than its high-end older brother.

There are a handful of knives in the Cold Steel lineup running HTR, but the Khan ($70 retail) seems to be the intentional starting point, with a simple Tanto blade shape, a 3-inch blade of AUS-8 (slightly disappointed in the steel choice here), and a blue G10 handle. Some of Cold Steel’s offerings are impractically large, but the EDC buyer should note the Khan. It’s also the perfect segue into a new deployment system.

A few years ago, Cold Steel adopted the Andrew Demko-designed Tri-Ad lock as the foundation of its knives. Then a year or two later it upgraded its steel from the decent AUS8 to the superb CTS-XHP. Now they are introducing a new deployment system, HTR. The terraced ring around the thumb hole gives you more purchase than a thumb hole alone, but smoother action than a thumb stud. 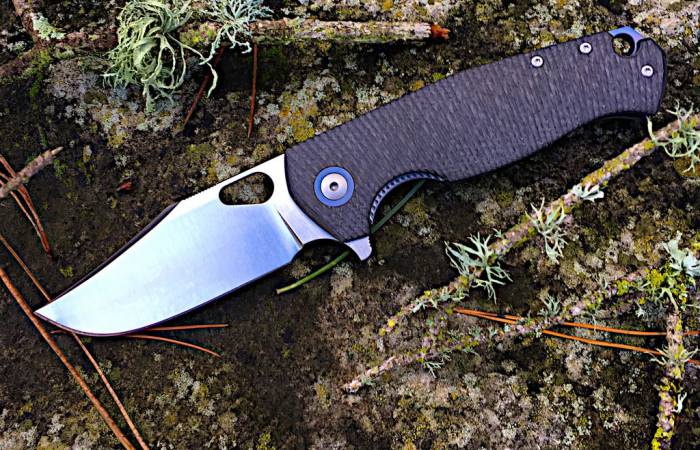 Giant Mouse is a U.S. company that collaborates with two Danish designers and has its knives made in Italy. The GM2 is its new folder for 2017 and it’s a winner on paper.

Jens Anso (“An-SUE”) and Jesper Voxnaes did the outlines and Viper built the blade. It runs both a flipper tab and a thumb hole (though the design clearly wants the flipper used), a bearing pivot, a 3.3-inch blade of M390 steel, and it runs a beautiful clip point. It comes in either titanium or carbon fiber. The price through the Giant Mouse website is $325, very much in line with modern high-end production knife prices.

Ka Bar launched a single item at SHOT Show — the Jesse Jarosz Choppa. The large fixed blade aims directly at hard use. Ka Bar’s Becker line has been a staple of fixed blade fans for more than a decade, proving that Ka Bar knows how to make hard use knives. Jesse meanwhile has been honing his style for a few years producing wonderfully simple, high-performance user customs.

The Choppa runs 1095 steel, a polymer handle, a nylon sheath, and a dead simple drop point blade. The blade is over 9 inches long and just under 3/16″ thick, giving you plenty of blasting power tackling tough stuff. The Choppa’s MSRP is $145 and the street price is around $110.

My Thoughts On The 2017 Knives & Companies

Where’s Benchmade? I’ll address that question now. While the brand did introduce some new products at SHOT, they failed to impress. We hope to see more exciting advances from the brand in the future.

Overall, Spyderco and KAI USA (the parent company to Kershaw and ZT) had the strongest showing. Cold Steel has a lot riding on the HTR system. If it is good, the brand will have a good year. CRKT’s Hi Jinx Z is a great idea, adding another, more reasonably-priced blade out of a smart design. A lot of the higher-end companies will also show at Blade, but given what we have seen so far this looks like it will be a great year for many knife brands.

Up Next: In Minnesota, Worshiping Winter At ‘The Great Northern’