Every year in January, knife companies show off upcoming wares to the world. This edition of The Cutting Edge previews the brand CRKT for 2019.

CRKT released its new 2019 stuff before the industry trade show, SHOT (Shooting, Hunting, Outdoor Trade) Show, which is going on this week in Las Vegas.

Overall, buoyed by the successes some of its more expensive offerings, CRKT has made a more aggressive push into the higher end of the knife market. It still uses a lot of lesser steels like 8Cr, 1.4116, and the like. But it also added a lot of D2, which is excellent budget steel. Furthermore, its innovations this year seem less gimmicky and more functional than those shown in the past. As it releases more knives than most other companies, I’m only going to hit the highlights.

There are two major pieces of tech for CRKT this year: Kinematic deployment as seen on Joe Caswell’s custom morphing karambit (and its CRKT brother the Provoke) and the Deadbolt lock developed by Flavio Ikoma, a longtime CRKT collaborator.

CRKT’s trademarked Kinematic deployment is a fundamentally different kind of knife, not a folder so much as a collapsing knife. In essence, Caswell used a pair of linkages to create a knife that opens when squeezed. CRKT reports that this will be used on other knives in the future, which is excellent. The karambit is a very task-specific blade shape — and that task is gutting opponents.

The Provoke ($200) is an amazing achievement in production knives. Its bizarre appearance, deployment method, and innovation are really high watermarks. It’s not so much a folding knife as it is a collapsing knife. Here is the knife closed: 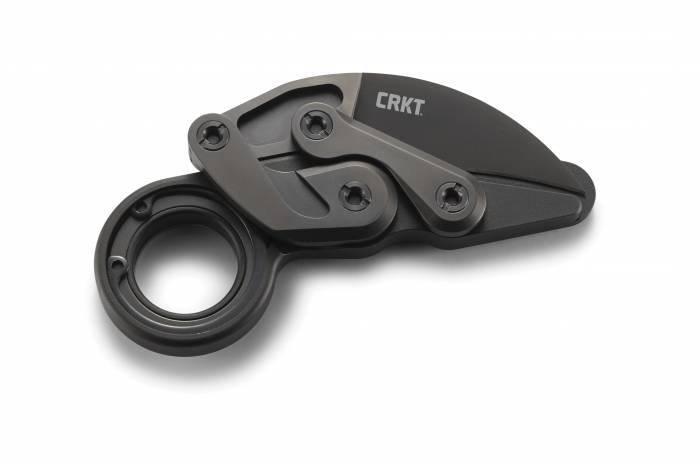 And here is the knife when opened:

So, is it a curio or an actual tool? Only time will tell. The knife has a 2.25-inch D2 blade and includes the innovative zero-profile pocket clip found on the Caswell custom original.

The very large Seismic ($150), above, shows the Deadbolt locking system. Superficially, it functions like the classic Poehlmann Axial lock of Gerber and Lone Wolf fame. Just press the pivot to disengage the lock, but its guts are vastly simpler. This is good because no one could make the Axial lock production practical — Gerber, Lone Wolf, and Benchmade all tried and failed.

In this iteration, a spring pushes a C-shaped piece of metal into holes on the blade and liners, locking the knife open. You push the pivot to close, which disengages the C-shaped piece of metal. Overall, this design and its intuitive nature are very promising. Locks that can be disengaged without placing your fingers in the blade path are good. The only current knife with the Deadbolt lock is the Seismic, a large, heavy-duty flipper from Ikoma.

The innovation from a few years ago, Field Strip, shows up on three knives: the Ken Onion-designed Slacker ($100), the Lucas Burnley-designed Prequel ($70), and, finally, the Russ Kommer-designed Monashee ($80).

Although the Prequel is the eye-catcher, the slim, simple design of the Slacker makes it the winner among the Field Strip knives.

It’s a substantial upgrade from the original. The 2.25-inch blade has been replaced with a 3-inch blade. Both versions have a G10 handle, and the 8CR uses high-carbon stainless steel instead of D2 steel.

The last knife that looks promising is the Erich Ochs (pronounced: OAKS)-designed Avant ($90). This is a decidedly upscale knife for CRKT, sporting brass accents and carbon-fiber handle scales. Unfortunately, CRKT opted for lesser steel, as the knife runs 8CR14MoV.

The Provoke is a marvel. Having watched the knife industry for years, I would have never imagined a production company making this knife on a large scale. Whether or not it’s a success is probably beside the point. It’s a clear indication that CRKT is going to make a play for the higher end of the market and do so in the classic CRKT way — innovation.

The Slacker is a very conventional design, but sometimes simple is best. The Avant is a beautiful design and could be a real winner with better steel — something even relatively inexpensive like CPM-154. It seems like a mistake to go with cheap steel, as that eliminates the enthusiast while the price tag eliminates the casual buyer.