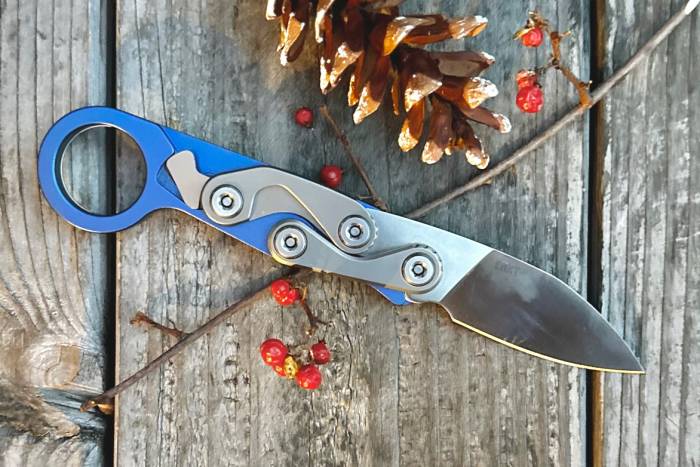 The CRKT Provoke EDC uses a technology first employed in Karambit knives and implements it in an everyday carry tool. The result is a fun, lightning-fast tool.

Karambit knives were first invented to be used in agriculture, for raking roots and sowing seeds, but quickly transformed into very effective fighting knives, as they resemble a claw. They’re so effective in fighting that Karambits have been adopted by various militaries worldwide.

But there’s not a lot of practicality to them in terms of an EDC knife you would take camping unless you go camping in the jungles of Borneo and have to defend your honor in a knife fight.

In 2020, CRKT came out with the Provoke, based on Joe Caswell’s “Morphing Karambit” knife. It was a modern take on the time-tested fighting knife that utilized a revolutionary deployment mechanism that CRKT coined “Kinematic.” It could fire the blade out and lock it up tighter than a bank vault in less than a second — without the use of springs, buttons, magic, etc.

The Provoke marked the first time a big-name outdoor knife company brought such an innovative and effective fighting knife to market and it’s proven to be widely successful for CRKT, spawning a whole family of Provokes in different sizes and color combinations.

Fast forward to 2023, and CRKT is expanding the Provoke line to include the Provoke EDC ($175). Unlike its relatives, the Provoke EDC isn’t specifically designed for making someone the local fighting legend or the ultimate sci-fi soldier; instead, it’s aimed at the outdoor crowd as an effective, modern cutting tool that carries easy, deploys fast, and locks up so well that it essentially becomes a fixed-blade knife.

In short: Launching today, the CRKT Provoke EDC blends a unique design of Karambit knives with the utility of an EDC blade for a knife that will stand out in your collection.

For such a complex knife, the Provoke EDC is fairly simple in terms of its build. It utilizes a piece of machined and anodized aluminum for both its frame and handle.

It has a leaf-shaped D2 blade, which is bolted to the frame by two steel links that keep the blade from deploying in your pocket. These links also provide the leverage and increased force to thrust the knife open.

The pocket clip for the Provoke is machined into the back of the handle and is designed to slide into your pocket so that it can be pulled up and out and deployed all at once. This advanced action (brought over from the Provoke) may seem a little overbaked in an EDC setting, but it’s still very effective and the lock-up ensures that the blade won’t close up on you when you’re putting in work.

My first impression of the Provoke EDC was that outdoor folks and EDC adopters finally had the fidget fix they always wanted — opening this knife is as addictive as opening and closing a Zippo lighter. If you don’t know what that’s like then you’re either under 30 or were raised in a cave.

It easily fits into the fifth pocket of your favorite Carhartt pants and flicks out insanely well. In fact, not only is it faster than any automatic knife I’ve ever had the pleasure of playing around with but there’s also nothing that can go wrong with the way the Provoke EDC operates unless you superglue it in place or try to saw it in half with a hacksaw.

CRKT uses D2 on the other Provoke models and I appreciate that they stuck with it here. D2 is an old-school, tough tool steel that went out of fashion once more corrosion-resistant steel became all the rage.

I’ve found D2 to hold up nicely in all environments as long as it’s taken care of. You won’t need to sharpen it all that much, but make sure to wipe it down and dry it off before you put the knife away for a prolonged ride in your pocket.

One improvement of the Provoke EDC compared to the Provoke is the design of the lock mechanism. Having owned Caswell’s original MKV2 design and the original Provoke, I can tell you that the lock was effective, but it was not easy to use or intuitive.

For the EDC variant, CRKT has turned it into a lever that lives in a cutout in the aluminum handle that can be easily operated by your thumb. That very same thumb you used to deploy the blade.

The CRKT Provoke EDC is specific in the way it opens and operates. In layman’s terms, that means there is a bit of a learning curve in both opening and using the knife. This shouldn’t deter people from buying one, because once you get used to it, the Provoke EDC is an incredibly fun knife to use — cutting, slicing, and piercing really well.

Out of the box, you need to switch up your handhold when you go from opening to using the knife, but that’s not a big deal. For over a month, I messed around with different ways of holding the Provoke EDC.

I’ve almost perfected a hold where I put my pinky in the rear handle hole instead of my index finger, a carryover from when you’re using a Karambit for fighting (I have a very scary past), and it works well enough. If I’m ever in a situation where I can’t switch hands, it will prove useful but otherwise, what’s the rush?

Out of everything I did with the Provoke EDC, I enjoyed prepping food with it the most. I subconsciously appointed it to be the veggie-slicing knife one afternoon outdoors with my kids and the end result was the best Chicken Trail Tacos (recipe below) we’ve ever eaten on a walk through the woods. Overall the Provoke EDC is a fun everyday carry knife for those random tasks that pop up throughout the day.

Think about it: How many other parents get to say they helped open their kids’ Christmas gift packaging with something so innovative and revolutionary?

CRKT was kind enough to slip me a Provoke EDC on the sly and it arrived around Thanksgiving, which allowed me to play around with the knife for well over a month before I finally sat down to write this review and get it published when the knife launches.

I carried the Provoke EDC around like any other knife I would use as an EDC, and it did everything I expected it to do, with the added benefit of figuring out which way of holding and deployment worked for me. I can’t say this enough: It’s a fun knife. Especially if you’re someone who likes to fidget with widgets.

Even with my background in engineering and knifemaking, I’m still fascinated with the Kinematic mechanism. I know it’s all leverage, but it’s well thought out and probably less complex than I’m making it.

Overall, do I think this knife is for everyone? No. Because it’s not a traditional knife and folks are resilient to change. But maybe it’s time those folks started thinking outside the box about what they’re looking for in their everyday carry. After all, CRKT saw a way to turn a fighting knife into a reliable outdoor knife with the added benefit of being able to defend yourself when someone tries to cheat you at UNO around the campfire.

These are like street tacos but made on the side of the trail. The only things that really need to get cooked here are the peppers and onions, but I throw the chicken in the pan after those soften up so everything is nice and warm on a cold day. They actually take longer to eat than they do to cook.

The real trick here is to keep the tortillas warm so they roll or fold without cracking. I put them in a ziplock bag and give them to my kids to keep warm while we’re hiking to our cooking spot.

So, let’s keep this simple: Slice up the peppers and onions and throw them into your pan. Stir them around a bit until they soften and toss in the chicken. Count to 100 and then put that mix into your warm tortilla and enjoy. 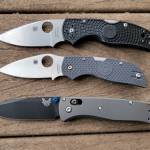 The Best Pocket Knives of 2022

We reviewed the best pocket knives of 2022 with options for every budget. Top picks include Spyderco, Benchmade, and more. Read more…