If you’re not from Europe, you’ve probably never heard of Lidl – even though the value supermarket chain has more than 10,000 stores across 27 countries.

The brand dipped its toe into the American market just last summer, offering an alternative to discount chains like Aldi and Trader Joe’s. Lidl opened a string of retailers along the east coast, from New Jersey down to Georgia. And while it’s not yet a household name, there’s a chance you could wander in sometime for low-priced snacks, produce, and … hiking gear?

Believe it. Last month, Lidl launched a private line of outdoor gear designed to undercut budget offerings from brands like Columbia. The line targets hikers with everything from hiking boots and trail runners to base layers and headlamps. And all of it’s under $30.

Let’s start with the big disclaimer: We have not tried this gear. So we can’t say whether it’s a great deal or not, merely that the products are astoundingly inexpensive.

Lidl didn’t say how it achieves the crazy low pricing. But grocery chains like Aldi and Trader Joe’s cut prices by keeping suppliers secret and buying fewer stock keeping units per product type (e.g., more jars of only one brand of peanut butter). Lidl’s approach appears to follow a similar model, with one exception: When it’s gone, it’s gone. While it focuses on food items, the brand offers a rotating array of non-food products that update every Thursday and Sunday. 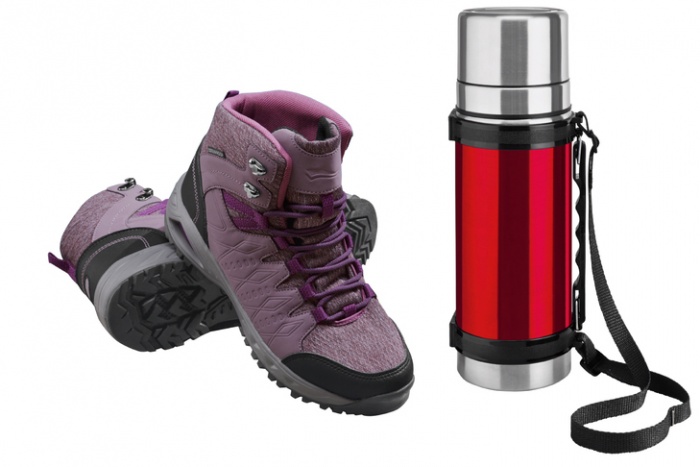 On Feb. 15, Lidl launched its first run of hiking gear – and the prices were crazy. Highlighting the hiking launch were women’s and men’s hiking boots. They sported a waterproof-breathable “TEX” membrane, EVA foam midsole, and lugged tread pattern. And while that sounds like most $200 boots on the market, the unimaginatively named “Hiking Boots” cost $30.

There were $15 synthetic base layers for men and women, an $8 LED headlamp (with three-year warranty), $25 running/hiking jackets, and $30 trail running shoes for women and men.

And Lidl told us there’s more. Cycling apparel, home fitness equipment, and camping gear – the brand sees it all. Most of its athletic gear carries the Crivit (value) and Crivit Pro (performance) labels. And it’s worth mentioning that Lidl last year equipped Tour de France riders with its Pro line – so it can do gear well.

Of course, whether the waterproofing lasts on a $30 pair of boots remains in question. And we don’t expect a $25 jacket to outperform a $200 technical shell. But if Lidl’s gear does hold its own reasonably well, it could help make basic outdoor pursuits more accessible to those on a budget.

The brand told us it’s continuing to open new stores in the U.S. See if there’s a Lidl near you. If you try the Crivit gear, leave a comment and let us know how you like it!