You might buy your next bike in a bar, the back of a van, or someone’s living room. It may sound strange now, but bike shops are evolving in wild ways to remain relevant.

Across the nation, many traditional bike shops are closing as consumers increasingly buy bikes and gear online. But some shops are finding new ways to survive — even thrive — in the digital age.

Perhaps nowhere is that more evident than in Indianapolis. Over the last year, brutal weather and greater competition have forced multiple shops to shut down. But that harsh environment also fostered an interesting transformation among bike shops. Few outlets are now willing to only sell bikes and offer repairs; in order to remain profitable, they’ve looked to alternative non-bicycle revenue streams and ways to reach customers.

Longtime local fixture Gray Goat Sports may be one of the best examples of the business change. Saying, “the old model is dead,” owner Brian Gootee is planning a big shift with the two new shops he’s opening in the next year.

To reach customers and propel his bike shop, Gray Goat is partnering with Upland Brewing Company to open a large tap room and restaurant with the bike shop in the gentrified Fountain Square neighborhood next spring. And the other shop, opening in the northern suburb of Carmel, will likely feature a smaller tasting area with Upland beer. If the partnership proves fruitful, Gootee will likely retrofit his other stores with bar areas as well. 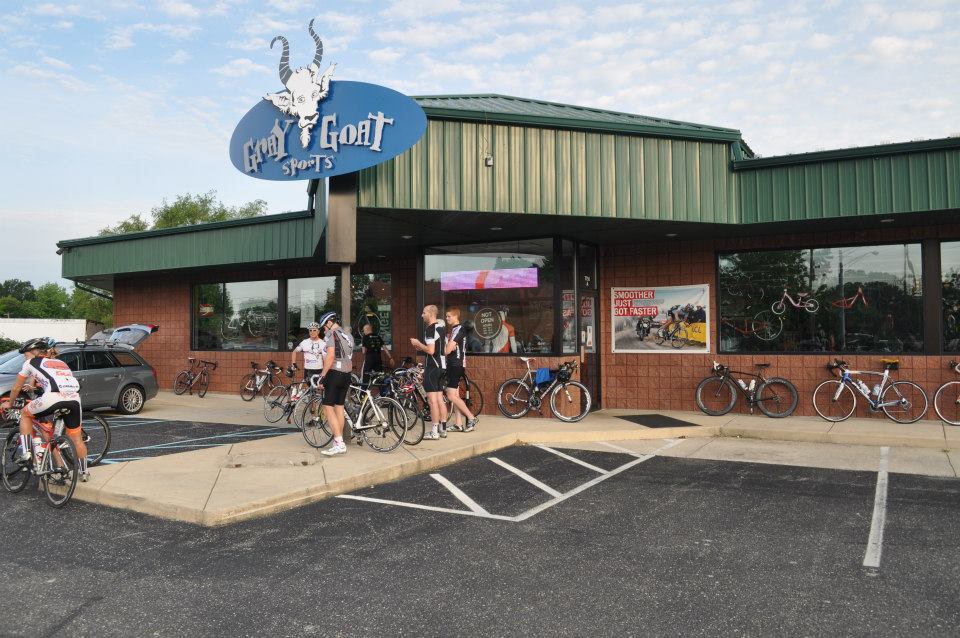 “We’re trying to engage people in new and different ways,” Gootee said. “This is going to bring us new customers, people we probably wouldn’t have seen in the past … We’ve been successful for quite a while now, but the industry has changed so much, and we needed to change how we do business.”

While the bar/bike shop model isn’t new — similar shops have been open in Colorado, California, and North Carolina for years — more and more shops are looking to dip their toes into the beer. According to Matt Powell, a retail expert and senior industry advisor for the retail-tracking NPD Group, this concept not only adds a secondary revenue stream, but it also helps create a sense of community that customers can’t find on the Internet. He thinks of it like Apple stores.

“Customers could buy the products online,” he said, “but they go to the Apple Store because they want to be around [people like themselves].”

Still, while Gootee looks to expand the reach of his business, another shop went in the opposite direction. A 20-year industry veteran, Jonathan Juillerat decided to forgo another traditional shop gig when he left his last job. Instead, he created Bluegrass Bicycle Company, an appointment-only shop — and used vinyl record store — run from the home he shares with his wife and fellow mechanic, Tania Juillerat.

“People usually flip out when they learn about us,” Jonathan said. “But this isn’t anything new. People used to operate businesses out of their home all the time. A lot of our older customers remember when they or their parents would go to the local mechanic who worked out of their home garage or a bike shop under the owner’s apartment. Millennials love it because they think it’s new and hip.”

Working from home means much lower overhead, but there are other benefits as well. About a third of the clients are women, which the Juillerats attribute to not only Tania’s presence but also the shop’s homey appeal. And because they see customers individually, the Juillerats switch out displays and products catered to that person, a process they call “micro-merchandising.” Perhaps most importantly, they specialize in customers that feel unwelcome in other stores.

“We had a 70-year-old woman come in a while ago,” Tania said. “She was an experienced cyclist, but she had gone to three stores and wasn’t treated with respect at any of them. She had a $3,000 budget for a bike she planned to take on a long-distance touring trip, but the staff kept on trying to put her on hybrids.”

According to Tania, the woman wound up buying a $5,000 bike from their shop along with another $5,000 of accessories.

With the success, the pair has become evangelists for the home-shop movement, even helping a former co-worker, Chris “Big Daddy” Music, open his garage-based shop on Indianapolis’ northeast side.

But all evolution comes at a cost and the retail world remains tough, even for the new concepts. Joe Cox opened up the latest iteration of his namesake shop, Joe’s Cycles, less than two years ago. His new location doubled as a coffee and sandwich shop, which he hoped would sustain him over the harsh Indiana winters.

But while business was steady, Cox unexpectedly announced he was shutting his doors this month. He cited Gootee’s Gray Goat brewery location — about a mile away — as one of the factors. He plans to move to Michigan’s Upper Peninsula within the next few months and open a new shop with a similar model in 2020.

“The concept was good, but there are so many unique challenges here,” Cox said. “We should have a much larger high-end market here, but everyone has a buddy that works for SRAM or Silca or Shamrock, and so they get their bikes and parts at a huge discount. There’s no money here because the scene is feeding on itself.”

Meanwhile, Brian Brackmeyer decided to forgo the brick-and-mortar entirely with his Velofix van. But after less than a year in business, he decided to sell. He declined to go into detail about his decision, but acknowledged that “consumer habits and tastes are changing, and I’m not sure if we have them fully figured out yet.”

Despite all the pressures to reinvent, at least one local shop is literally doubling down on the old model. Bike Line has two locations in the Indianapolis area. But it recently tore down its building in the Broad Ripple neighborhood to construct a bigger, two-story facility. Brother-owners Charlie, Bill, and Jimmy Revard are gambling that customers still crave a more traditional experience, even after nearly 40 years in business. 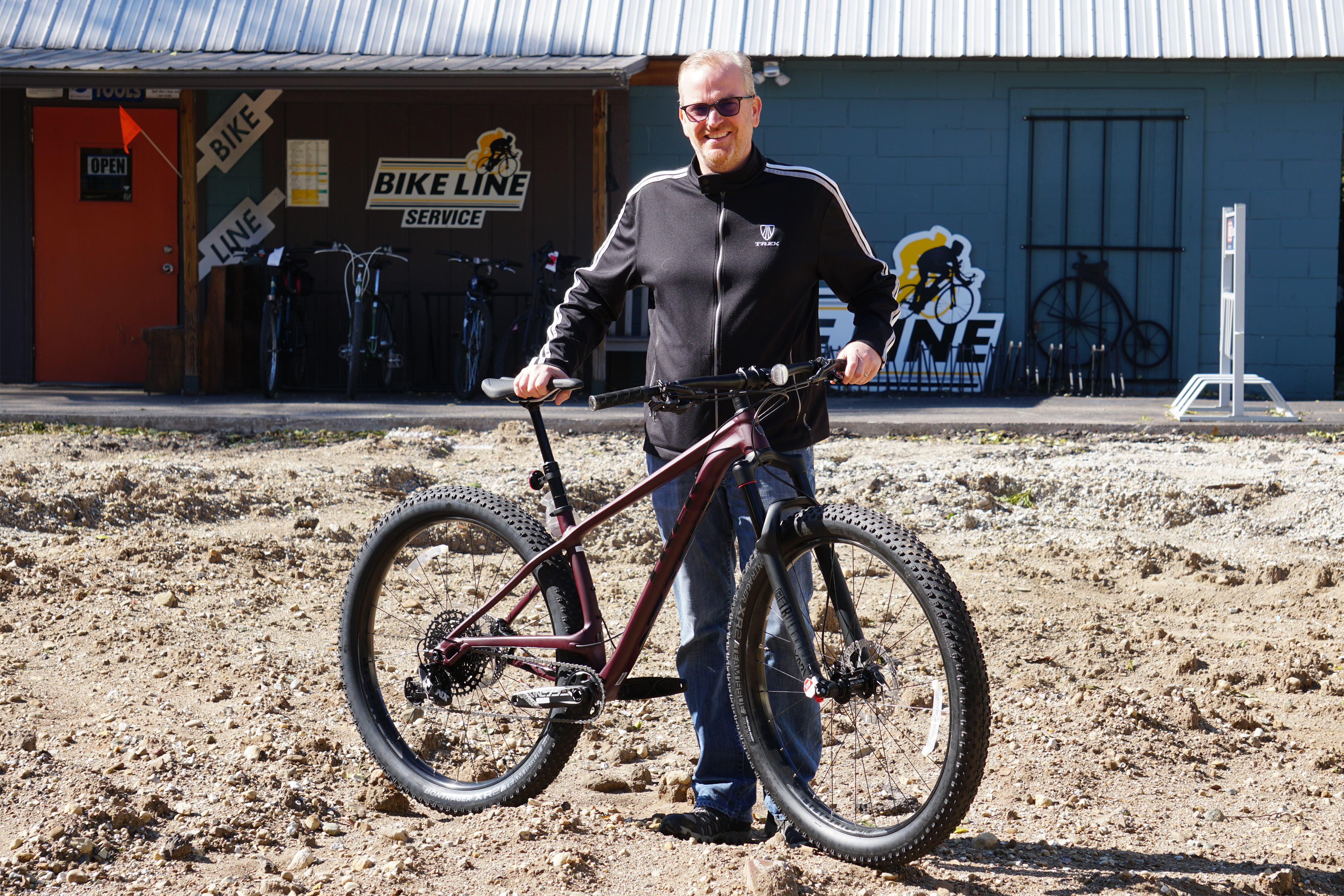 “We know what we’re doing,” Charlie said. “We didn’t stick around this long by accident. When people are dropping so much money on a new bike, they want to test ride it, to touch it.”

Powell believes the only stand-alone shops that stick around will have significant backing from big-name manufacturers like Trek, Specialized, and Giant. Both he and Jonathan Juillerat acknowledged that while the traditional shop may never disappear entirely, that particular business model has likely seen its best days.

“A lot of people don’t believe that an institution that’s been around as long as the neighborhood bike shop could ever go away,” Juillerat said, “but they also said that about Sears and daily newspapers.”