Ski binding manufacturer Marker today announced the Duke PT, a welterweight ski touring binding meant to tackle big mountains. It will give consumers an option to consider versus the Salomon SHIFT, which disrupted the industry last year.

The Marker Duke PT is a major evolution in Marker’s iconic Duke ski binding history. The new PT model gives freeride skiers the ability to skin uphill using pintech-compatible boots. But it transitions to a step-in alpine-style binding with the addition of an optionally removable toepiece. 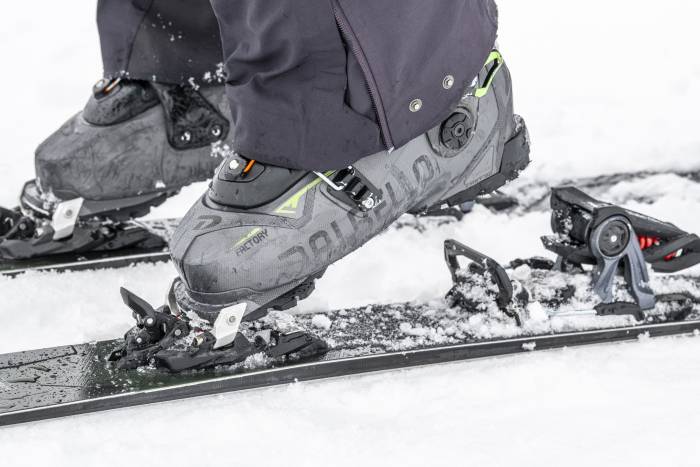 This is a major departure from the historical Marker Duke construction. The Duke, introduced in 2007, was one of the earliest “frame” bindings. It allowed skiers to skin uphill with alpine boots. That’s because the entire binding (on a frame) released from the back with the flick of a switch.

They became popular in the sidecountry because they allow skiers to use traditional alpine boots while touring.

But pin bindings grew in popularity, and many more boot offerings allowed skiers to transition between uphill and down in lighter and more versatile setups. Frame bindings have lost a lot of their luster. They’re heavy and tend to make skiing uphill a heck of a chore. 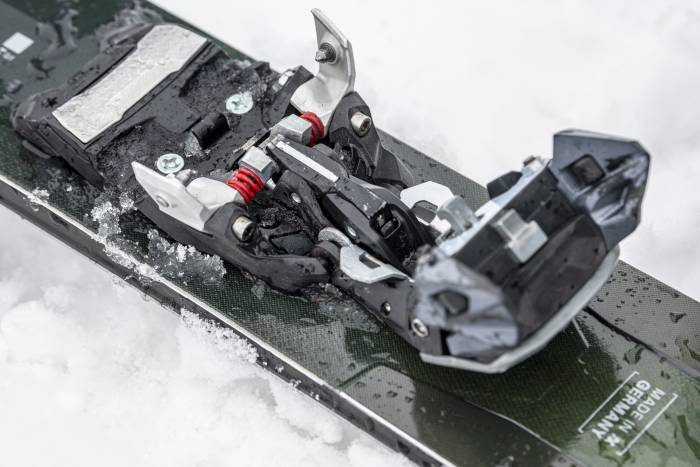 Then last year, Salomon introduced the SHIFT binding, which took the freeride world by storm. It allows skiers to use pins on the uphill, then transforms into a traditional alpine step-in binding on the downhill. It sold out early in the 2018-2019 season.

Marker is a big name in downhill ski bindings and a dominant force in the purely downhill realm. Marker’s new Duke PT offering seems to react to the growing desire of skiers to skin uphill at a modest pace, then ski big lines down tough terrain in the backcountry.

As with the SHIFT binding, it does not rely on pins for downhill performance. So skiers get a fully DIN-certified downhill binding with standard release mechanisms for safety and performance with the added benefit of the good uphill performance of pins.

The Marker Duke PT accomplishes this goal by using a removable toepiece for downhill skiing. The toepiece allows skiers to step into the binding as one would an alpine setup.

But for uphill, you can remove the toepiece and use pins to skin uphill. Note, the toepiece is optionally removable. So you can use the pins with the toepiece still attached. By removing it and stowing it in a pack, you save weight on your feet on the uphill. 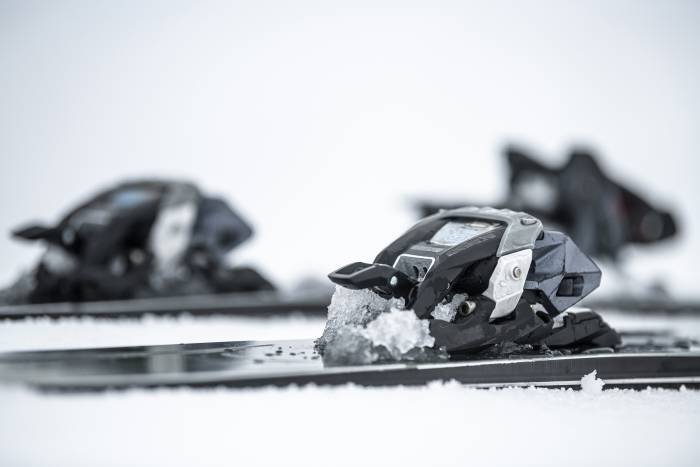 To compare this to others on the market, the Salomon SHIFT weighs 850 g. Cottage manufacturer CAST also makes a removable toepiece binding that weighs in at 1,000 g uphill and 1,530 g downhill.

None of these really compete on weight with pure pintech bindings like the Dynafit Rotation, the brand’s current freeride offering, which weighs just 605 g. 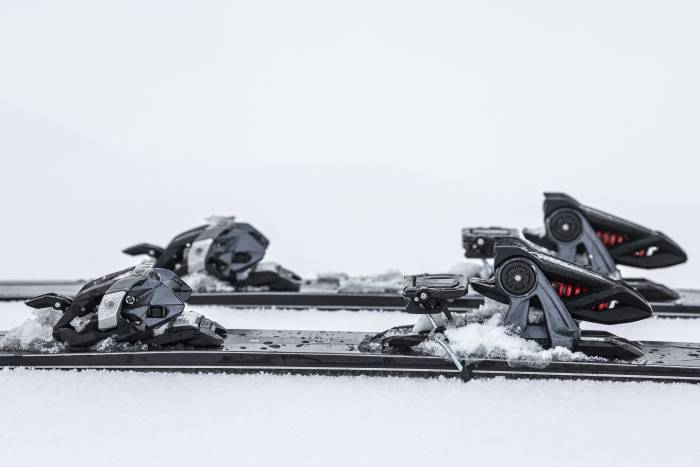 We haven’t seen the PT in person yet. But it looks promising if you don’t mind having removable pieces on a binding. The brand sent out a pretty detailed press release today. Here are some nuggets from it:

In ride mode, it provides uncompromising downhill performance with full safety release properties up to DIN 16. In the event of a fall, the gliding AFD (Anti Friction Device) aids the lateral release unhindered by dirt, snow, and ice. Switching the binding to hiking mode is simply a matter of unlocking the upper part of the toe piece and rotating it forward. In uphill mode, you have the option of saving 250 grams of weight per binding at the foot by removing the toe sections and stowing them in your backpack.

Alternatively, the toe housing sections can be locked in the forward rotated position so you can quickly revert to downhill mode after a short uphill section. To switch to downhill mode the toe housing is clicked back onto the base plate. It locks into place thanks to Auto Quad Lock technology, just by stepping into the binding, without any extra action required by the skier.

Sounds solid. I’ve never been a fan of removable parts, especially for gear that you use in deep snow. But the option to keep the toepiece attached is very helpful:

Pin binding technology is integrated in the base plate underneath the toe housing section and operates in much the same way as the KingPin and Alpinist models from Marker. The toe piece also has Sole.ID technology, just like other products in the Royal Family. This makes the binding compatible with all boot sole types falling under the alpine (ISO 5355), touring (ISO 9523), or GripWalk (ISO 9523) norms. 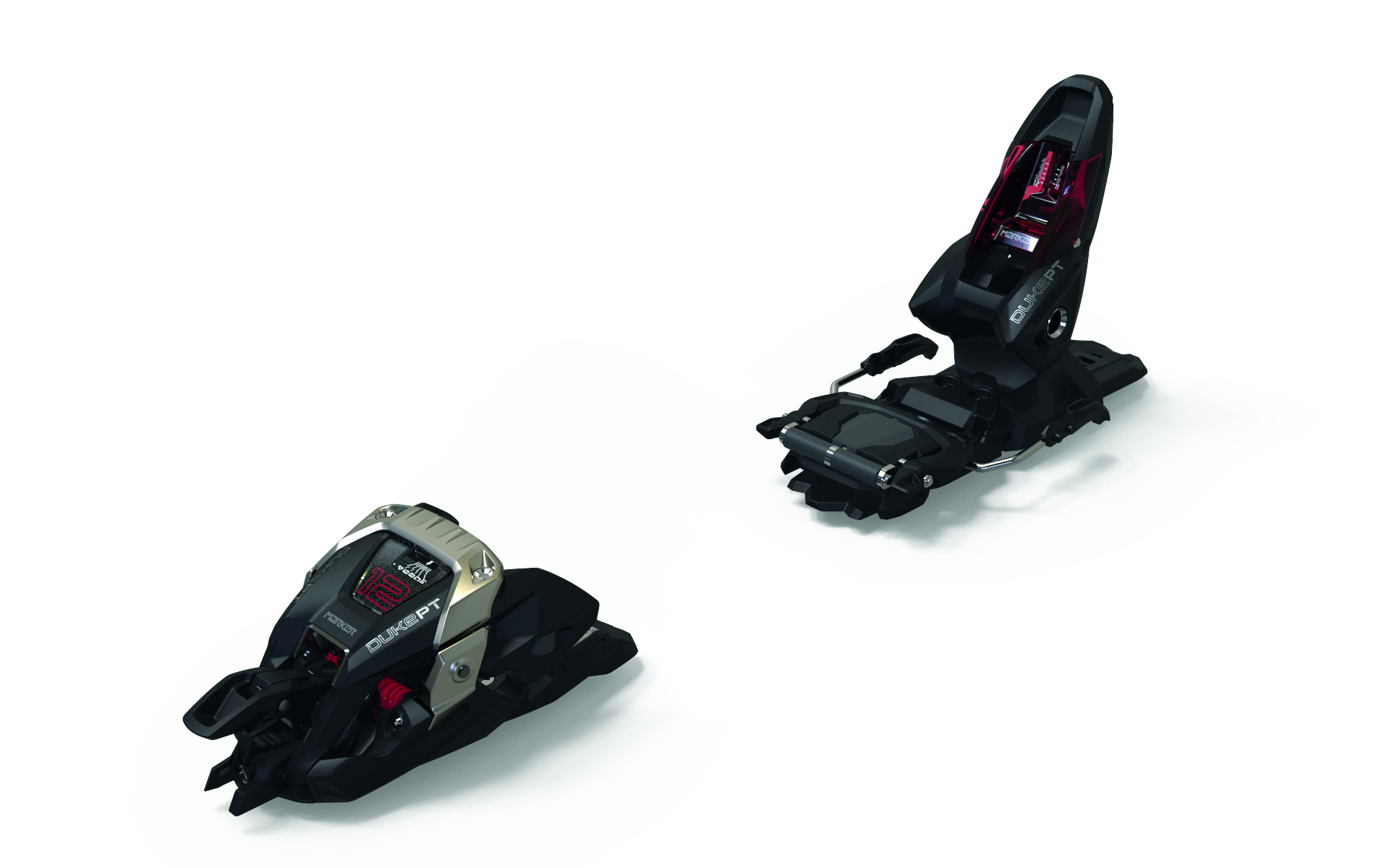 That covers a vast array of boots. It’s worth noting that, just like the SHIFT, you’ll need pintech-compatible boots to skin uphill. So these won’t replace frame bindings for those who want to trudge around sidecountry with alpine boots.

Skiers using the Duke PT 16 will enjoy the superior holding power of the Inter Pivot Heel known from the former Jester and Duke models, and it has been redesigned to offer an easier step-in function. With its high-quality magnesium housing the heel covers release values from DIN 6 to 16.

Also worth noting, the Duke PT has a climbing aid of 10 degrees.

We look forward to getting our hands on a pair of Duke PTs in the near future to see how they stack up to the SHIFT and other bindings on the market.