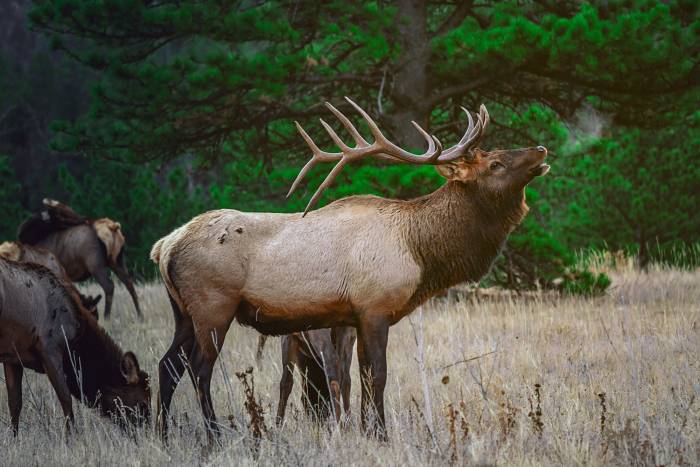 As chronic wasting disease (CWD) continues its initial expansion into Montana, the state seeks to root out the infection’s virulent spread. Similar to “mad cow disease,” CWD is a fatal neurological disorder that affects deer, elk, and moose.

The disease affects animals in some areas of the Midwest and large parts of the Rocky Mountains. While there are no confirmed cases of CWD spreading to humans, no cure exists and officials worry an outbreak would devastate game herds. And until recently, the spongiform encephalopathie responsible had yet to rear its head in Big Sky Country. But that changed in November when Montana confirmed its first CWD case.

The wildlife issue belies simmering tensions between the two frontier states. Despite continued warnings from Montana about Wyoming’s supplemental elk feedings, the Cowboy State has steadfastly taken a hands-off approach to its wildlife management. Following the positive test, Montana’s Fish and Wildlife Commission ramped up urgency, asking its neighbor to the south to immediately cease feeding elk or risk “a catastrophic disease event.”

Wyoming introduced the supplemental feeding program to the Jackson area in 1910 in an effort to reduce the winter mortality of elk from lack of food. But today, the program continues to address elk herds’ reduced migration and feeding grounds in the wake of expanded rural and urban development.

In a letter dated December 7, the Montana Fish and Wildlife Commission asked for the Wyoming Game and Fish Commission’s help to halt the winter supplemental feeding program.

“Scientists agree that, when CWD hits the feed grounds in Wyoming, the unnatural concentrations of wildlife in the feed grounds will accelerate the spread of the disease,” wrote Dan Vermillion, chairman of the Montana Fish and Wildlife Commission. “Some of the animals that spend the winter months on the feed grounds eventually co-mingle with Montana wildlife, and this interaction becomes a disease vector for Montana’s elk and deer populations.”

The letter from Montana comes off as a collaborative approach that creates mutual benefits for both states: “…it is with sincere humility and respect, that we ask Wyoming to help us address the CWD threat. Neither state can solve this on our own, and we are writing to ask for your help.”

But in an interview with the Mountain Journal, Vermillion was less magnanimous. He chided Wyoming’s wildlife management for its inaction.

“We’ve been courteous to Wyoming and respectful of the argument that states don’t interfere with the way other states do business,” he said, “but when another state does things that affect the quality of life and resources that citizens in Montana value and hold dear, there comes a time when you run out of patience.”

Still, as Wyoming points out, no tests have shown that CWD has yet entered its feeding grounds.  In a response to Montana’s letter concerning CWD in its feeding grounds, Wyoming’s chief game warden Brian Nesvik spoke up for his department.

“At this point, there’s no link whatsoever between the prevalence of CWD in Montana and feedgrounds in Wyoming,” Nesvik said. “The fact of the matter is we have not discovered CWD in elk in any of our feedgrounds in western Wyoming.”

But officials fear CWD will run rampant once it does, and are looking for proactive solutions to implement.

As the encroachment of the disease closed on Montana, officials launched a “special” hunt season to target areas where CWD pervades. The new season will run Dec. 15–Feb. 15 and allow hunting for whitetail and mule deer in 1,200 square miles in districts 575, 502, 510, and 520.

But the goal isn’t eradication. Officials said they merely want to slow the spread of CWD and allow time to study its growth.

Up Next: Brompton Recalls More Than 8,000 Folding Bikes