It’s not your classic swamp buggy, but Ford says the new Bronco Everglades, making its debut at the Chicago Auto Show, is designed to take on ‘extreme adventures with confidence,’ including trips through the Florida swamplands.

The Bronco Everglades is the latest in a growing series of special editions and packages the automaker has launched since the brutish SUV came back to life last year. It follows last month’s unveiling of the new Bronco Raptor.

“Bronco customers like to explore new places, but some want to go even further off the trail than others,” said Jolanta Coffey, Bronco chief engineer.

“Everglades is specially equipped to enable these customers to tackle even more challenging terrains and trails — and with the front bumper-mounted winch, they can help others out of trouble while they’re at it.” 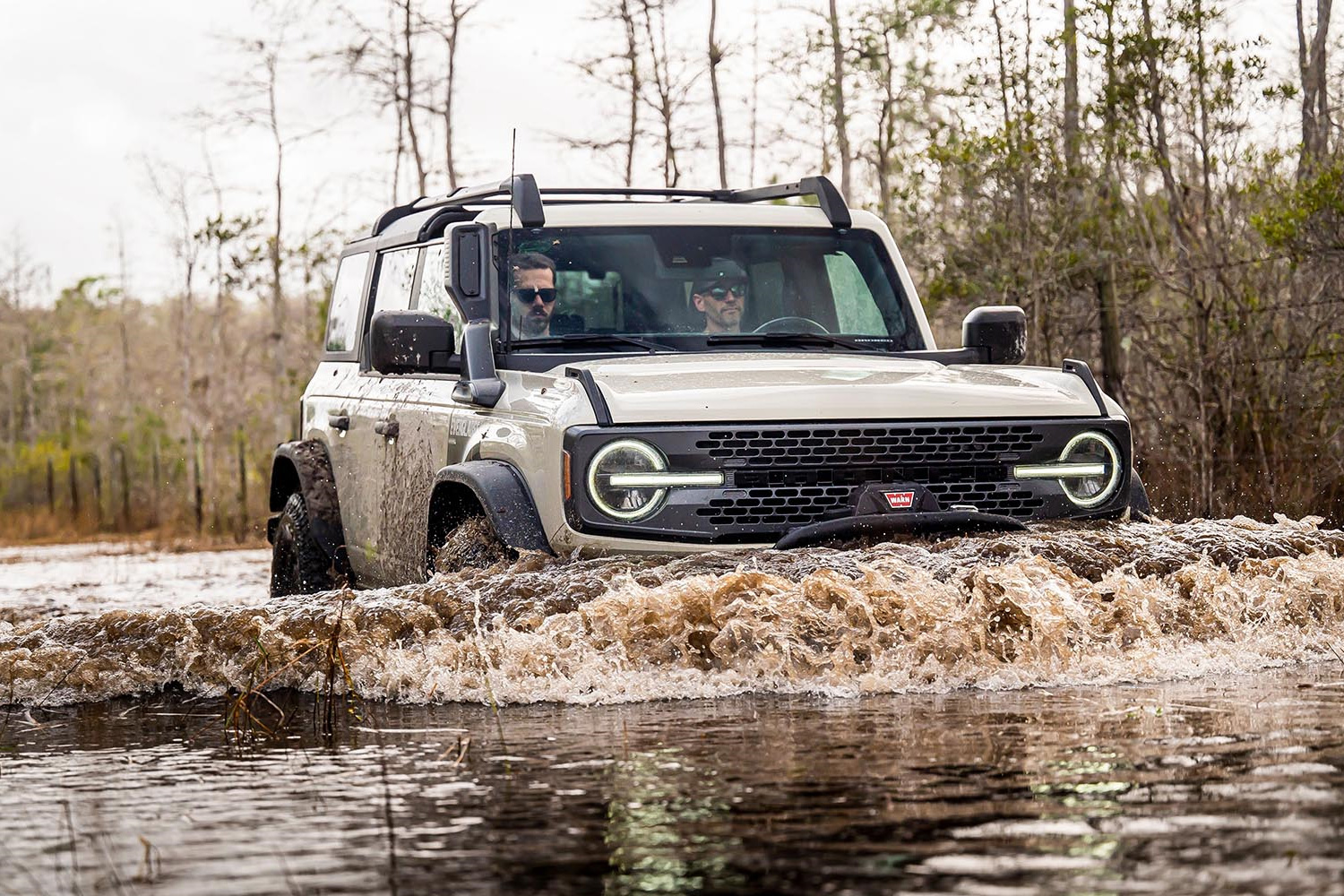 The Everglades edition adds plenty of gear to back up Ford’s claim. The most visible update is the addition of a snorkel running up the passenger-side A-pillar. Add modifications to the SUV’s front and rear axles, transfer case, and transmission, and the Everglades edition Bronco will be able to cross water up to 36.4 inches deep. 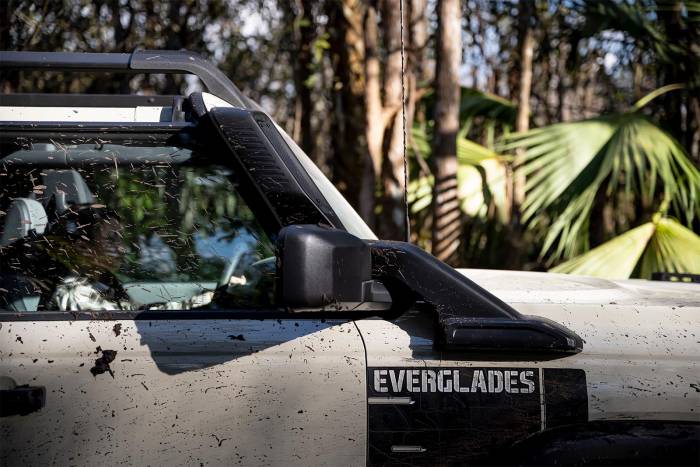 One of the benefits of the Bronco design is the ability to mix and match — or remove — parts and pieces. That permits more visual distinctions between different models. The Everglades gets squared-off wheel arches, for one thing, while borrowing the wider fender flares from the Sasquatch package. And there’s unique “topography etched into the front fenders paying homage to the Florida swamplands that inspired the new edition.” 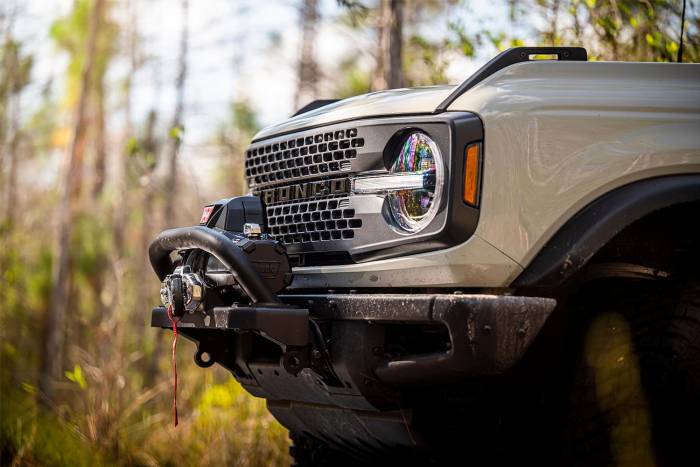 It isn’t all cosmetic, though. The Everglades’ heavy-duty modular bumper is equipped with a Zeon 10-S WARN winch. It has a 100-foot synthetic line and is rated at a 10,000-pound capacity.

Other standard features include a safari bar, rock rails, and upgraded steel bash plates — the same ones used on the top-line Bronco Black Diamond and Badlands models. The grille, meanwhile, is finished in Carbonized Gray with gloss black Bronco lettering. 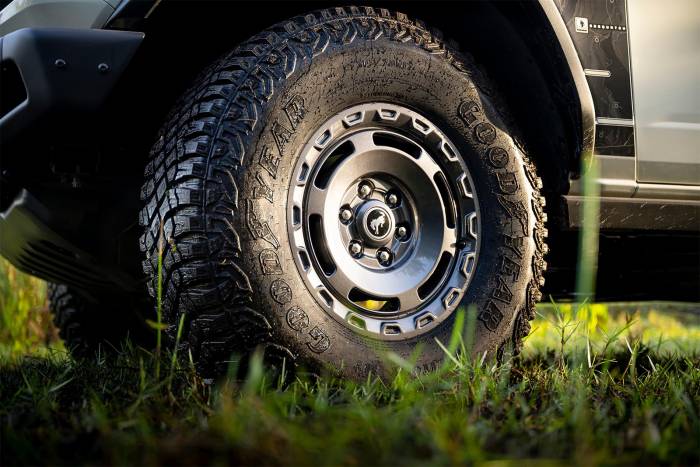 The Sasquatch Package is standard on the Bronco Everglades and adds 17-inch Carbonized Gray-painted alloy wheels shod with 35-inch Goodyear mud-terrain tires. It also adds rock rails and a hardtop with a roof rack and crossbars.

The body itself can be painted in any of five colors: Eruption Green, Area 51, Shadow Black, Cactus Gray, and, exclusive to Bronco Everglades, Desert Sand.

This truck is designed to get dirty, but it will be relatively easy to clean out with marine-grade vinyl seats and rubberized washout flooring. 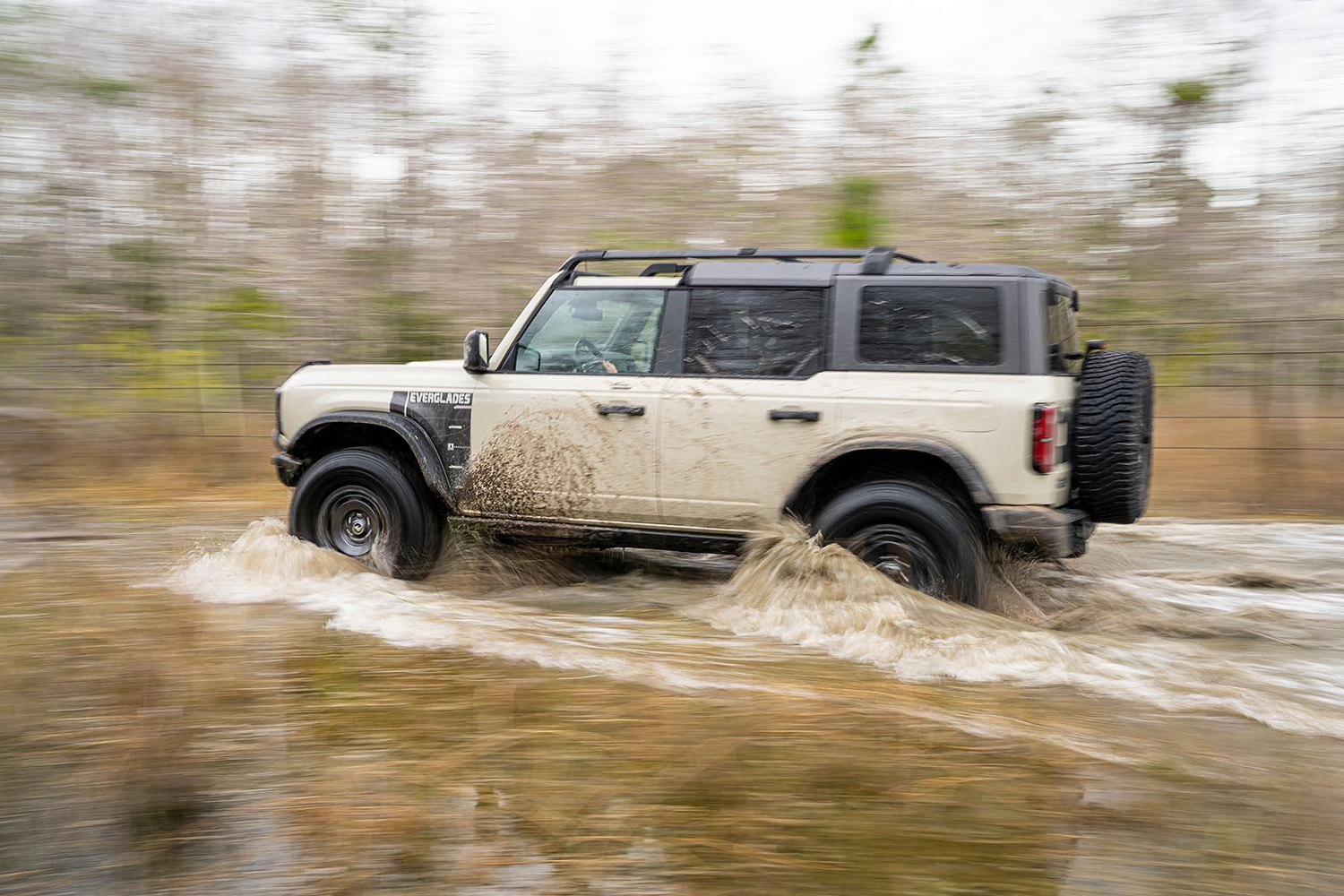 Power comes from a turbocharged 2.3L EcoBoost engine, making a solid 300 horsepower and 325 pound-feet of torque. It’s paired with a 10-speed SelectShift automatic transmission. The SUV’s 4×4 system has a two-speed transfer case with a maximum 67.8:1 crawl ratio. This will make it easy to deal with the mudflats.

Of course, the Everglades edition offers key features found in other Bronco off-roaders, starting with the G.O.A.T. mode selector. Short for “Goes-Over-Any-Terrain,” this driving mode selector allows a driver to set up for a variety of different traction conditions.

It can be optimized for mud, snow, or sand with the turn of a dial. This instantly adjusts a variety of vehicle functions, including throttle response, steering, braking, and shift points. 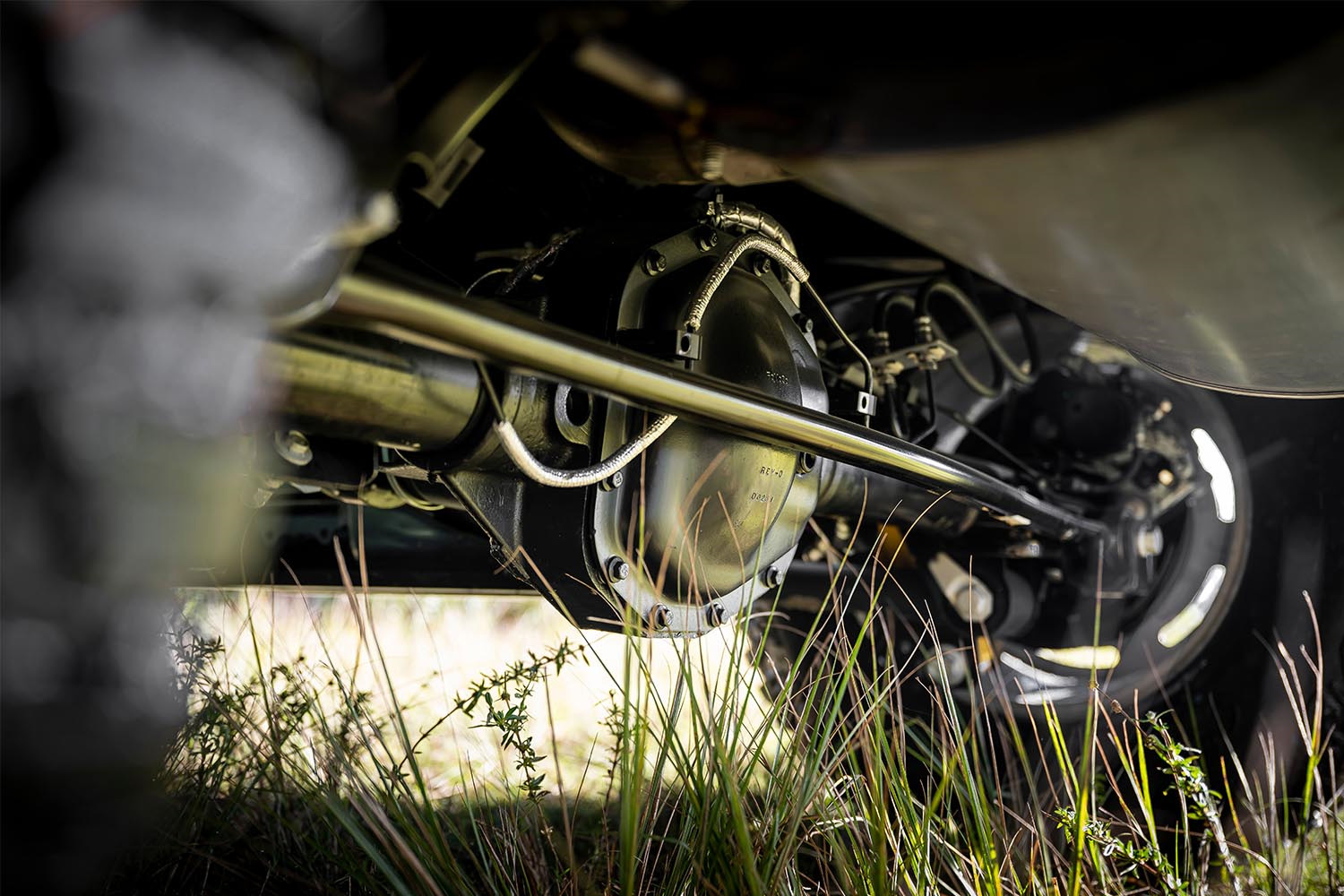 While the Everglades is officially referred to as a “mid-package,” it gets a number of tech touches. These include a 12-inch touchscreen with the Sync 4 infotainment system. And it can download software upgrades through a smartphone-style over-the-air update system. 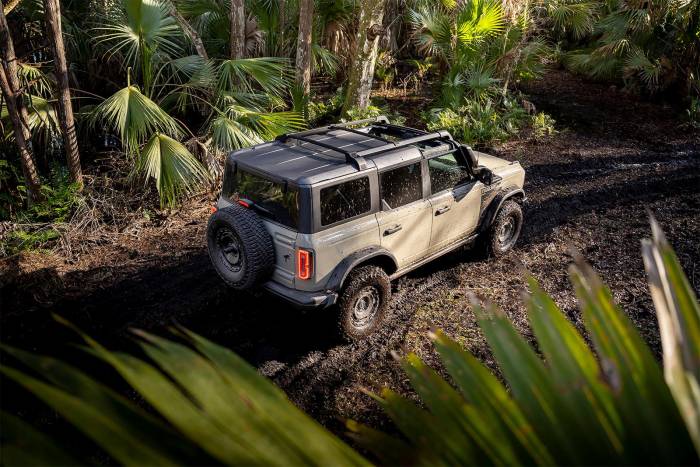 The 2022 Ford Bronco Everglades will reach showrooms this March. But be aware that it will be available “exclusively for existing Bronco reservation holders,” according to Ford.

Demand for the various Bronco models and packages has far exceeded the automaker’s expectations — and production capacity. It recently put a temporary hold on the Bronco online ordering system.

Up Next: 2022 Subaru Forester Review: Small Changes to a Big Winner