With badass off-road manners, there’s a good reason the new Ford Bronco has collected a string of awards, including North American Utility Vehicle of the Year. Ford isn’t resting on its laurels, however, and now brings us the wider, taller, and even more capable 2022 Bronco Raptor.

There’s little doubt Ford has scored big since bringing the old Bronco badge back to life. Available in both two- and four-door configurations, it won raves from critics and a reservation bank that’s going to take some time to fulfill.

But if you’ve not yet had your chance to complete your order, that actually might be a stroke of good fortune. Today, the Detroit automaker announced another member of the Bronco family: the 2022 Bronco Raptor.

And it truly pushes things to new extremes.

If the name triggers déjà vu, that’s no surprise. Ford already offers Raptor versions of both the big F-150 and midsize Ranger pickups (sadly, we don’t get the Ranger Raptor in North America).

Both deliver gobs of power and are outfitted for the demands of off-road racing, including Baja-style desert runs. If anything, the Bronco Raptor will take things a step beyond, adding even more rock-crawling capabilities than the current king-of-the-rock-pile Badlands edition.

Since relaunching Bronco, Ford has raced the SUV in seemingly every series for which it could line up a team, whether out on the Baja sands or in Ultra4 circuits like the King of Hammers.

“All of our learnings we’re baking into this product,” Bronco Brand Manager Esteban Plaza-Jennings said last week, speaking to a handful of media receiving a first look at the Bronco Raptor.

It takes only the most casual glance to recognize Raptor is more than just a new badge. Consider some of the basic numbers. The truck, which will be sold only in a four-door configuration, boasts a minimum ground clearance of 13.1 inches — 4.8 inches more than a base Bronco.

At 73.6 inches, the Bronco Raptor also measures 9.8 inches wider than the standard Bronco and has 8.6 inches of additional track width. The beast rides on standard 37-inch all-terrain tires. 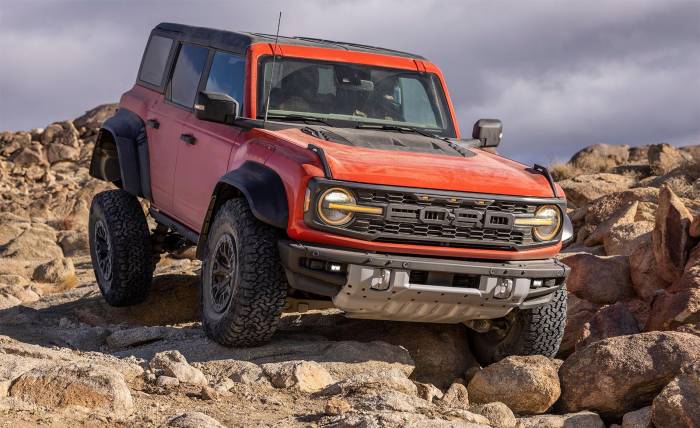 “As the most badass Bronco yet, the Bronco Raptor design is extreme,” said Paul Wraith, Bronco design chief. “It’s muscular while maintaining an underlying simplicity with performance-focused details added only for outstanding high-speed capability.”

Easy On, Easy Off 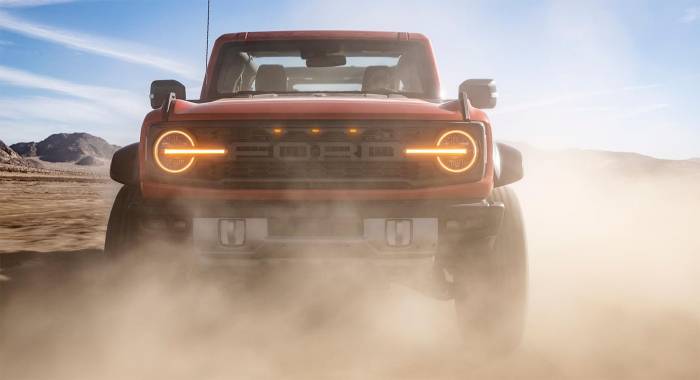 Up front, the Ford name is molded into the grille in big block letters. It’s framed by Raptor-specific headlights with amber daytime running lights. 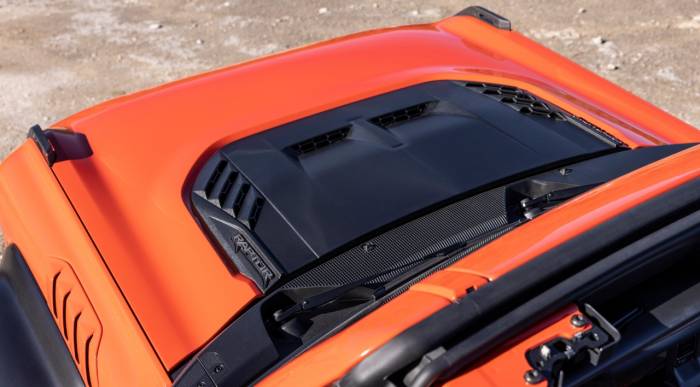 The modular steel bumper possesses unique tow hooks and removable end caps. And a hood of sheet-molding compound features functional louvers that help suck out heat when the Raptor is running at its limits.

Bold black fender flares extend out from the standard Bronco body, with removable front mud flaps designed to minimize damage to your truck (and anyone who makes the mistake of coming up too close behind).

There are a variety of add-on features, such as running boards. But Ford engineers stuck with the mantra of the broader Bronco program, giving owners the ability to easily attach or remove things like the new running boards, which quickly bolt on or off the Raptor’s reinforced rock rails. Of course, the doors can be pulled off as well.

As you’d expect, there are numerous reinforcements to help hold things together, whether racing down the Baja or jouncing across the Rubicon Trail. That includes a new aluminum skid plate up front and additional underbody protection that extends to about midway under the heavily upgraded chassis.

The fully boxed frame has undergone many revisions, starting with new shock towers that increase wheel travel and, Ford, claims, improves off-road durability. Overall, the automaker says torsional rigidity is up 50% compared to the rest of the Bronco lineup.

“Competition-level” axles have been borrowed from the Ford Bronco DR race truck. Raptor gets a semi-float Dana 50 Heavy-Duty AdvanTEK, with 235mm ring gear, while the Dana 44 AdvanTEK front-drive unit includes upgraded half-shafts with 210mm ring gear, the automaker explained in a statement.

One of the truck’s more compelling features is its High-Performance Off-Road Stability Suspension, or HOSS, system with Live Valve technology — which was developed in collaboration with Fox. Integrated sensors and remote reservoirs help adjust each corner to driver input and road conditions “hundreds of times every second.”

This truck is meant for go, not just show. It’s powered by a twin-turbo 3.0L EcoBoost engine that’s expected to punch out more than 400 horsepower once final numbers are confirmed. (Torque numbers have yet to be released.) It’s paired with a 10-speed SelectShift automatic that, in turn, pushes power out through a three-mode 4×4 system.

The upgraded transfer case not only helps handle high-speed desert conditions but allows Ford to boost Raptor’s towing capacity to 4,500 pounds, a full 1,000 pounds over the base model. 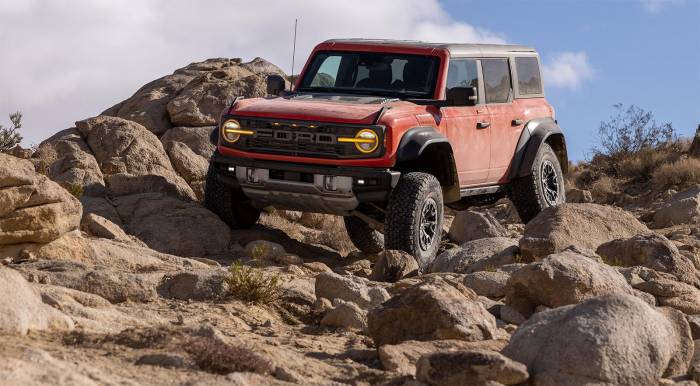 The Raptor’s cabin offers a fair degree of comfort and lots of sporty orange and carbon trim pieces. The development team recognized that owners will likely use the Raptor as a daily driver during the week, then take things to extremes on weekends and holidays. 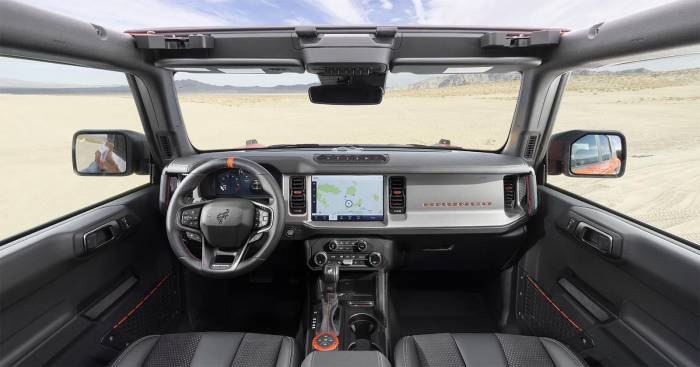 In base trim, the high-bolster seats are trimmed in marine-grade vinyl, with rubberized, washable flooring. Buyers can upgrade to neo-suede seats, with leather bolsters and carpeted flooring.

The steering wheel, meanwhile, is thicker than other Bronco models, giving drivers the added grip they might need when pushing things to extremes. Larger more aggressive paddle shifters also ensure you never miss a shift when bouncing around off-road.

Like the stock SUV, the Bronco Raptor has plenty of technology on board, including a 12-inch touchscreen featuring Ford’s latest Sync 4 infotainment system.

The digital gauge cluster is all about doing business and features several readouts specifically designed to keep the driver up on what the truck is doing at all times. Buyers can add features like a 360-degree camera system and a 10-speaker B&O audio system.

Of course, there are all the tech features found in more plebian versions of the Bronco, such as the GOAT Mode selector that allows a driver to set up for driving on a variety of road conditions.

With a single touch, that will switch transmission, steering, throttle, and other settings for mud-and-ruts, for example, rock crawling or sand racing. Other features carried over from the mainstream Bronco line include Trail Control, Trail Turn Assist, and Trail One-Pedal Driving. 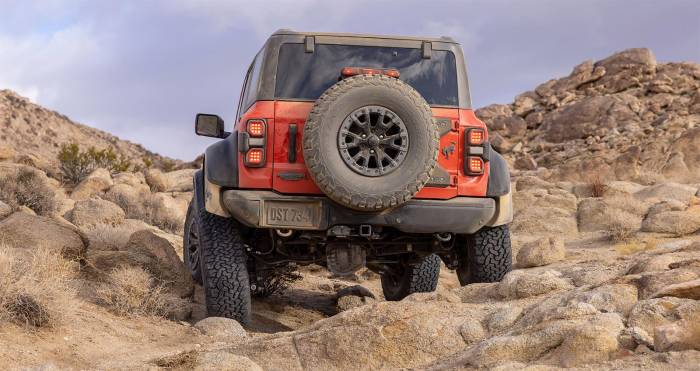 Ford plans to begin taking orders for the new Bronco Raptor in March, with initial deliveries starting over the summer. The automaker cautions that many 2022 Bronco Raptors will go to reservation-holders already in line for a 2022 Bronco, who will get notifications of first dibs later this month

So get in line very early or you could be in for a very long wait, like many early Bronco customers who still haven’t seen their vehicles.

Up Next: Talking Tires: Differences Between All-Season, All-Weather, Snow, and All-Terrain Rubber