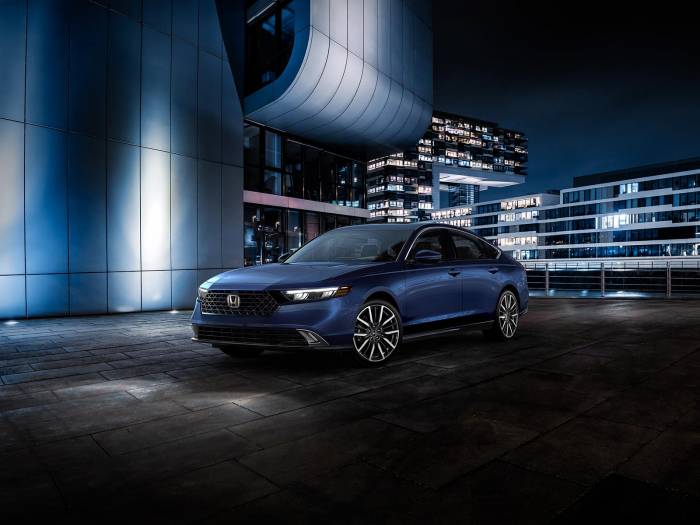 It’s a tough time to be selling sedans but, unlike some competitors, Honda isn’t calling it quits. It’s actually doing a complete makeover of the iconic Accord model for 2023.

The 11th-generation sedan not only grows bigger but gets new technology, including a Google-powered infotainment system and a new hybrid powertrain.

If bigger is better, the 2023 Honda Accord has at least one thing going for it. The 11th-generation sedan stretched by nearly 3 inches and gained about 6% more interior space. But the Japanese automaker is betting the new model has a lot more going for it in a bid to keep loyal owners from defecting to SUVs and CUVs.

There’s plenty of new technology onboard, whether you’re talking about infotainment, safety, or powertrain systems. Among other things, the top-line Accord Touring model will be the first Honda to go with Google-powered maps and apps running on a 12.3-inch touchscreen — the largest the automaker has ever offered. That should help attract young tech-minded buyers, Honda is betting.

But equally significant is the introduction of a fourth-generation hybrid propulsion system. With added power and performance, the automaker sees it becoming a popular option at a time when gas prices remain stubbornly high.

“The all-new 11th-generation Accord is essential to our lineup as a critical driver of brand loyalty, and with hybrid models representing 50% of sales, a key part of Honda’s electrification strategy,” said Mamadou Diallo, American Honda’s vice president of Auto Sales. “This is our best Accord ever, a true benchmark in its class, offering an unbeatable combination of style, efficiency, performance, and connectivity.”

The 2023 Honda Accord rides on an updated version of the platform underpinning the prior-generation sedan. And it adds another 2.8 inches in overall length, at 195.7 inches. The rear track also has been widened by 0.4 inches.

While the roofline adopts more of a fastback shape, the nose of the 2023 Accord is a bit more brutal with an upright grille and new LED headlamps. With crisp character lines and better-defined shoulders, it adopts a more sophisticated appearance, on the whole.

The cabin has a clean and simple appearance, albeit with more upscale trim and appointments. Individual models add unique touches, such as the leather-wrapped steering wheel and shifter knob on the Sport package, which also gets aluminum pedals.

All 2023 models adopt digital instrumentation. Base versions of the next-gen Accord feature 7-inch touchscreens, with the 12.3-inch display on high trim.

And the Touring model migrates to a Google-powered infotainment system that includes Google Maps and apps, as well as the Google Assistant voice controller. The Accord Touring also comes standard with a 6-inch head-up display and a 12-speaker Bose audio system.

The new model has an extensively redesigned electrical architecture and, in turn, virtually all onboard software can be replaced or upgraded using smartphone-like over-the-air updates.

A number of new safety features are also added or upgraded for 2023, starting with the standard Honda Sensing suite of advanced driver assistance systems. New radar sensors and a wider-view camera are intended to further reduce the risk of collision. In the event of a crash, the new Accord adds front knee airbags and rear side-impact bags.

Two new powertrain packages are introduced with the 2023 Honda Accord. The base offering is a turbocharged 1.5L inline-four making 192 horsepower. It’s paired with a continuously variable transmission (CVT).

But Honda expects a sizable number of buyers to migrate to the fourth-generation hybrid system. The gas-electric option pairs two side-by-side motors and a 2.0L gas engine to punch out 204 horsepower and 247 pound-feet of torque — an additional 15 pound-feet for the 2023 model.

Both the turbo-four and hybrid powertrains have a CVT that is programmed to deliver step-gear-style “shifts.”

The debut of the 2023 Honda Accord comes just days after the automaker marked the 40th anniversary of its first U.S. automotive assembly plant. That facility in Marysville, Ohio, started out with an early version of the Accord, and the latest-generation sedan will continue to be produced there.

Honda Is Committed to Passenger Cars

Honda has yet to release complete specs on the 2023 Accord, including fuel economy numbers and pricing. The current model starts at $27,615 including delivery fees. While automakers have raised prices significantly over the last several years, Honda may try to hold back on the new sedan, according to several analysts, to try to win back loyal buyers.

Honda remains committed to the passenger car segment, even as rivals like Ford either halt production of sedans and coupes or scale back their product lines. The automaker is hoping to get a bigger share of a smaller market with the 2023 Accord. 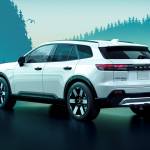 Honda is finally jumping into the battery-electric SUV category through a partnership with GM. The Prologue will be the first in its full EV lineup. Read more…