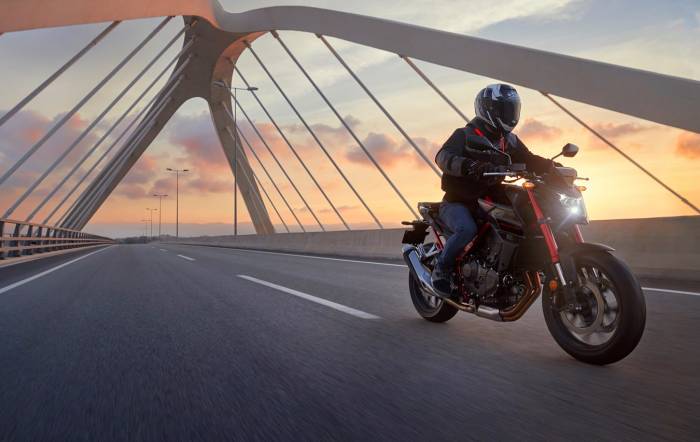 The global launch of the 2023 Honda CB750 Hornet during the International Trade Fair Intermot has us hopeful, but not holding our breath for a speedy North American debut.

Recently, Honda has been teasing the market with concept sketches and engine specs for the new CB750 Hornet. This led to a climactic unveiling of the naked bike in Germany this week.

The Hornet moniker appeared with the 1998 introduction of the Honda CB600F, powered with a detuned version of the inline-four engine of the CBR600 sport bike. In the USA and Canada, Honda named it the 599, as the Hornet name was already trademarked by AMC Chrysler. After four revisions over time, Honda discontinued the fifth-generation CB600F Hornet in 2013.

Ten years after disappearing from its catalog, Honda has now resurrected the Hornet lineage with the current 2023 CB750 Hornet.

Conforming with the current trend in the middleweight naked market segment, a 750cc parallel twin with a 270-degree crank has taken the place of the 600cc inline-four from a decade ago. With this engine configuration, the CB750 Hornet targets the popular Yamaha MT-07 — a global bestseller since its 2014 introduction.

Designed at Honda’s R&D facility in Italy, the CB750 Hornet’s sleek shape recalls past Hornet models while adhering to current streetfighter trends. The shape of a hornet’s wing guided the fuel tank’s form.

With its aggressive styling and edgy lines reminiscent of the KTM Duke, Yamaha MT-07, and Kawasaki Z650, the new Hornet’s sharp design aims to appeal to fans of the middleweight naked streetfighter class.

Owners can customize or upgrade their Hornet — offered in four colors — with a range of accessories from the dedicated Sport, Style, and Touring parts catalogs. The white and black color editions come with a striking red frame and front forks, making the bikes stand out in a crowd.

Peak torque is 55.3 pound-feet at 7,250 rpm. The cylinders are borrowed from the durable nickel-silicon carbide coating from the CBR1000RR-R, enabling sharper throttle response and pickup.

This particular engine configuration delivers the “exhilarating top-end rush.” The concept is from the R&D engineers, who sought to combine the strong low-down torque and midrange grunt needed for strong corner-exit acceleration. The 270-degree crank with an uneven firing order creates a V-twin-like pulse, enhanced by a bespoke exhaust creating a unique sound.

The drivetrain transmits the power via a six-speed gearbox and a wet multi-plate clutch with assist-and-slipper function. The primary drive gear also acts as the balancer shaft to reduce weight.

A fourth User mode allows the rider to customize and set their own preferences. The claimed top speed is 127 mph while claimed fuel consumption is 54 mpg.

Weighing in at 419 pounds with the 4-gallon tank full, the CB750 Hornet is 26 pounds lighter than the CB650F. Honda claims a class-leading power-to-weight ratio of 2.81 kg/kW.

A Showa 41mm SFF-BP inverted fork offers 5.1 inches of travel at the front and the Pro-Link monoshock provides 5.9 inches of travel for the rear wheel. Stopping power is supplied by dual 296mm front discs with Nissin radial-mounted four-piston calipers and a 240mm rear rotor with a single-piston caliper. A two-channel ABS is standard.

Honda has not made any announcements as to if and when the 2023 CB750 Hornet will be available in the U.S. market. Given that the Hornet’s engine/drivetrain platform will also power the long-awaited new Transalp, we expect Honda to bring both these models to the North American market in time. Pricing is not known at this time. 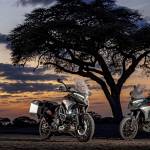