After being continually denied the mighty GR Yaris, this might feel like an April Fools’ joke. But we assure you that the 2023 Toyota GR Corolla Hatchback will actually be coming to the North American market later this year.

If you think of a Corolla as little more than basic transportation, you could be in for a real shock with the debut of the race- and rally-ready 2023 Toyota GR Corolla hatchback. Its sporty styling, six-speed manual gearbox, 300-horsepower engine, and all-wheel drive should be smile-inducing for anyone who loves to drive.

The compact five-door is the latest in a growing series of Toyota models developed by the Japanese automaker’s Gazoo Racing division. It’s part of a push by Toyota President Akio Toyoda to inject the brand with more “passion.” And it’s certain to take traditional Corolla fans by surprise considering it delivers a roughly 50% increase in horsepower and will be the first version of the familiar compact nameplate tuned for the track.

Is this the practical everyday car that will keep us smiling every time we slide in behind the wheel and rev the engine? One part Toyota reliability, two parts practicality, and four parts driving passion add up to one GR Corolla Hatchback. 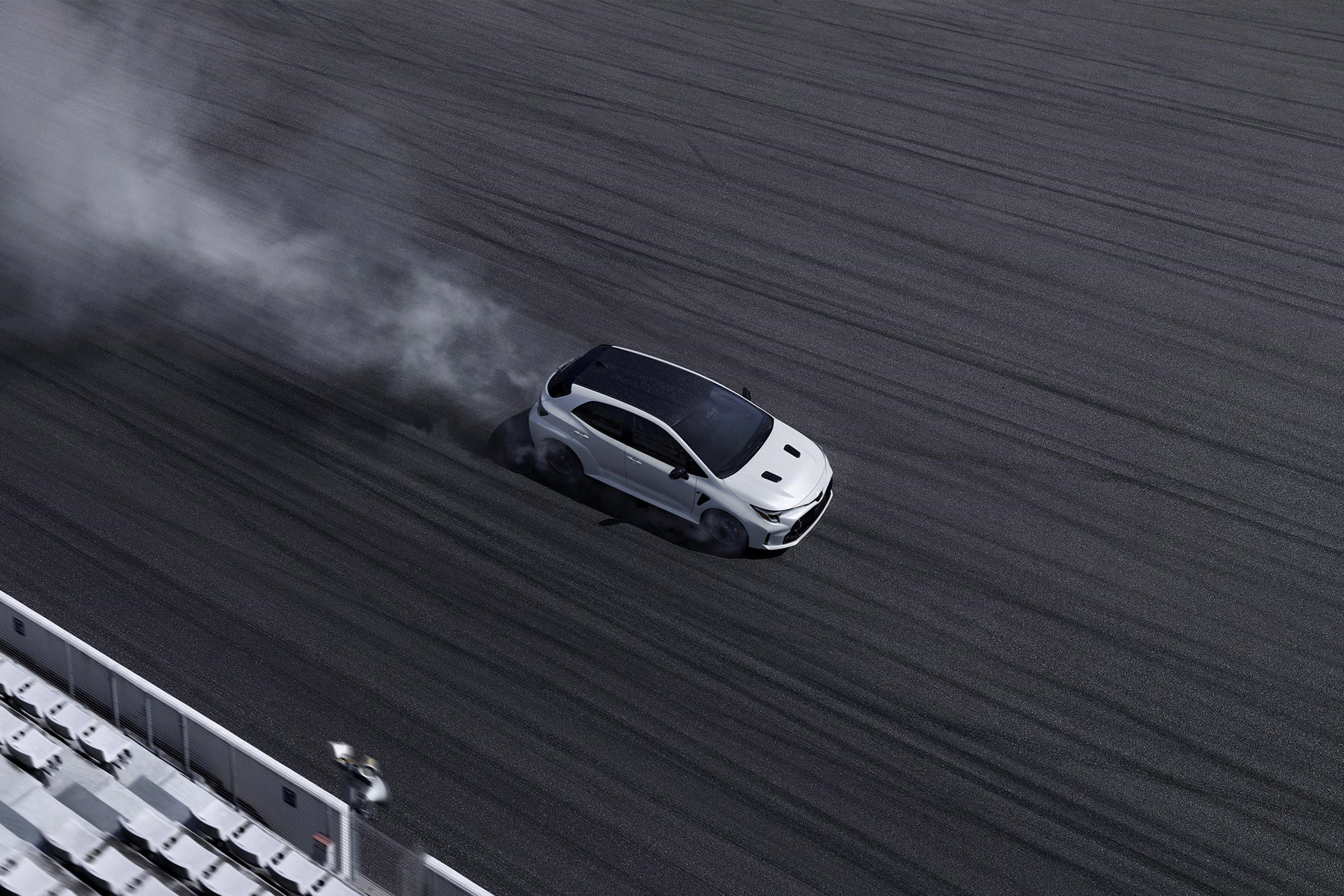 A much-needed boost of the GR model comes at a critical time. Sales of sedans, coupes, and hatchbacks have been on a sharp decline. Some competitors are even pulling out of the passenger car segment entirely. Toyota last year launched a CUV-style Corolla Cross model, but the brand is determined to hang on with the Corolla sedan and hatch models as well.

While it’s expected to generate relatively modest sales, the GR model promises to put a halo around the Corolla badge – and give Toyota a direct challenger to the likes of the Honda Civic Type R and Subaru WRX.

The new model is the work of the Gazoo Racing team that the automaker’s president personally authorized nearly two decades ago. It has beefed up a variety of models since then, notably Toyota’s two sportscars, the little GR86 and bigger Supra. Now, Gazoo is pushing more mainstream.

It starts out as a Corolla hatchback. But the body and chassis undergo several changes designed to improve performance and handling. The GR Corolla used a MacPherson strut-style suspension up front and a rear multi-link double-wishbone design.

The emphasis is on functionality, starting with the use of lighter-weight materials wherever possible. That includes aluminum for the hood and front door panels. Toyota also gave the limited-Run GR Corolla Circuit Edition a forged carbon sheet molding compound roof.

The exterior is slightly wider than a stock Corolla hatchback and gets some updates that emphasize aerodynamics and both engine and brake cooling. That starts with a functional matrix grille and extends to the air curtains that reduce turbulence around the front wheels. A flat underbody and rear bumper ducts help reduce drag while also providing more downforce to keep the track-ready five-door stable at high speeds.

The heart of this beast is, of course, its drivetrain. And it’s definitely not a package you might have expected inside a Corolla. There’s a 1.6L three-cylinder engine, for one thing, getting plenty of assistance from a single-scroll ball-bearing turbo. It delivers a solid 300 horsepower and 273 pound-feet of torque.

By comparison, 2022 model year versions of the Corolla deliver between 139 and 169 horsepower. For another comparison, the Honda Civic Type R makes 306 horsepower and 295 pound-feet of torque.

While we might chuckle about how ridiculous the GR Corolla’s triple exhaust looks, chief engineer Yuji Sakamoto notes that it helped to maximize horsepower by reducing exhaust back pressure on the engine.

The GR Corolla is the first in years to deliver a six-speed manual. (There’s no automatic option, in fact.) It’s a short-throw design with rev-matching. Power is then directed into Gazoo’s custom-designed GR-Four All-Wheel-Drive system. Drivers will have the ability to choose between three different torque split settings.

For everyday driving, it recommends the setting that delivers 60% of power to the front wheels, 40% to the back. The 50:50 setting targets “competitive track driving,” while the 30:70 option is designed “for a fun-to-drive quality on winding roads and circuits,” the automaker explains.

Inside, the GR Corolla gets new sports seats with the Core model, the Circuit Edition upgraded to leather, and suede six-way power seats for the driver and four-way for the front passenger. The limited-run model also has a shift knob signed by “Morizo.” That’s the pseudonym Toyota CEO Akio Toyoda used when he joined the Gazoo Racing driver’s team for the 2007 Le Mans endurance race.

Next to that shifter is a proper handbrake, something not on offer in many new cars today. Handbrakes are great tools to initiate dramatic changes in direction, like when you might want to toast some tires during a smokey drift.

Both versions of the hatchback have a 12.3-inch digital gauge cluster with unique readouts showing things like turbo pressure and all-wheel-drive mode. The GR Corolla retains plenty of other tech features, including cloud-based navigation, an onboard Wi-Fi hotspot, and Toyota’s newest voice assistant-based infotainment system.

Add to that Toyota Safety Sense 3.0, the latest version of its suite of advanced driver assistance systems. That includes active cruise control as well as a forward crash avoidance technology with pedestrian detection.

The 2023 Corolla GR should be a hoot on a racetrack. But when it comes down to brass tacks, it’s a street car that will be all kinds of fun in all but a few scenarios: stop-and-go traffic, long road trips, and obviously anything off road. It also comes with a one-year membership in the National Auto Sports Association (NASA) for those times when you do want to take it to the track.

We also got word from Mike Tripp, Toyota Marketing VP, that in 2023 a single-model GR Cup race series will launch.

Toyota isn’t ready to release pricing just yet, but Toyota Marketing VP Mike Trippuntil did say “MSRP will be announced soon,” even though the 2023 GR Corolla’s on-sale date isn’t until late this year.

We know that the current model runs anywhere from $20,075 to $28,360. Expect a steep premium for the new track- and rally-ready model – and the Honda Civic Type R might offer a hint of what to expect, that hot hatch starting at $37,895.