We spent a day at the track experiencing all Corvette has to offer. While there are four models in the new lineup, the ultimate Corvette is the C7 ZR1 — without a doubt. Insane performance and impressive controllability are standout features of this amazing machine. 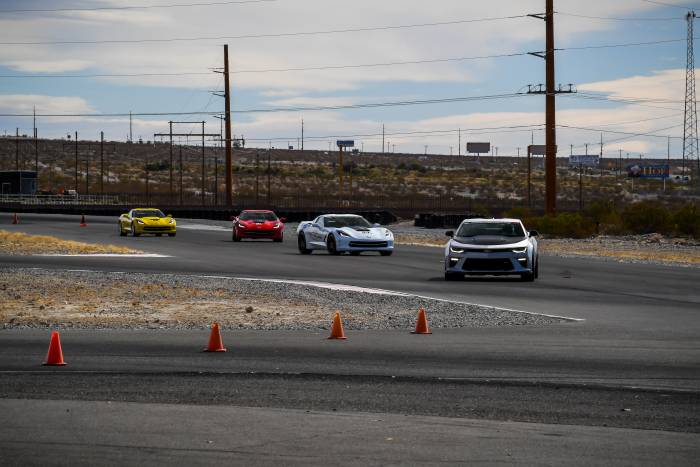 When Chevrolet invited me to a private racetrack to play with the latest Corvettes, it would’ve been rude to say no. I knew the new Corvette ZR1 is absolutely mental on paper, so I was itching to get behind the wheel of that monster! 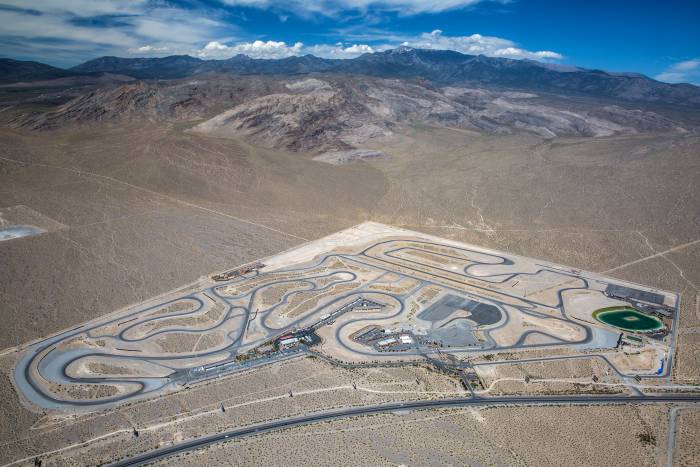 About 15 journalists and Chevrolet employees gathered at a private racetrack about an hour outside Las Vegas. The track is called Spring Mountain Motor Resort and is basically a country club for petrol heads. It’s a massive facility that offers up 6.1 miles of paved track over 332 acres of Nevada desert. In early 2019, the resort plans to break ground on a big track expansion, which should make it the longest track in the world.

The facility hosts the Ron Fellows Performance Driving School, the official driving school of Corvette. The track also hosts the Cadillac V-Performance Academy, Radical Racing School, and so much more.

Members get 16-plus days per month of open track time and 10 member races per year. There are skid pads, mini ovals, and a whole host of other performance driving training tools on site. There are rumors that a go-kart track, off-road driving course, and even a drag strip are in the works.

The onsite clubhouse has a great bar and restaurant, and the onsite lake has a seasonal tiki bar. Activities are readily available at Spring Mountain; SUP, racquetball, indoor shooting, jetpacking, and more are available onsite. Lodging is either at a nearby hotel, in a private home on the track, or at on-track condos. We were lucky enough to wake up overlooking the track from the condos. 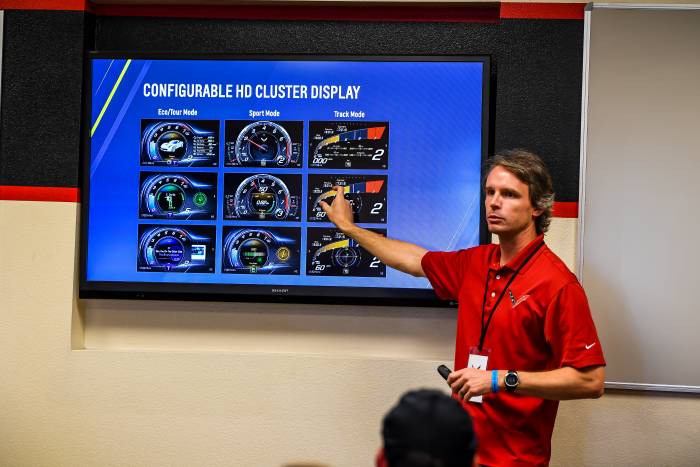 There was a wide range of performance driving experience within our group. Some had never been on a track before, while others had driven over 200 mph in purpose-built racecars. The driving instructors handled the variety of skill levels well but taught everyone the basics. We got lots of info about the cars, about the track and some personalized instruction to up our performance driving skills.

The day started with an oval driving exercise in the Corvette Grand Sport. We then moved on to a slalom exercise in the Corvette Stingray before hopping back in the Grand Sport for a barrel racing exercise. These drills then lead to on-track lead-follow laps, where two to three student cars follow an instructor car around the track. The instructor shows you the lines and talks over an in-car radio, critiquing your lines in his rearview mirrors.

We got a few sessions in the Corvette ZO6 on the track before strapping into the Corvette ZR1. After we demonstrated our relatively pathetic track driving skills, the day ended with hot laps as a passenger in the ZR1. The instructors drove the cars at maybe 80-percent capacity, which was still plenty to demonstrate the absolute insane performance of these cars and scare most of the journalists.

A highlight of the day for me was a barrel racing competition. It’s just like you see on TV at rodeos with horses running around a cloverleaf-shaped barrel layout. In this case, we were driving a Corvette Grand Sport and racing around cones. It’s a really challenging exercise and super fun to work on. Somehow, I even managed to come out on top of the fifteen-person competition.

There are four iterations of the current generation C7 Corvette. Let’s dive a little into what each of these vehicles is all about. 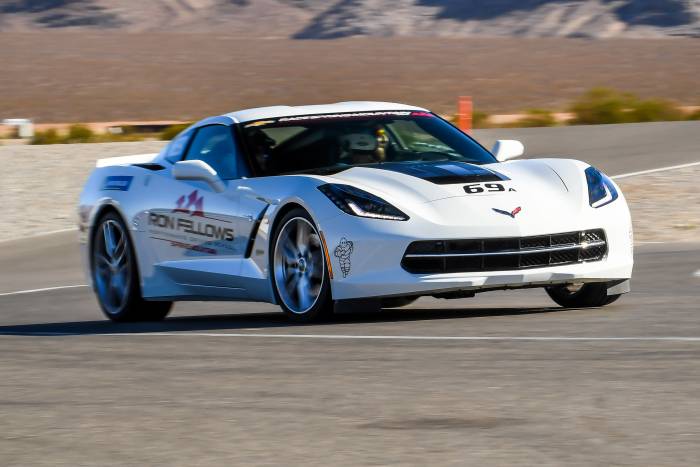 The Stingray is the base Corvette. It’s fast, comfortable, and gets impressive fuel economy, with over 20 mpg on average. If you’ve ever been in a previous-generation Corvette you’ll quickly realize that the fit, finish, and ergonomics of the Stingray are light-years ahead of the old models. 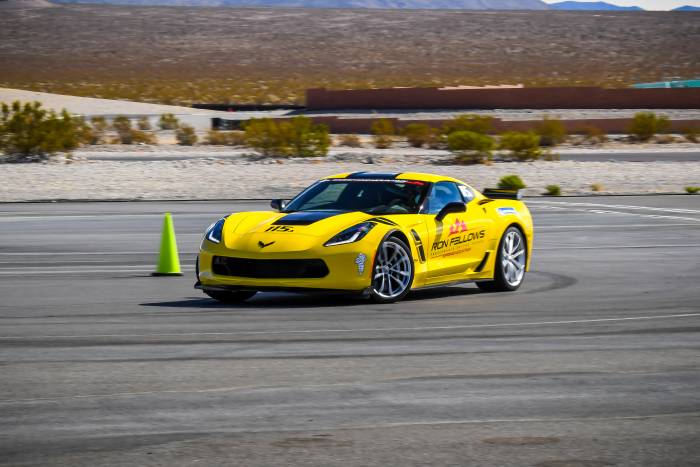 The Grand Sport offers up the same basic (but still impressive) performance of the Stingray, but in an aggressive-looking wide body borrowed from the ZO6. It’s quite possibly the best value in the Corvette lineup, with prices starting at $65,495. 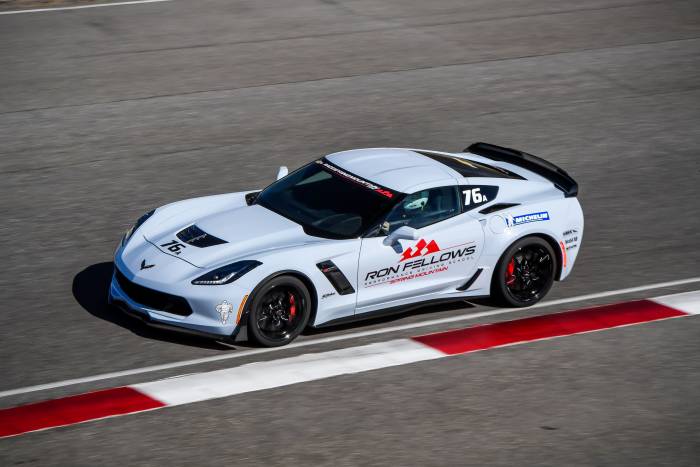 The ZO6 was the top performance machine in the Chevrolet lineup until the ZR1 hit the market. Think of the ZO6 as an angry, aggressive streetcar that’s quite fast on the track with an experienced pilot at the wheel. This car likes to chirp tires and drifts easily. In track mode, it feels like it’s always ready to bite you if you get into the throttle too quickly. If you like a playful car, the ZO6 will continuously plaster a smile across your face. 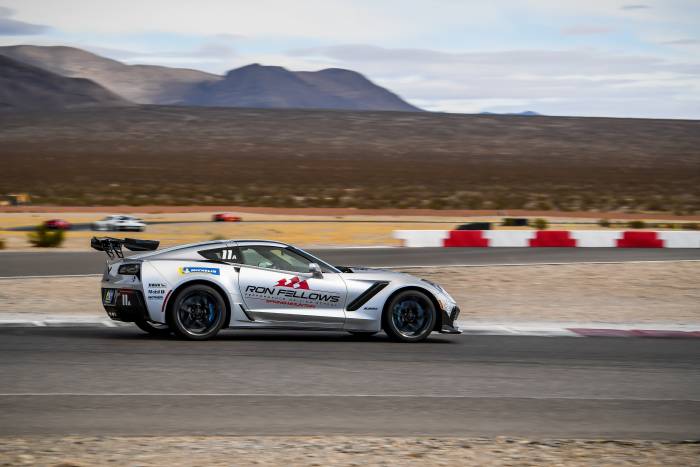 The ZR1 just came out in March of this year. With a top speed of 212 mph, it’s the fastest production Corvette ever made. It has a super-aggressive look with its huge, bulging hood — and even more so with the optional carbon front splitter and giant carbon wing. The bulging hood is necessary, as there is a massive Eaton Supercharger on the top of the big V8.

You can get the ZR1 with a seven-speed manual or eight-speed paddle shift transmission. The manual is crisp and fun to drive. The paddle shift gearbox is lightning quick and more enjoyable than you might expect. The ZR1 also comes standard with massive Brembo carbon-ceramic brakes. The braking zone G’s you can pull when you stomp on the brake pedal must be experienced to be believed. 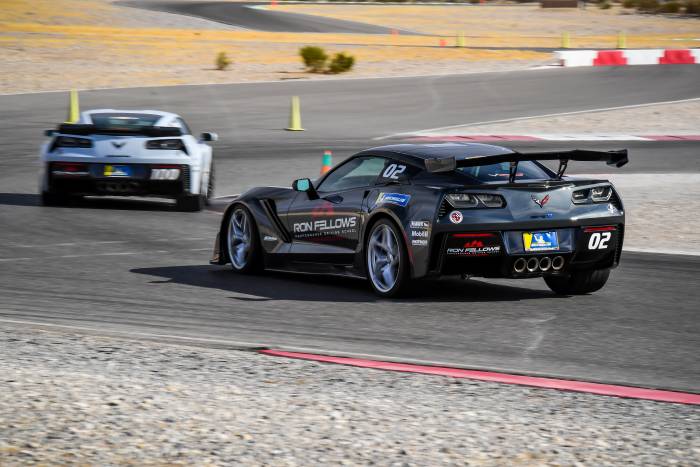 You’d think that the ZR1 would be even more aggressive than the ZO6 with its insane horsepower and torque numbers, but the engineers have tuned the car to be extremely controllable. It feels like a really fast Grand Sport. I was considerably more comfortable in the ZR1 at high speed on the track — and I got comfortable quickly. The horsepower is immediate and linear.

Get Behind the Wheel Yourself

The Ron Fellows Performance Driving School offers a wide range of on-track driving experiences behind the wheel of the Corvette of your choice. These classes are a great value but don’t come cheap. If you buy a new Corvette, Chevrolet actually pitches in, and you can get a full two-day program for $1,000. If you buy a ZR1, Chevrolet pays the full tuition for the two-day ZR1 Owners School.

Sadly, no matter how much I squeezed the engineers and PR people at Chevrolet, I couldn’t get anything more out of them about the next-generation Corvette. My guess is that the brand will reveal it at one of the big auto shows this winter, and we already know it will be the first mid-engine Corvette.

The 2018 C7 ZR1 will probably be the most bonkers front-engine Corvette ever produced. With the mid-engine C8 coming sometime next year, we can only expect good things. It’s hard for me to imagine a mid-engine ZR1 model Corvette, but I’d gladly get behind the wheel of one and tell you all about it!

Up Next: Welcome to the Insane World of Off-Road ‘Ultra4 Racing’

Saving…
Welcome to the Insane World of Off-Road ‘Ultra4 Racing’
2019 Ford Ranger Easter Eggs: Can You Spot the Monsters?
×