Bolt It On is one of the best ways to secure your motorcycle or bike inside your vehicle.

Tying down motorcycles and bicycles in vans, toy-haulers, and enclosed trailers usually means creative threading of bikes, handlebars, and tie-down straps. Then heaps of blind faith that it all stays put as you travel to your destination.

Both pedal-powered and motorized bikes grow increasingly expensive. So do vehicles, RVs, and trailers. If a motorcycle works itself loose, costly damage can ensue, taking some of the fun out of the excursion. 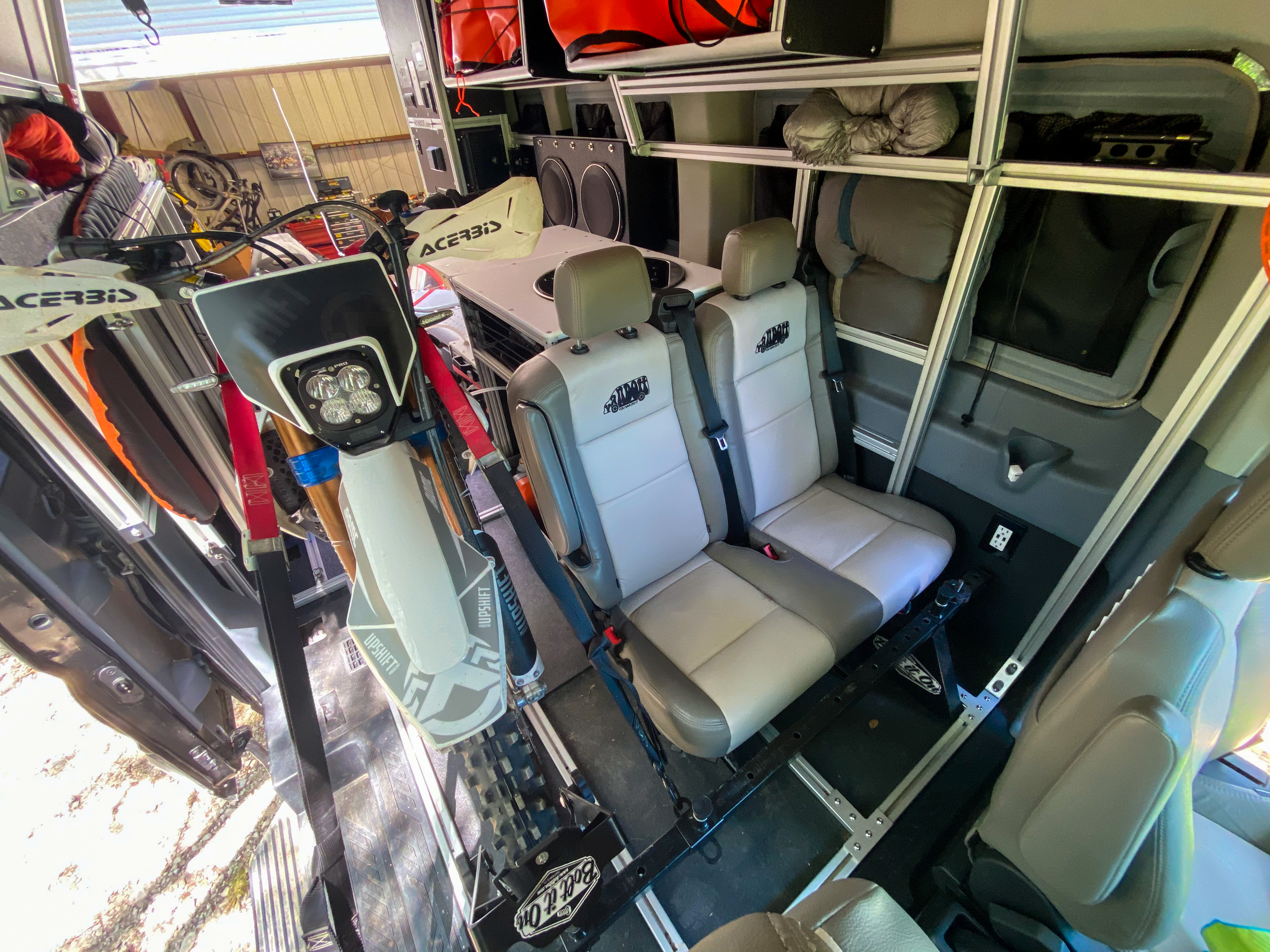 The Bolt It On restraint is an incredibly heavy-duty motorcycle and bicycle lashing system. The American-made system holds heavy adventure motorcycles without a maze of tie-down straps. In our testing, it kept everything secure. The modular design of the components allowed 5-minute installation and removal as well as reconfiguration to fit different needs or vehicles.

The downside is the cost, with a single bike system starting at $330. But the Bolt It On will last a lifetime. 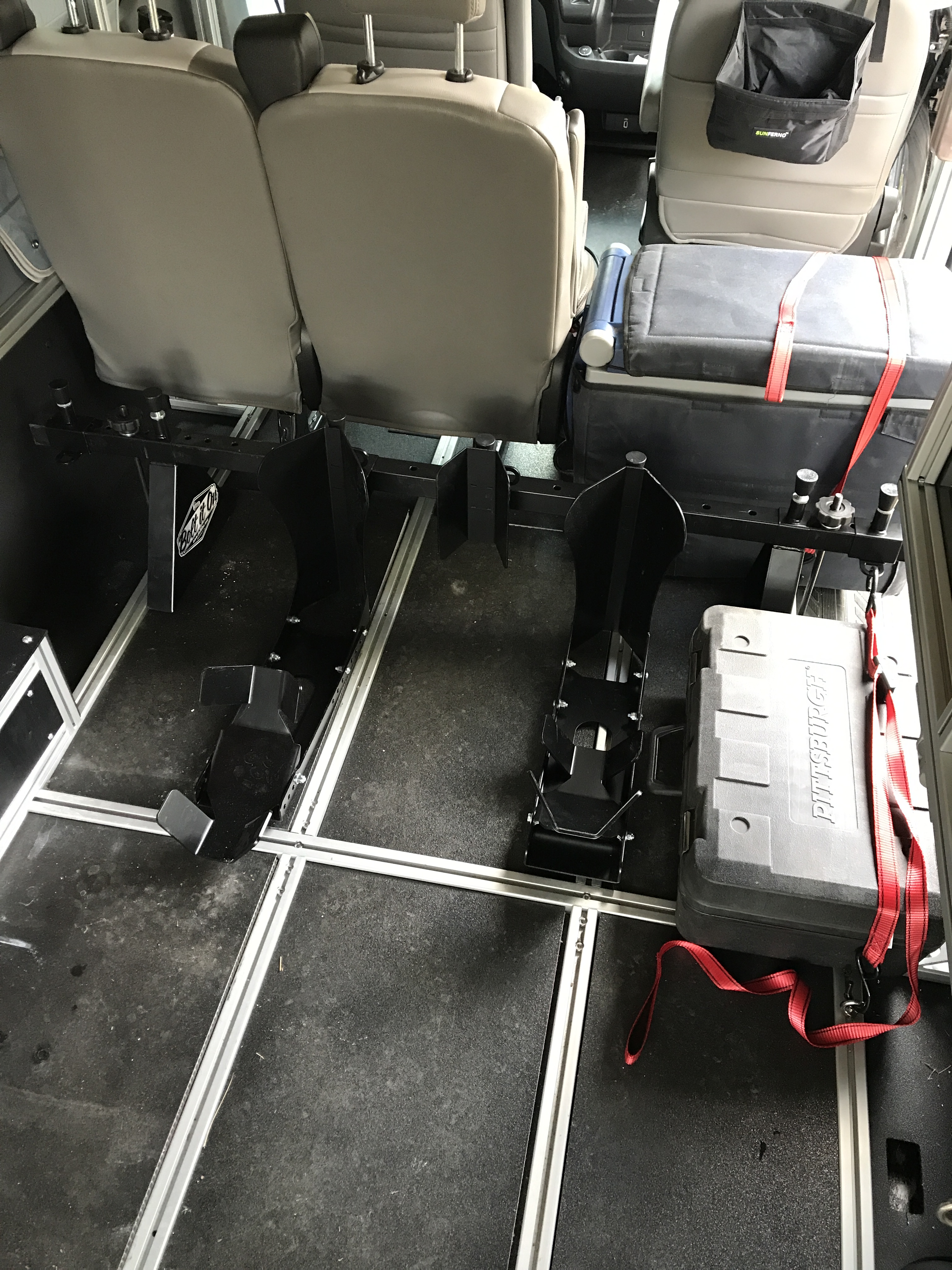 The standout characteristic of the Bolt It On system is how robust each component is. The brand makes everything out of laser-cut, high-grade-alloy steel and applies a durable black powder coat. All welds are consistent, and every part, even the smallest ones, has a heavy-duty, industrial feel.

The backbone of the system is 1¾-inch square tube crossbar and a pair of triangular legs. The crossbar has holes along its entire length, and all components secure through any hole by a spring-loaded pin.

The crossbar and anything else attached to it secures to the floor of the vehicle by heavy-duty threaded J-hooks. These attach with hand knobs that engage with factory D-rings in the floor or the factory seat anchors in passenger vans. Nothing is complicated and requires no drilling.

All this robust componentry does mean weight. A two-bike system with standard motorcycle chocks weighs 35 pounds. Bolt It On also offers roll-on chocks, which allow hands-free operation once the bike is in the chock. That brings a two-bike system to 55 pounds.

Bolt It On offers all styles of wheel chocks, including angled models and double-sided versions. The brand will cut crossbars to any length. It sells pre-configured systems, but any combination of crossbar length and wheel chocks is possible.

Another focal point of the Bolt It On system is modularity. Not only is installation and removal a tool-free, 5-minute affair, but you can also change the configuration just as quickly to accommodate different vehicles, space requirements, or gear needs. 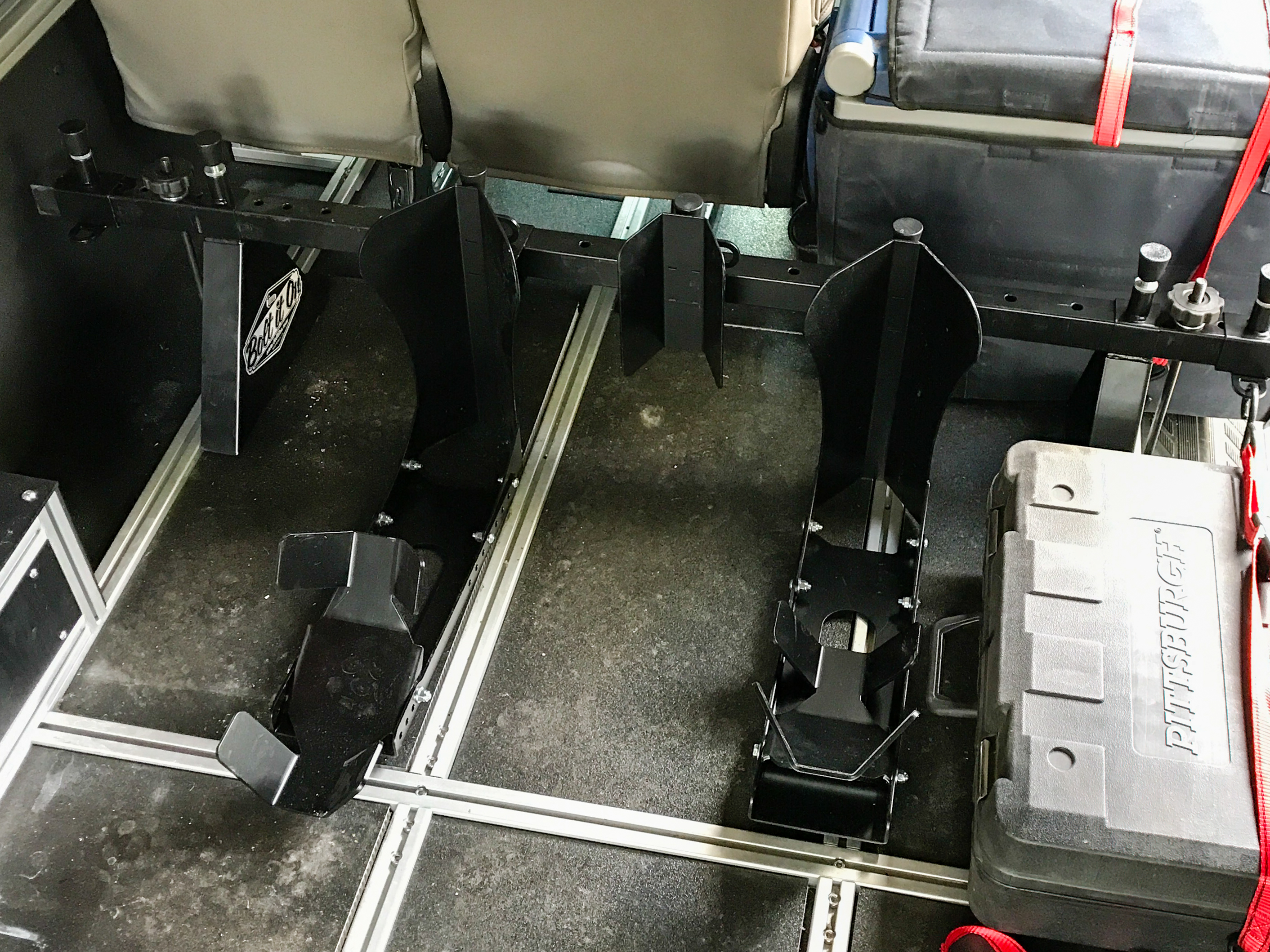 Chock styles can be rearranged, added, or eliminated. The J-hook locations, tie-down strap anchors, and the legs can also move for any reason.

The system I chose for my VanDOit DO model adventure van (a Ford Transit passenger van):

The entire system was anchored to the VanDOit internal skeleton via the two J-hooks, but it can also be attached to the factory passenger seat anchors. Once I set component locations, installation or removal took less than 5 minutes.

The listed setup allowed me to carry any combination of two dirt bikes or adventure bikes, or any motorcycle plus my mountain bike. But either passenger seats or my kitchen pod had to be removed.

I also reconfigured the system in various ways to meet particular demands or to keep as many options open as possible. The most flexible system for only one dirt bike or bicycle was to run the bicycle/dirt bike Pro Wheel Chock and retain both the kitchen and a two-person passenger seat for my kid.

The roll-on chocks were saviors when loading heavy adventure bikes alone. As their name implies, the front tire rolls across a pivoting plate, which secures the wheel and keeps the bike from rolling backward or falling sideways. I could then let go of the bike and walk around to tie it down. I have not experienced an easier way of loading motorcycles.

The bicycle/dirt bike Pro Wheel Chock operates as an ordinary chock. I had to hold the bike up while tying down at least one side of the handlebar. The chock secured bicycles with an arm that clamps down on a wheel.

I live down a 3-mile, rough, rocky dirt road. Getting up or down my steep “driveway” in an 8,000-plus-pound adventure van requires 4WD to avoid wheel spin on the loose rock embedded and hardpacked cliche.

Even with a KTM 790 Adventure R and a Husqvarna FE501 Dual Sport on board, the Bolt It On system never faltered. Nothing worked loose, and after the initial run, I never worried about damage to a bike or my van.

I have never been able to drive over rough roads without checking in the rear-view mirror constantly, and more times than not, I’ve had to get out and re-secure bikes before I acquired the Bolt It On system.

The Bolt It On motorcycle restraint system simplifies and eases loading and securing motorcycles and bicycles, reliably safeguarding the two-wheeled toys even while driving across rough terrain.

The modular design allows quick, tool-less installation and removal as well as allows for multiple configurations to adapt to various vehicles and changing interior space or gear-hauling needs. And the high-quality, made-in-the-USA, all-steel construction is extremely heavy duty. The Bolt It On system will outlive any of my motorcycles and my van.

I wholeheartedly recommend the Bolt It On system for anyone searching for a robust, reliable solution for hauling dirt bikes and bicycles, but with the full understanding that the system is expensive. But when considering the cost of the toys and the vehicle, the price becomes more justifiable.

Up Next: Ford Bronco 2021: That Was Worth the Wait

Saving…
Ford Bronco 2021: That Was Worth the Wait
How to Build Your First Road Cycling Kit
×