Nissan transformed the Pathfinder over the years from a rugged, small-truck-based SUV to a big-box-store goods-swallowing, soccer-parent errand machine.

Now as it enters its fifth generation, the 2022 Nissan Pathfinder hopes to recapture some of its original machismo all while retaining its usefulness in domestic life. And Nissan aimed to throw in just enough capability to keep weekends interesting for the whole family. But did the automaker succeed? 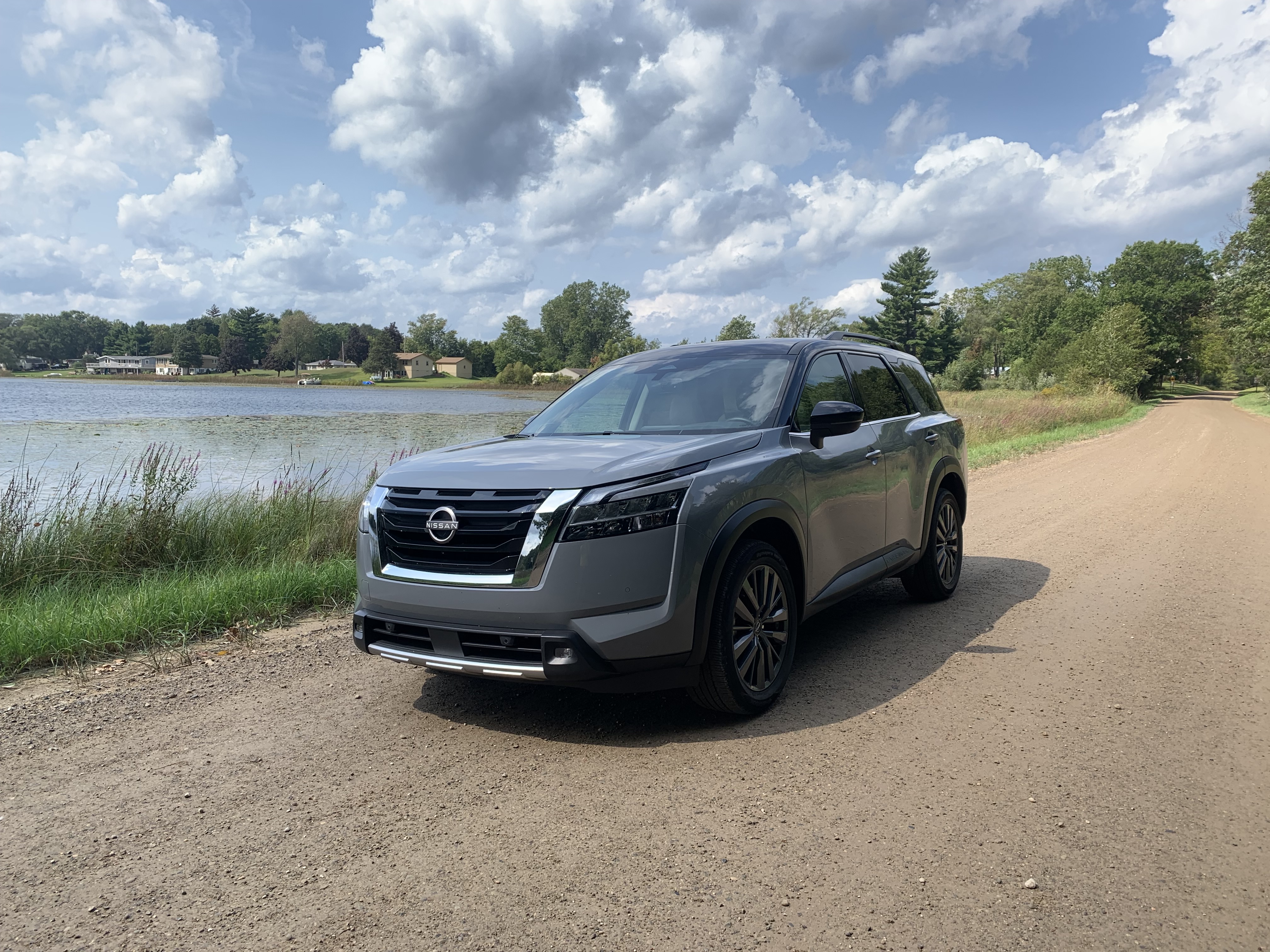 Nissan built the new, fifth-generation Pathfinder for 2022 on the 35th anniversary of the Japanese SUV and packed it full of useful kit. The engine carries over from the last Pathfinder, but little else does.

Some of the original Pathfinder comes through in the styling. Compared to the outgoing model, Nissan squared off the front and rear fascias and added sharp creases running along the body in between them. You also get a special version of Nissan’s grille, which it dubbed V motion, that includes three slots as an homage to the original. 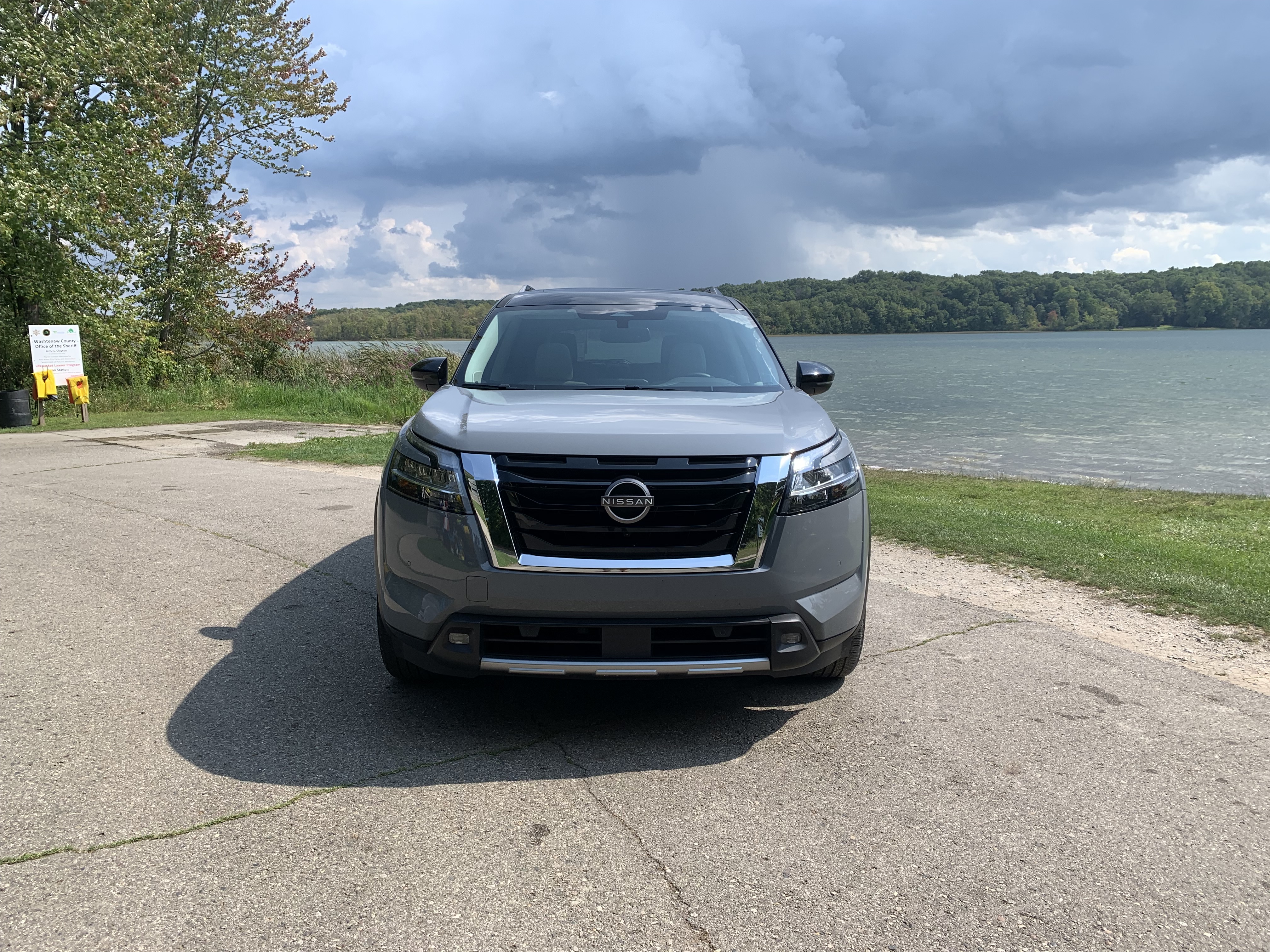 You could argue that the 2022 Nissan Pathfinder pays homage to the outgoing fourth-generation model as well, as it uses the same 3.5L V6 that continues to pump out 284 horsepower and 259 pound-feet of torque.

What’s different here, however, is crucial. Nissan binned the continuously variable transmission (CVT) and replaced it with a 9-speed automatic. And that makes the powertrain feel substantially better.

No more weird, nonlinear power delivery as the CVT gets a bit indecisive. No more engine continuously spinning at near redline as the Pathfinder slowly adjusts its cones and gains speed. Just quick, direct shifts from one gear to the next and positive — consistent — responses when you bury your right foot to the firewall. In all regards, this is a welcome change. 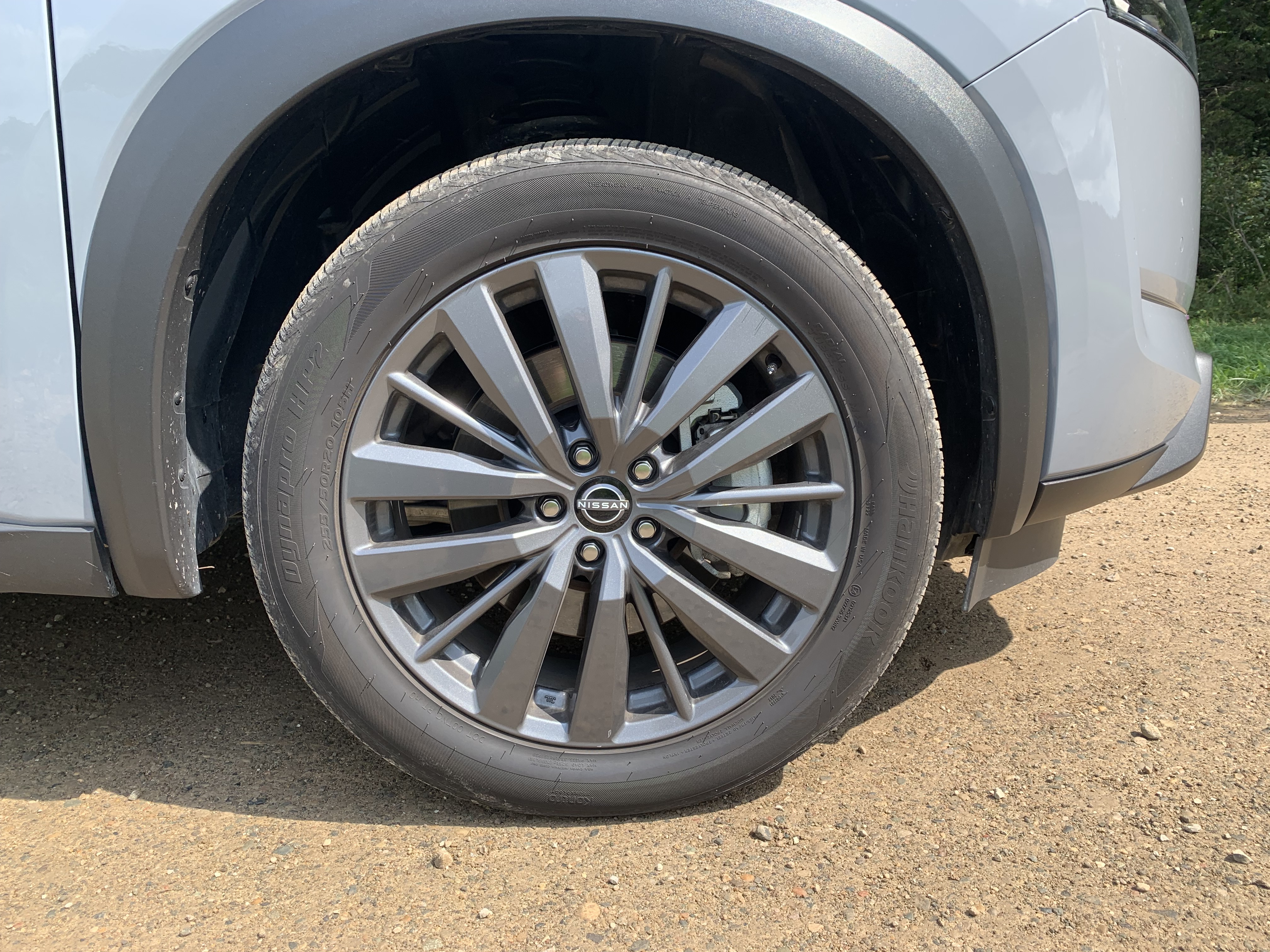 Furthermore, the four-wheel-drive system is new and includes seven drive/terrain modes: Standard, Sport, Eco, Snow, Sand, Mud/Rut, and Tow. All Pathfinders come with drive modes, but Sand and Mud/Rut options are only available with four-wheel-drive models.

Platinum models are the exception because it weighs over 150 pounds more than the base S model, regardless of drivetrain. That extra weight drops figures down to 20/25/22.

More Is More Inside 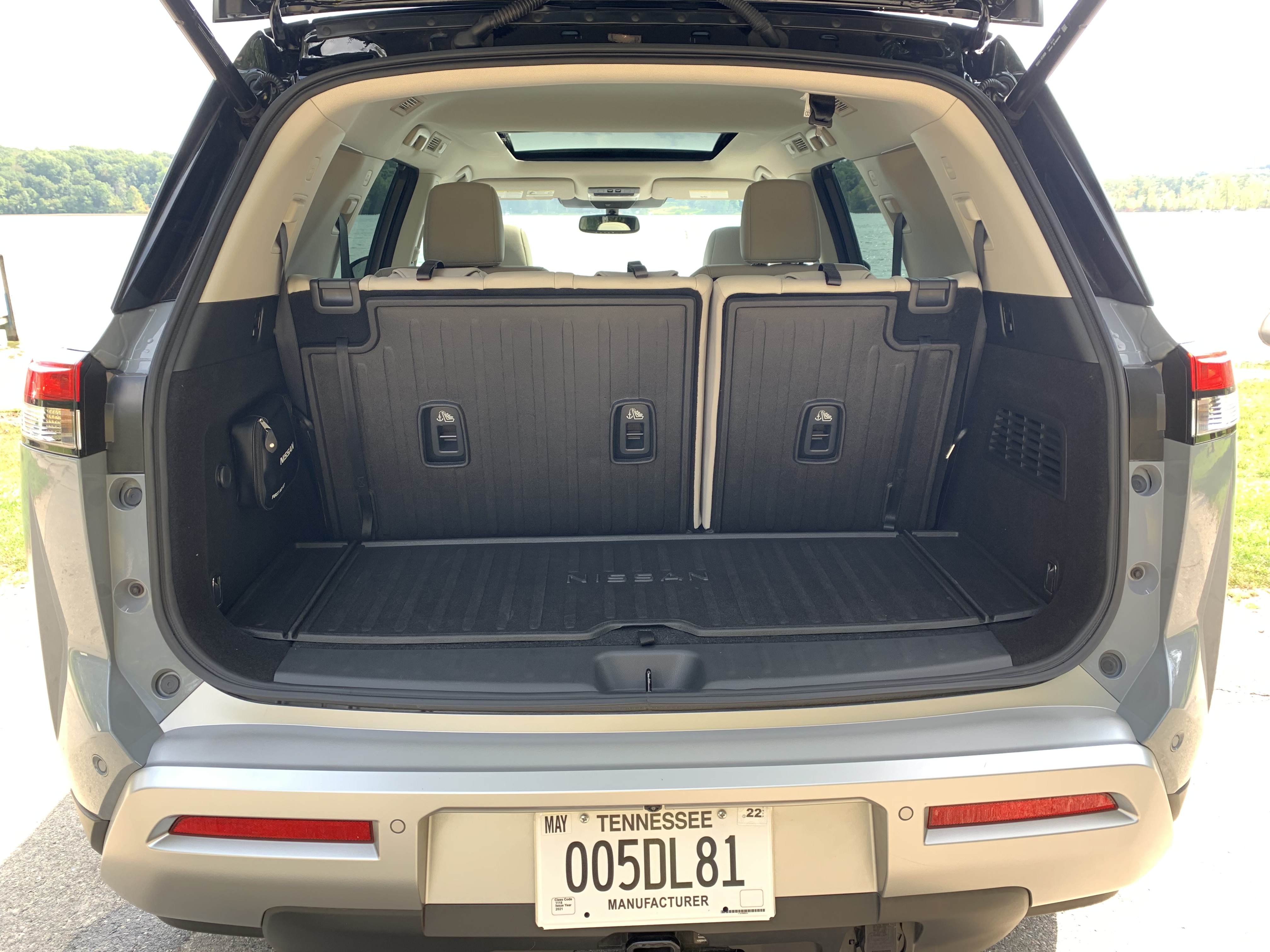 But much of what’s different about the 2022 Nissan Pathfinder is revealed after opening the doors. To start, despite keeping roughly the same footprint, this Pathfinder offers more than 10 cubic feet of cargo and passenger space than the outgoing model, 164.6 versus 154.0 cubic feet.

Nissan largely did it with extra width. That extra width also widens the rear track and wheelhouse to give the cabin a bit more breathing room.

Moreover, the floor space is more than 4 feet wide, if carrying flat sheets of plywood is your thing. In addition to that, underneath the load floor in the back is a hard plastic, three-section compartment that offers over 57 quarts of easy-to-clean space. 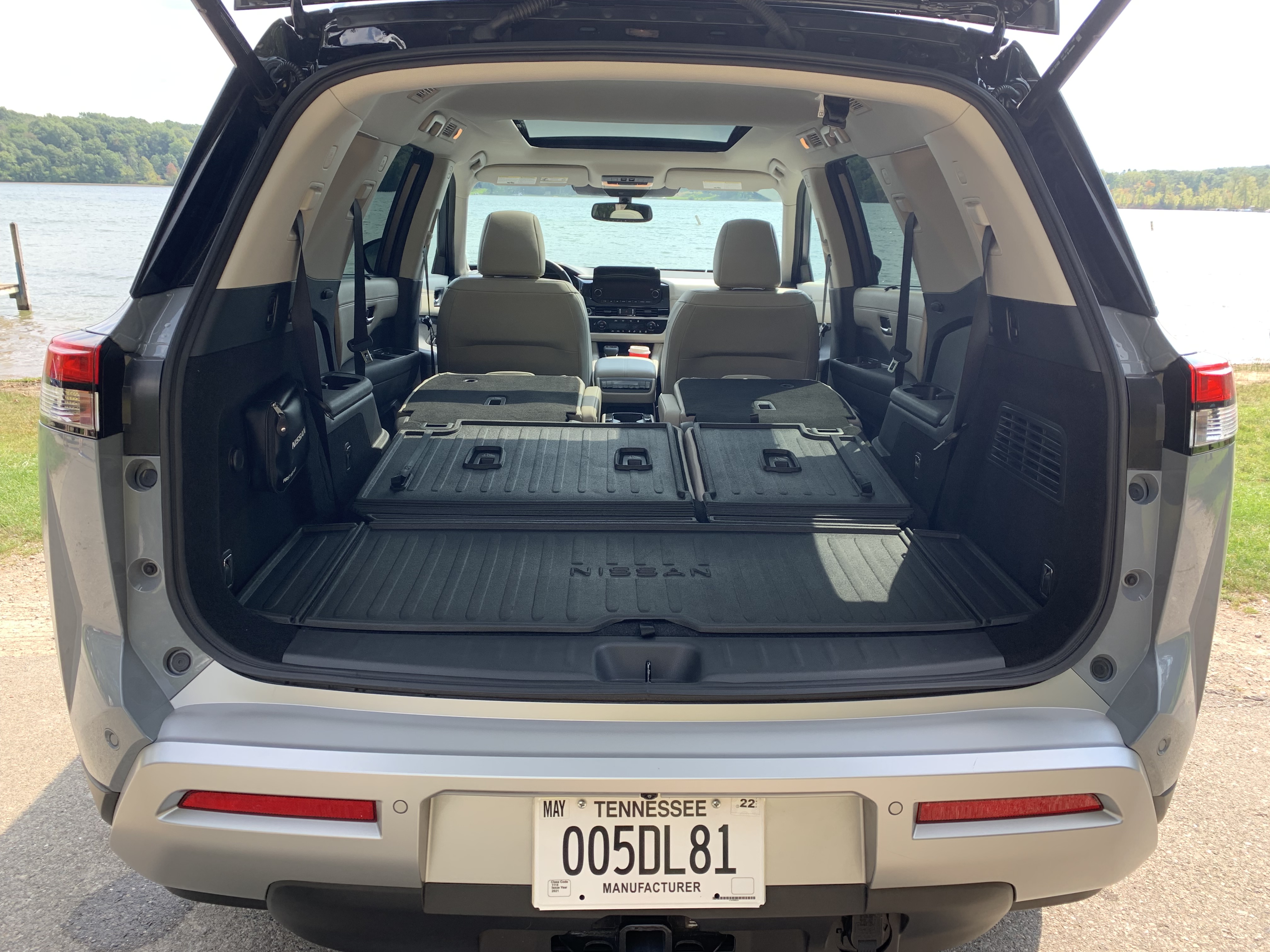 In a bit of ironic celebration, Nissan takes this added space and offers the option of fewer seats. You can now get a second row with two captain’s chairs instead of a bench with three seats. This is optional on the SV and SL models and standard on the top Platinum trim.

Doing so gets you two additional seats that are comfortable for adults. What’s more, three-zone climate control means said passengers can fine-tune their temperature needs.

For the car enthusiasts among us, the 2022 Nissan Pathfinder underwhelms. Compare it to, say, a Mazda CX-9, and you’ll get noticeably less engagement. The steering feels light and less precise than the best systems out there, and it just feels hard to get in tune with the Pathfinder’s motions.

That said, we are talking about a three-row SUV here, and Nissan made big improvements to the chassis to vastly improve body control and give the Pathfinder competence in almost any driving situation.

To start, Nissan installed new shocks and increased the use of high-strength steel when building critical suspension components. Doing so raises roll stiffness, or the resistance to body roll, on both the front and rear axles. Essentially, the body is better controlled and more behaved, even if you chuck into a corner with little regard for tire life. 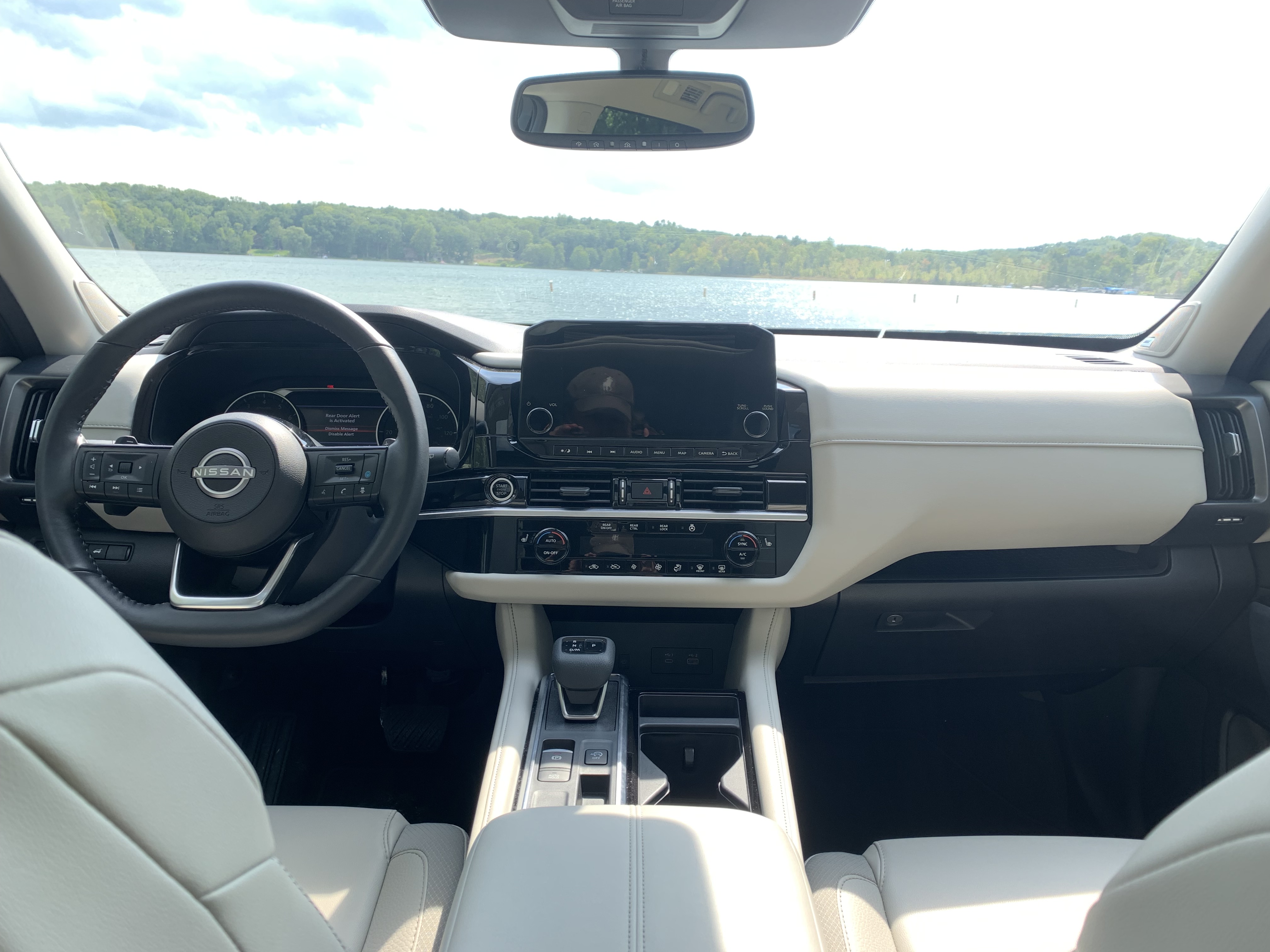 Choose Your Own Adventure

I never left the pavement with my test car, but for those seeking a bit of dirt, such changes will lead to improvements off-road as well, as will the aforementioned drive modes. But bear in mind that ground clearance is merely a decent 7.1 inches, as are the 16.1 degrees angle of approach, 20.9-degree breakover angle, and 15.6-degree angle of departure.

If you seek your adventure with toys you tow, rather than the SUV itself, the Pathfinder proves an able machine. Any Pathfinder will tow up to 3,500 pounds. If you get the towing package, which increases transmission cooling along with a hitch and wiring, that bumps up to a very healthy 6,000 pounds — more than most recreational toys weigh.

Regardless of trim, the Pathfinder comes with at least 10 airbags. Two in front, two more on either front side, two for the curtain, two on the side for the second row, and two knee airbags back in front.

Platinum models get an 11th airbag, which inflates in between the two front passengers to prevent any person-to-person contact. After all, a collision is a wonderful moment to get some alone time, especially from others’ flailing limbs. 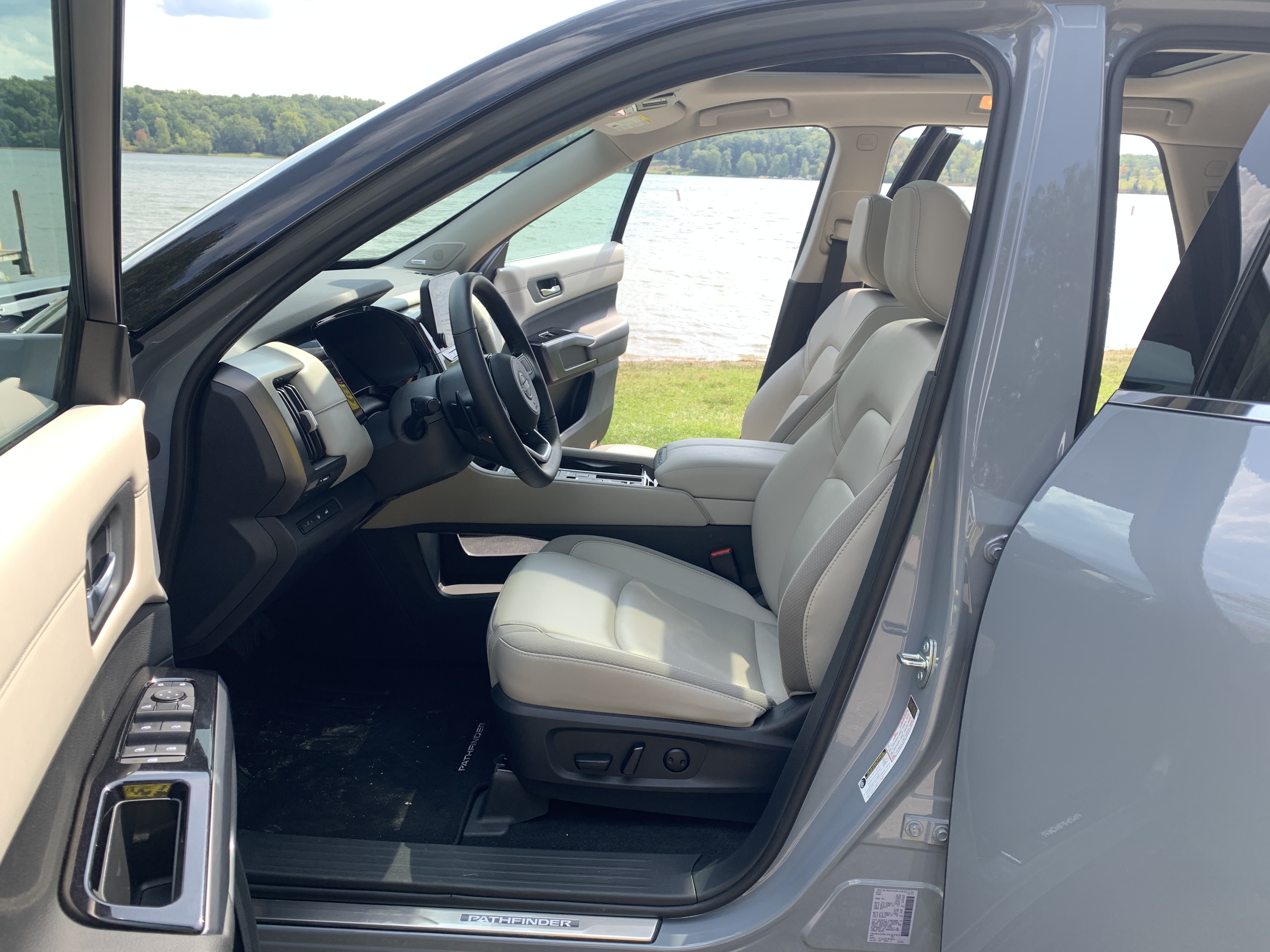 My SL test car also included what Nissan calls ProPilot Assist, which is adaptive cruise control that helps keep you in the center of the lane. Additionally, it’s tied to the Navigation system and will automatically slow down for upcoming corners, if you’re into that kind of thing.

Did Nissan Find a Good Path?

The least expensive Pathfinder available for 2022 is a front-wheel-drive S model, which costs a reasonable $34,585. The Platinum Pathfinder with all-wheel drive squeezes in just under $50,000, at $49,265. It includes gobs of luxury items like a motion-activated power liftgate, a 13-speaker sound system, and a heads-up display.

The test car you see before you, an SL with the premium package, meets in the middle nicely and costs $45,795. All the above options are competitive against similar-sized three-row SUVs. 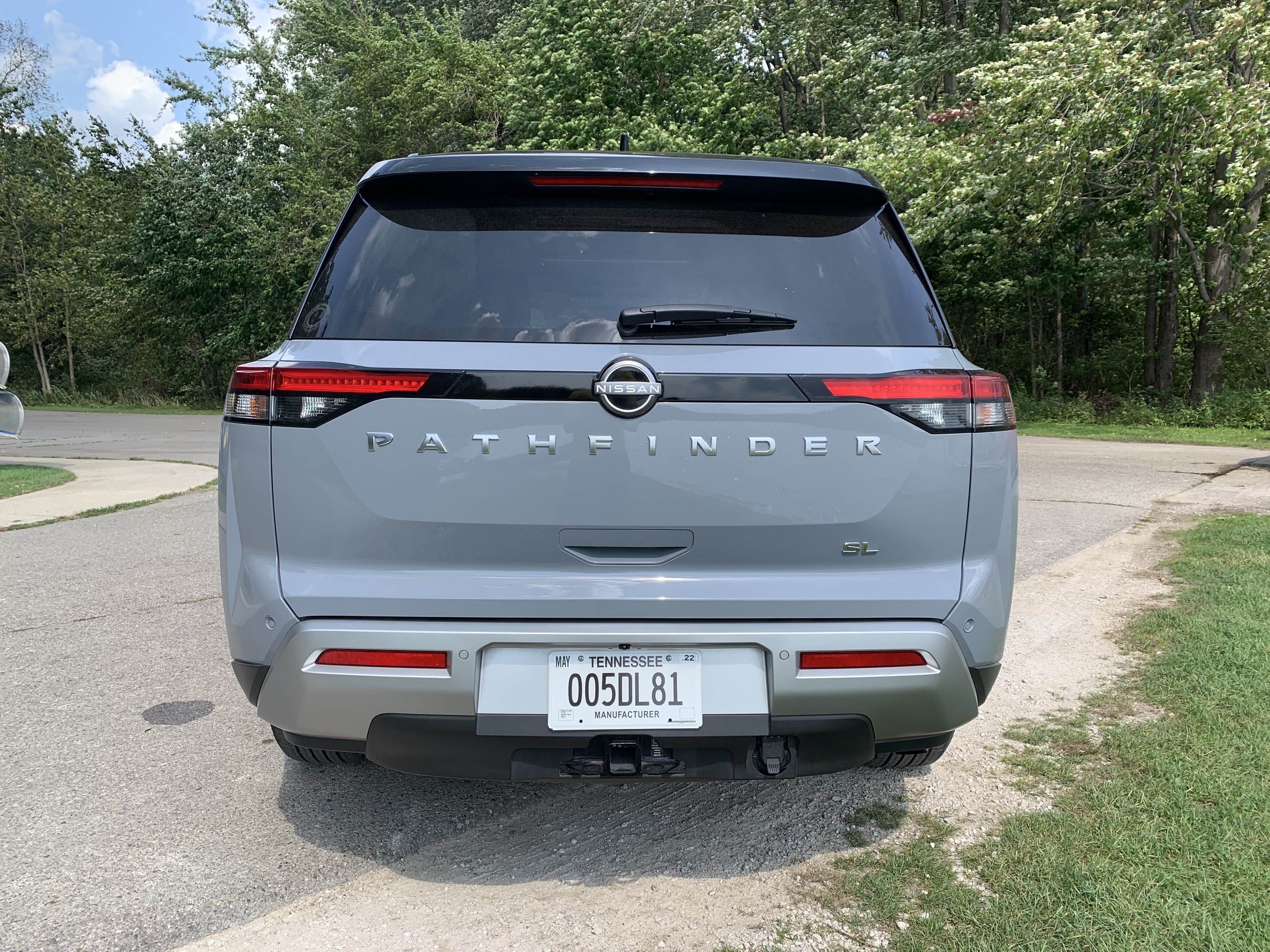 Furthermore, the Pathfinder drives significantly better than the outgoing model and offers more room and interior seating options to boot. Those seats provide good levels of comfort and support. You and your passengers would find several ways to keep occupied on a road trip and be able to keep all your smart devices charged.

You get a lot of storage space and reasonable flexibility to veer off-road a touch. It’s a nonenthusiast’s jack-of-all-trades and more than capable of sustaining domestic tasks.

But if you’re looking for a bit of driving fun on top of all of that, look elsewhere.

Up Next: ‘Mad Max’-Style Off-Road Race: Your Guide to Rebelle Rally 2021