No, we won’t get the Land Cruiser 300 in North America, but we will get the 2023 Toyota Sequoia TRD Pro. While the previous Sequoia didn’t get us very excited, this one does!

The all-new 2023 Sequoia will be built on the same fully boxed frame architecture that will underpin the 2022 Tundra and 2022 Land Cruiser 300/2022 Lexus LX 600. Although the Land Cruiser won’t make it to North America, the other three Toyota body-on-frame vehicles on this platform will.

We like things bigger in America, so instead of the Land Cruiser, we’re getting the third-generation, three-row 2023 Sequoia TRD Pro full-size SUV. It won’t feel as nimble off-road or around the city, but on paper, it looks to have all the right ingredients of a truly formidable adventure machine.

“Our primary design goal for Sequoia was to create a sophisticated, yet tough and active lifestyle SUV that looks capable of handling a diversity of big adventure needs,” said Kevin Hunter, president of the U.S. Calty Toyota Design Studio. “That holds true whether it’s a night out on the town with friends, towing a boat to the lake with family, or taking a more extreme off-road adventure.”

Admittedly, I’m a bit of a tire nerd and I love to geek out on all aspects of the ubiquitous rubber donuts. However, for many vehicle owners, tires are just round, black, and confusing circles that are a necessary evil when it comes to vehicle maintenance. Read more…

First, let’s talk about why the new Sequoia makes for a compelling adventure vehicle.

First, it should have the durability of a Land Cruiser while offering more room to haul friends and gear. It will also be able to tow up to an impressive 9,000 pounds.

And that towing may prove easier than ever, thanks to the available Load Leveling Rear Height Control Air Suspension, power-folding/extending/retracting tow mirrors, and a Tow Tech Package with all the cameras and backup assist features.

Next, the Sequoia will have plenty of power, while remaining efficient. The standard (and only) engine option on the 2023 Sequoia is the twin-turbo V6 hybrid i-Force Max, which Toyota just introduced on the 2022 Tundra.

In the Sequoia, this translates to 437 horsepower and 583 pound-feet of torque. While we don’t know fuel economy numbers just yet, Toyota expects to be at the very top of its competition in the full-size SUV category.

It will also be substantially better than the outgoing Sequoia, which offered a dismal 13 mpg city and 17 mpg highway.

The 2023 Toyota Sequoia will come in five trim levels: SR5, Limited, Platinum, TRD-Pro, and the new top-of-the-line Capstone. Two-wheel-drive will be the standard on all but the TRD Pro, where 4WD comes standard. However, all 2023 Sequoias will offer an available part-time 4WD system, selectable by a lever on the center console.

All will also offer standard Toyota Safety Sense 2.5 with active safety systems, like a Pre-Collision System with Pedestrian Detection and Dynamic Radar Cruise Control. An 8- or 14-inch touchscreen with Toyota’s new multimedia system, including “Hey Toyota” Intelligent Assistant, will dominate the dash of all-new Sequoia.

Every Sequoia has three rows, but the second row can be configured with a bench or captain’s chairs. In the back, owners can option a fancy new sliding third row with a cargo shelf system.

Now you know the basics — why the 2023 Sequoia is more compelling than its predecessor. Let’s now talk about the version you really lust after.

The 2023 Toyota Sequoia TRD Pro gets you all the off-road capability and sporty looks you want, and most of the luxury features you’ll enjoy.

Those TRD Wheels also have an increased offset for a wider, more confident stance. Plus, you’ll have Multi-Terrain Select, Crawl Control, and Downhill Assist Control.

The TRD Pro Sequoia also offers sporty looks to complement its off-road chops. Up front, you get a blacked-out “TOYOTA” grille with an embedded lightbar and marker lights.

On top sits a TRD roof rack. And out back, you’ll find a TRD Pro exhaust that Toyota says will not only provide visual appeal, but also added growl. Inside, a TRD-heated steering wheel, TRD accents on the seats and shift knob, and standard second-row captain’s chairs complete the look.

Oh, did I mention the best part? The 2023 TRD Pro exclusive color for the Sequoia is the same “Solar Octane” we’ve seen on the 2022 Tundra.

We’re all impatient. But Toyota isn’t going to make us wait all that long for the all-new Sequoia. The big SUV is expected to start rolling out of the San Antonio, Texas, manufacturing plant this summer. 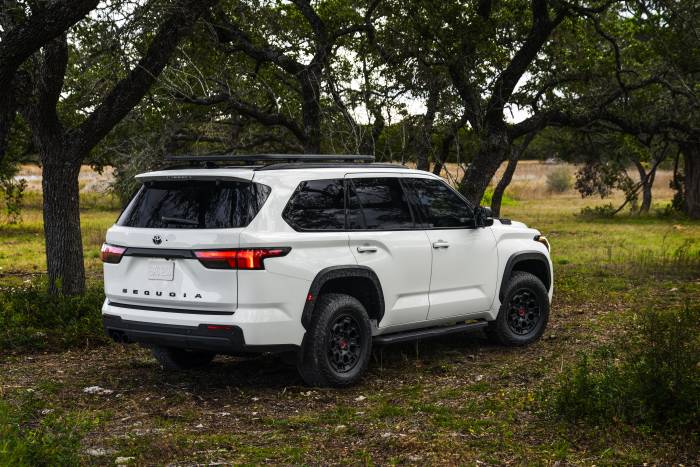 While pricing isn’t available just yet, the current Sequoia starts just north of $50,000. With all the new features included as standard on the new Sequoia, we’d guess the base price will start closer to $55,000, with the top-spec TRD Pro and Capstone models being closer to $80,000.

I Bought My 'Dream' Tacoma and Hated It: Here's How I Fixed It

The nation’s top-selling midsize truck has some serious shortcomings. But I fixed them — and so can you. Read more…