The United States won’t get the off-road legend that is the Land Cruiser for 2022. But the 2022 Tundra might ape its performance by borrowing its engine and the bulk of its chassis suspension.

For years, the Toyota Tundra has enjoyed stable sales in the American full-size truck market. But unlike its smaller cousin, the ubiquitous Tacoma, it’s never been an off-road staple.

Enter the redesigned 2022 Tundra. Onboarding the bulk of the foundational components from the 2021 Land Cruiser, it’s positioned to be the best Tundra we’ve ever seen for driving off the map. It also uses the engine from the 300 series, adding an option that pushes almost 600 pound-feet of torque. Notably, there’s no V8 option — for the first time in Tundra’s 21-year history.

Here’s our first look at the 2022 Tundra — the closest thing you can get to a new Land Cruiser in the U.S. And if you just need to build a little stoke, here’s a goosebump-inducing sizzle reel from the GearJunkie Podcast’s friend The Pandra:

For 2022, Toyota extensively redesigned the Tundra’s chassis, based on the Land Cruiser’s. The designers sought to add stability and towing capacity without tipping the scale too far, using a combination of high-strength steel and aluminum. It also dropped in various new structural supports and redesigned existing ones.

Since the truck would get an all-new chassis, it would also need an all-new suspension. So Toyota onboarded coil springs from the Land Cruiser for all four feet, ditching the previous generation’s leaf systems.

The rear setup is multi-link, engineered to improve stability and handling dynamics, as well as add grunt for towing. Towing capacity is up to 12,000 pounds (17.6% more than the previous generation), and payload maxes out at 1,940 pounds (11% more).

The update enabled Toyota engineers to make changes like moving the shock absorbers outside the frame rails. Overall, the update should reduce body roll and improve handling and straight-line stability. 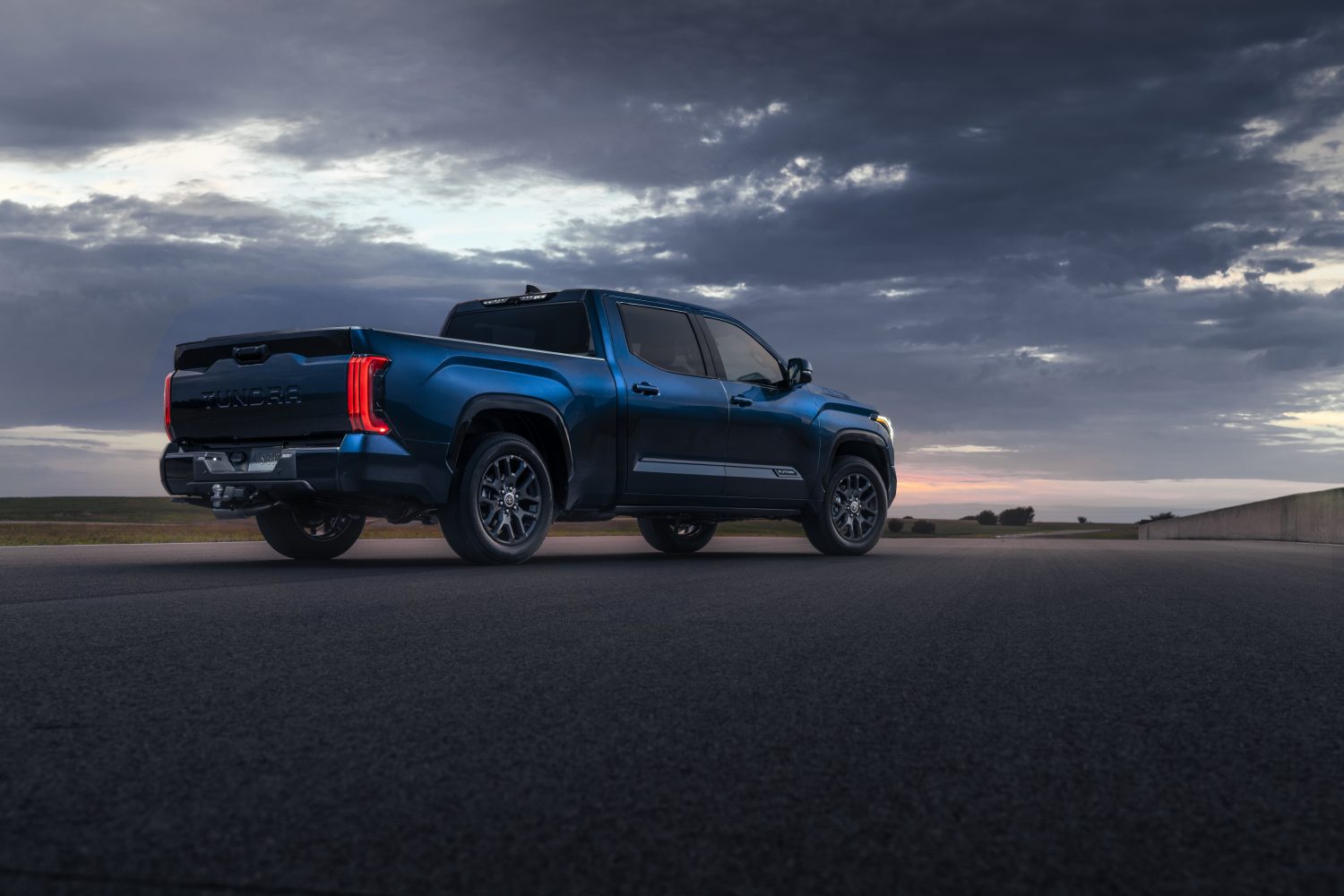 Up front, the Tundra borrows the Land Cruiser’s double-wishbone setup for added ride comfort and durability.

According to the brand, the update improves cornering by lowering roll steer by 25% over the previous benchmark and elevates the roll height center by roughly 2 inches to reduce body roll. An upsized castor trail adds stability.

No V8, But a Beastly Range Topper

The 2022 Tundra will also offer the Land Cruiser’s two different powerplant configurations. The lack of a V8 is bound to raise some eyebrows, but Toyota drops in a proprietary upgrade to assuage concerns.

The base unit is a twin-turbo 3.5L V6 that delivers 389 horsepower and 479 pound-feet of torque. But it gets burly if Toyota equips it with its bell-housing motor system, the i-FORCE MAX. Check out this press release from Toyota to read into how the ingenious system works.

For our purposes, the output is the important part: 437 horsepower and a massive 583 pound-feet of torque at 2,400 rpm.

Both configurations get the Land Cruiser 300’s 10-speed automatic transmission.

But the centerpiece of the tech suite is Toyota’s new Audio Multimedia System, which gets a claimed five times more processing power than its earlier variants for its standard 8-inch and available 14-inch screens. Endemic functions include voice and sight activation, and a cloud-based navigation system to give drivers updates in real time.

Of course, the system also works with Apple Car Play and Android Auto. 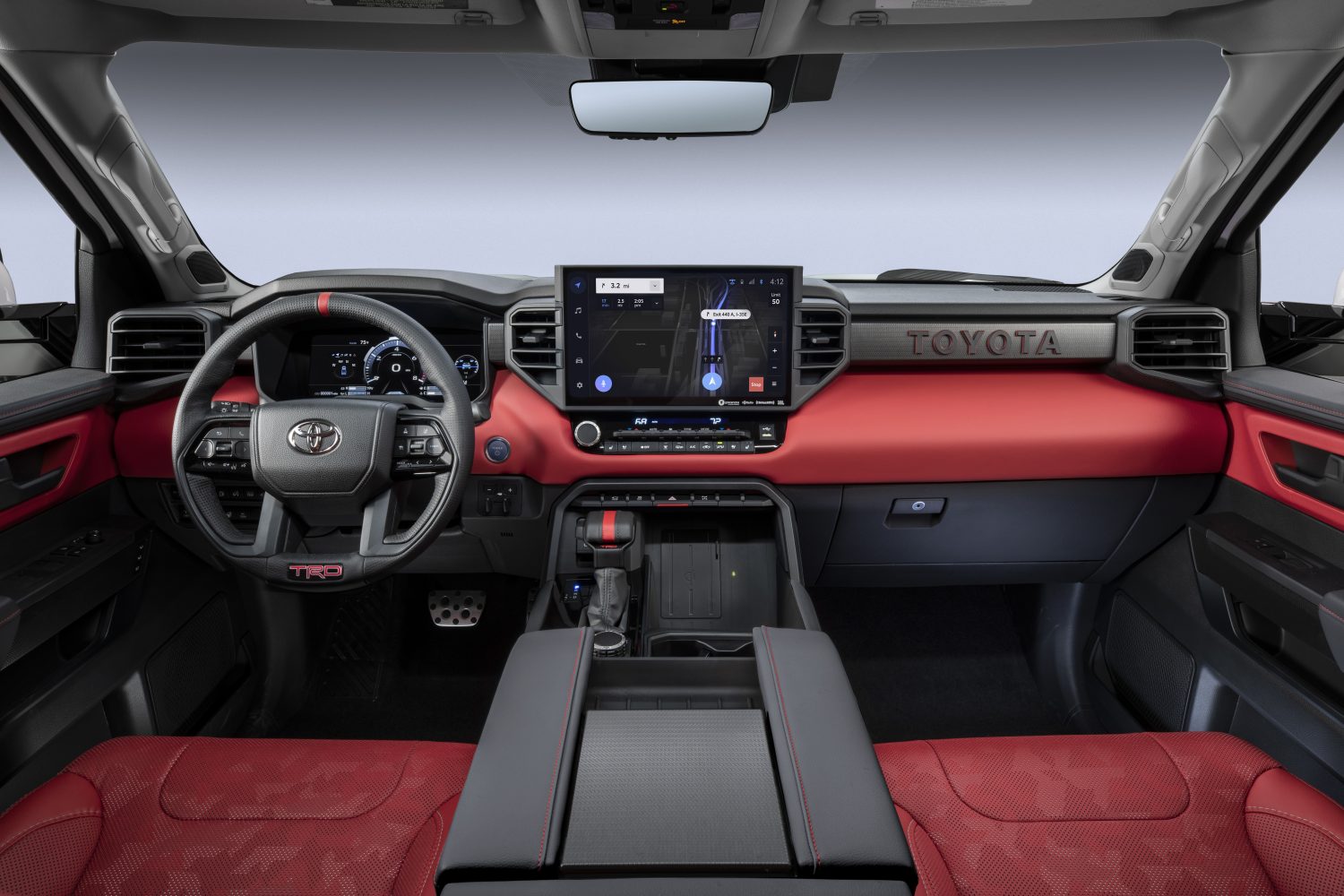 At the time of writing, there’s no telling how much the 2022 Tundra will cost. Specifics on trim level loadouts also aren’t currently available. Toyota simply says the truck will go on sale later this year, and that it will announce pricing closer to the on-sale date.

Here are the specs: 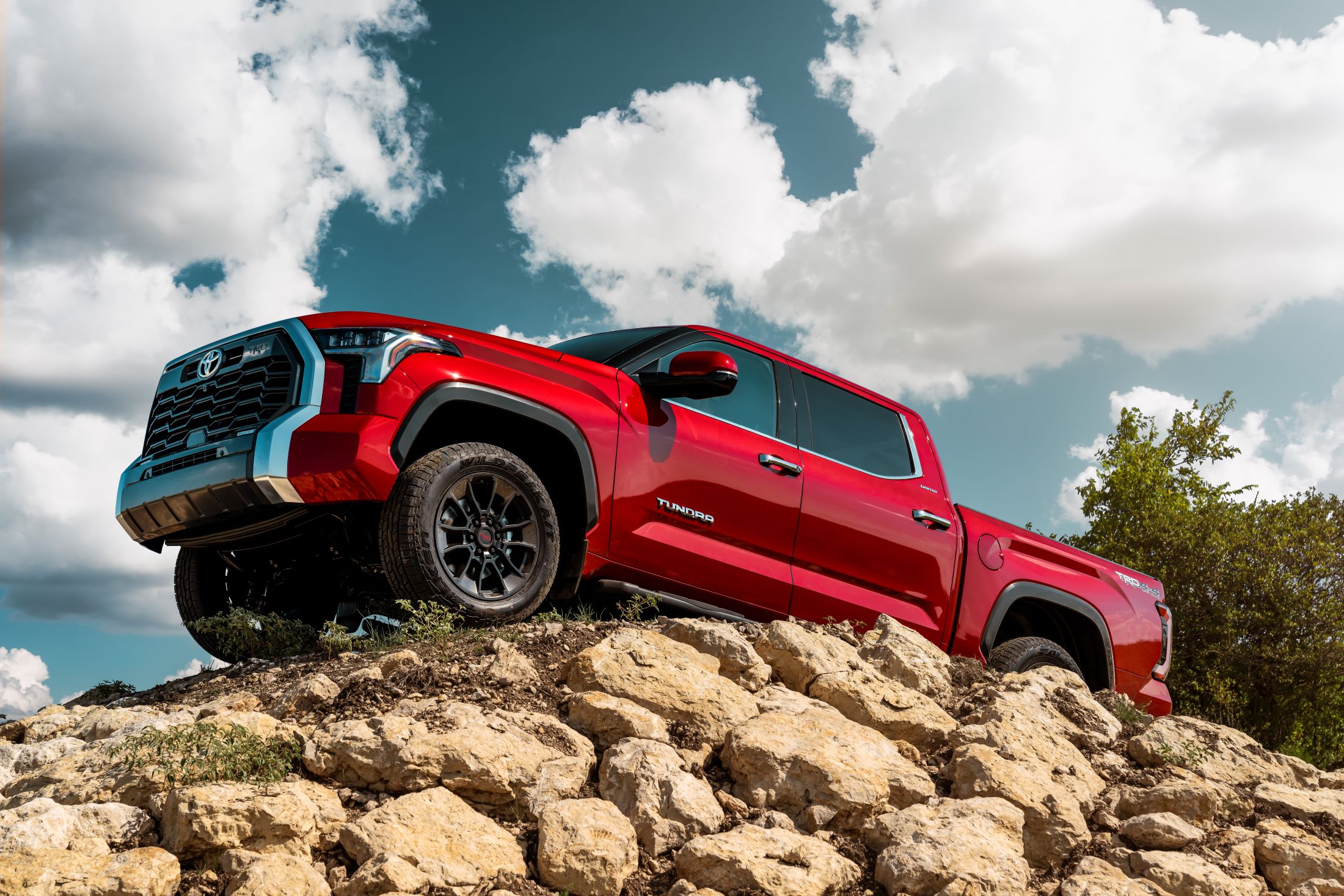 However, the brand did release a massive amount of minutely detailed information about the redesign today. You can read the laundry list of specs and features at Toyota’s Tundra landing page.