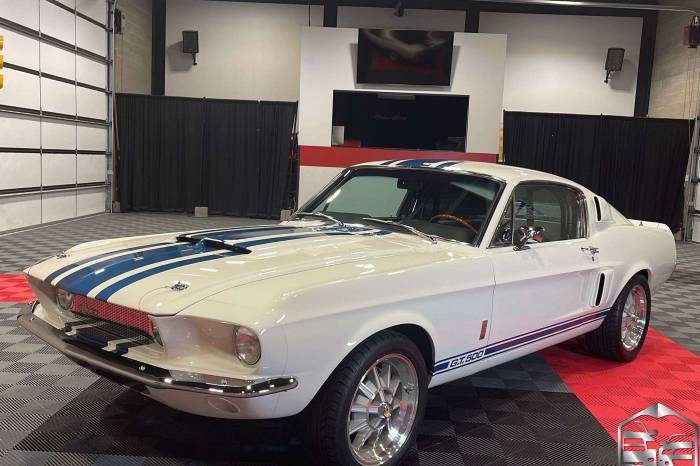 The Shelby GT500 Super Snake shows why it’s one of the most venomous of all Mustangs.

A continuation Shelby Mustang has sold for a record price at auction. With just 10 Shelby GT500 Super Snake continuation cars built, this is the first one to go up for resale, and it snagged an impressive bid of more than $600,000.

The original Ford Shelby GT500 Super Snake was a one-off. Built for Carroll Shelby himself, the car packed a 550-horsepower 427-cubic-inch (7.0L) V8. Shelby packed the V8 with gear from its Le Mans racers like aluminum cylinder heads and a forged crankshaft.

The car was designed and built to show off the new Thunderbolt tire from Goodyear, and it delivered. The car could top 170 mph and set a top-speed world record on a 500-mile test. No problem for an engine designed to handle the 24 Hours of Le Mans in the back of a Ford GT40.

The Super Snake was too extreme even for Shelby’s usual Cobra customers, though. And it was extremely expensive. The company only built one demonstrator prototype before moving on.

Shelby American brought back the Super Snake name a few times, starting in 2011. The name went on supercharged and beefed-up versions of the same Mustang that was sold new the same year.

Continuation Series Brought Icon Back in 2018

In 2018, the famous Ford modifiers tried something different. Early that year, Shelby American and Ford Performance announced what they called the reintroduction of the 1967 Ford Shelby GT500 Super Snake.

Shelby American started by buying original 1967 Ford Mustangs. That means actual Ford vehicles with a factory VIN and a real title. Then, Shelby stripped the cars down to the bare metal and began a complete restoration — along with the transformation into a GT500 Super Snake.

There were more options on the continuation car than on the original. Buyers got a 427-cubic-inch V8 built by the Carroll Shelby Engine Company, but they could pick an iron block for authenticity or aluminum for less weight and improved performance. Or go for even bigger engine options.

Either way, you were going home with more than 550 horsepower controlled by a four-speed manual transmission.

Shelby had more performance tweaks for the continuation Super Snakes, including a 9-inch rear end with a limited-slip differential, disc brakes at all four corners, and 17-inch wheels to fit modern tires.

Modern Buyers Could Get Even More Power

While all 10 of the continuation Super Snake cars used the Ford 427 FE block, some buyers wanted more power. That’s why this car has a 468-cubic-inch version of the engine. A dyno sheet from the Carroll Shelby Engine Co. shows that the car made 561 horsepower and 598 pound-feet of torque when it was tested before installation.

Ten continuation cars were built, and this is number three. It was put up for auction at the Trucks and Auto Auctions 4th Annual Northwest Collector Car Auction. With 13 bids coming in, the car sold for $602,500.

Trucks and Auto Auctions calls it a record, and the hammer price is a bargain against the $2.2 million the original sold for in 2019. It’s still much more than the $250,000 Shelby asked for one of these continuation cars when they were built, so can we call it a good investment? Probably!

The original buyer of this car opted for the classic Wimbledon White with Guardsman Blue stripes to mimic the original. The GT500 stripes on the side match the “regular” GT500’s stripes, but the ones on the hood are different.

Look closely and you can see the special Super Snake stripes. A single wide stripe with a narrower stripe on each side instantly lets you know that this is not your standard Shelby Mustang.

The car wears a black leather and vinyl interior. Those are “deluxe comfort weave bucket seats,” but are absolutely laughable compared to the buckets in any modern car. It’s just part of what makes this throwback so special — and why there were so many buyers willing to spend so much to get it.

The Super Snake gets tilt steering to go with that wood steering wheel, and there is a roll bar in the back. Because it was built in 2018 and not 1967, the original buyer went for a custom stereo, and the car has air conditioning for comfort. This snake should be a little bit more civilized than the original.

Carroll Shelby himself has signed the dash. It’s a big deal in the circles around these cars to get that ink. There’s a dash plaque that gives the car’s place in the Shelby registry and proves it is number three, and the paperwork includes a stack of certificates of authenticity for the car and its engine.

Will the other nine continuation cars surface and change hands for even more money? Only time will tell, but for sure these will always be very special cars.