We spent a day in California wine country behind the wheel of the all-new 2022 Kia EV6, the first vehicle on the company’s all-new global battery-electric platform.

We could be reaching the tipping point for battery-electric vehicles. Demand doubled in 2021 and is expected to grow even more rapidly as the number of long-range models coming to U.S. showrooms more than triples.

Kia’s new EV6 is definitely one to keep your eye on. It boasts great looks, impressive performance, and solid range. But it also adds a “vehicle-to-load” function that allows motorists to draw power from its battery pack, whether at work or a campsite — or simply to keep appliances powered up during a blackout. 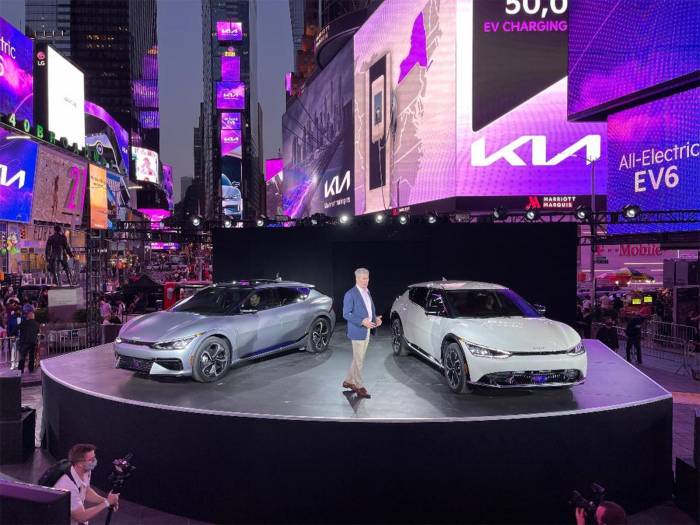 The Kia EV6 made a splashy debut last May in New York’s Times Square, though we had to wait a while before the Korean carmaker finally had a production-ready model for us to test. To get a feel for what the electric SUV has to offer, we headed out for a long day’s drive through Napa and Sonoma wine country, north of San Francisco.

Kia isn’t a newbie to the market for battery-electric vehicles (BEVs), having launched a BEV version of the quirky Soul back in 2014. But the EV6 is its first offering based on the e-GMP “architecture,” a dedicated, skateboard-like platform shared with its Korean siblings Hyundai and Genesis.

Eventually, it will underpin an array of new, all-electric models. And if the 2022 EV6 is any indication of what’s to follow, Kia is on track to give BEV market leader Tesla a serious run for the money.

Kia: A Brand in Transition

Kia is a brand in transition. Once known for building basic econoboxes, it is quickly shifting its image with more sporty and stylish models like the Stinger coupe and Telluride SUV — the latter model named North American Utility Vehicle of the Year for 2020. 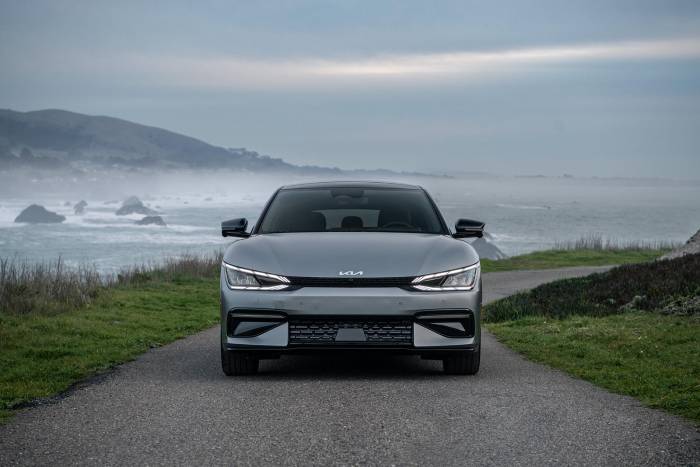 The EV6 takes things to a new level, especially when it comes to styling. Trying to define the new model isn’t easy. Ask the folks at Kia and they’ll describe it as a blend of SUV, sports coupe, and even a station wagon.

It sits low and wide, with a sleek shape heavily influenced by the wind tunnel. Up front, cat’s eye LED lighting frames a new take on the now-familiar Kia “tiger nose” grille.

A gently sculpted hood and steeply raked windshield flow into a coupe-like roof and an aggressively angled tailgate with its integrated spoiler. Flush, wind-cheating door handles pop out when you’re stopped and unlock the vehicle.

EV6: Room for Your Gear and Your Friends 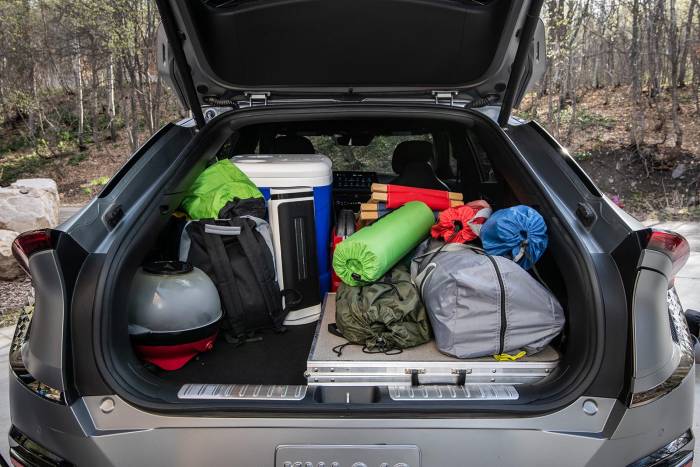 On paper, the EV6 falls into the compact crossover column. But that’s misleading. With its low rolling-resistance tires moved out to the corners, the wheelbase is a full 114.2 inches, exactly the same as that three-row Telluride.

And with the e-GMP platform relocating EV6’s motors and battery pack beneath the load floor, Kia engineers recaptured space that’s normally used for an engine compartment. The result is a midsize passenger compartment and lots of storage space.

That includes a modest-sized “frunk” under the hood. It’s one of a number of useful storage nooks Kia has built into the EV6, on top of the crossover’s 24 cubic-foot cargo bay. (This more than doubles to around 50 cubic feet with the back row folded down.) 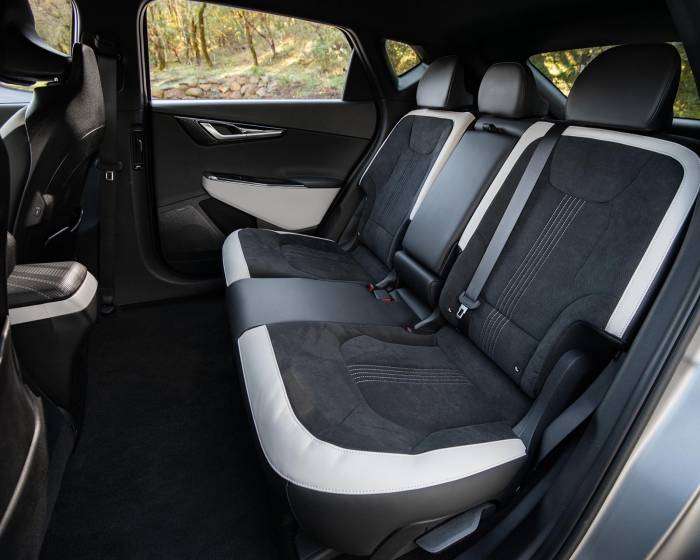 The cabin is roomy — with a flat floor and a large floating center console — and surprisingly sophisticated, with an elegantly styled instrument panel topped with twin 12.3-inch digital displays. One replaces the conventional gauge cluster; the other operates an all-new infotainment system that replaces the UVO technology currently found in the rest of the Kia lineup.

A Wealth of Technologies 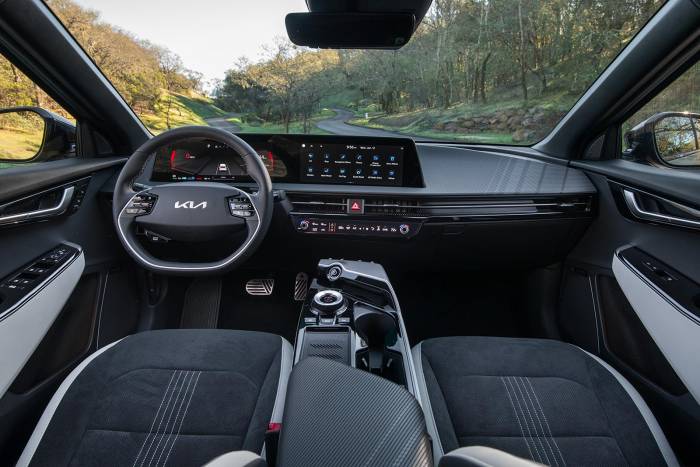 There’s an impressive list of technologies built into the electric crossover, depending on which of the three trim packages — Light, Wind, or GT-Line — you choose.

On fully equipped models, this includes wireless versions of Apple CarPlay and Android Auto and wireless smartphone charging. There’s also an augmented-reality head-up display that points out where to make a turn when using onboard navigation. An audiophile Meridian sound system is available, as well.

And EV6 has up to 21 advanced driver assistance systems, including one that helps prevent a motorist from inadvertently turning into oncoming traffic.

For all these digital goodies, Kia avoided the mistake made by a number of competitors. There’s a radio tuning knob, for one thing, and actual “hard” buttons for the climate control system, including the steering wheel and seat heaters.

One fun (and useful) feature goes by the name “Vehicle-to-Load.” It’s an officious way of saying that you can reverse the flow of electrons, with several AC outlets built into the EV6.

At a lunch stop, Kia demonstrated the usefulness of this feature by powering some appliances. You could use it for a TV when tailgating or camping, or to keep things powered up at home if the power goes out.

The EV6 can be paired with an Apple Watch to track and operate a variety of vehicle functions. And it also can link to the Alexa voice assistant which allows you, among other things, to preheat the cabin on a cold day. 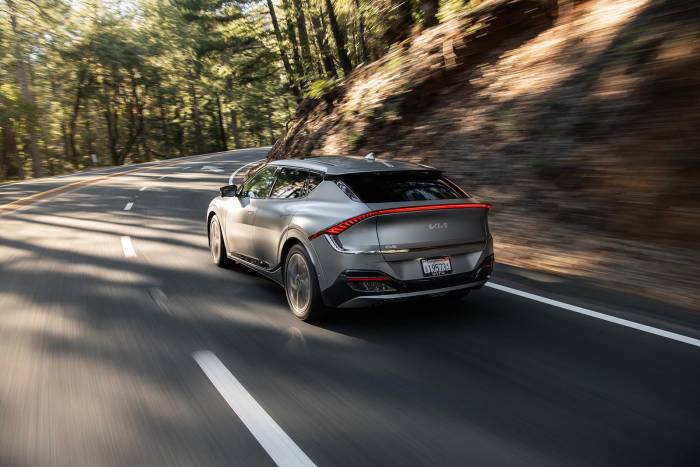 Range anxiety remains one of the biggest concerns for those not quite ready to buy a BEV yet. While it’s not the new mileage champ, the EV6 helps reduce range worries. Its various models offer a minimum of 232 miles per charge for the base Light model with its 58-kilowatt-hour lithium-ion battery pack. 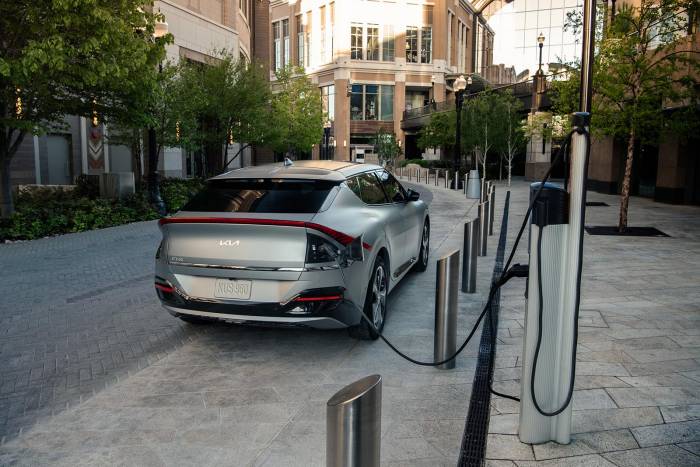 Charging a drained battery will depend on what you plug into. At home, expect to spend the night with a 240-volt charger to get back to 100%.

The EV6 uses an 800-volt electrical architecture, twice that of most current BEVs. That allows a motorist to take full advantage of the latest public quick chargers, adding up to 217 miles of range in just 18 minutes.

We spent the day driving a pair of fully equipped GT-Line models, one with RWD, the other with the AWD package. The GT-Line adds 20-inch wheels and tires, as well as niceties like the HUD system.

The tires are not only larger but also offer a grippier compound that helps cut 0-to-60 times down to a factory-estimated 4.6 seconds. That’s about 0.6 seconds faster than Ford’s mid-range, all-wheel-drive Mustang Mach-E, though not quite up to the numbers for the GT model.

Kia plans to add a true EV6 GT model sometime late this year or early in 2023. Kia says that model will bump the pony count up to around 570 horsepower and drop 0-60 times to under 3.5 seconds.

Heading out from our base in Sonoma County’s tony village of Healdsburg, it didn’t take long to notice the way the EV6’s styling turned heads and drew more than a few thumbs up. But it was the driving experience that proved particularly impressive.

The electric crossover’s new platform yields a near 50:50 weight balance and a low center of gravity. These features were readily apparent as we wove our way through wine country’s winding mountain passes.

Another EV6 feature that enhanced the experience is called 1-Pedal driving. Today’s EVs all use brake regeneration to recapture energy lost during braking and coasting. Going from kinetic to electric energy, it goes back to the battery pack to boost range.

With the EV6, you can choose from four regen modes. The most aggressive feels like you’ve downshifted a gas engine several gears. Simply lifting off the throttle is enough to slow you down quite aggressively as you go into a corner. It can even bring you to a complete stop when needed.

Even on some of the most aggressive roads, I found myself flipping from throttle to brake only a fraction as often as I would normally when in 1-Pedal mode.

If there’s a weak link, at least from a performance perspective, it’s the tires. They’re designed to reduce road friction and maximize range. Even so, the EV6 was surprisingly easy to manage. It had just the right amount of steering boost and a suspension that proved surprisingly predictable and manageable.

The AWD package is clearly the choice for aggressive drivers, despite the modest sacrifice in range. It took some truly hard driving to get the back end to break loose in a tight corner. Even when it did, it was easy to get the EV6 back in line.

The overall ride is far more luxurious than one might expect from the Kia brand. And, indeed, the EV6 is as quiet as some of the best high-line crossovers, even at highway speeds.

Miss those driving sounds? No problem. The infotainment system allows you to choose between several “soundscapes,” simulating a more conventional vehicle’s performance sounds. 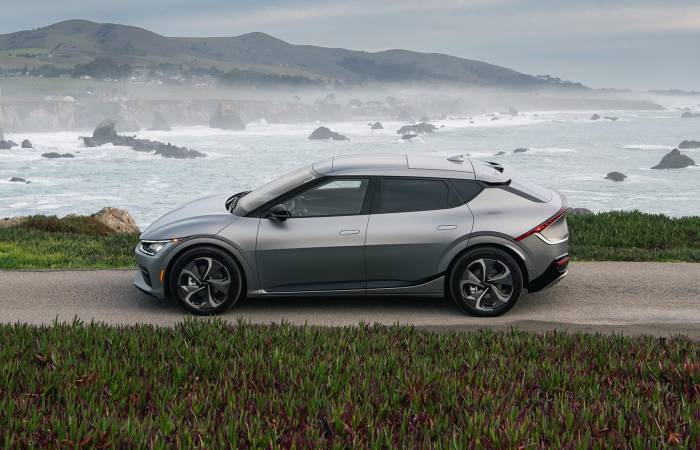 After spending a full day with the 2022 Kia EV6, we found it to be one of the most impressive of the new battery-electric offerings coming to market this year. The crossover is stylish, inside and out.

It’s unexpectedly roomy and offers a raft of appealing features. There’s enough range to satisfy most potential buyers, and performance is even more impressive.

In terms of pricing, the new Kia starts in the heart of the new electric crossover segment. The rear-wheel-drive Light comes in at $40,900 before adding $1,215 in delivery fees. 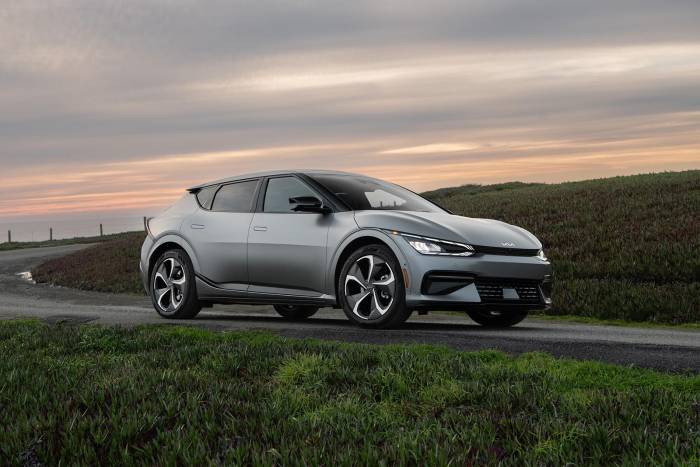 If 2022 really does prove to be the year that battery-electric vehicles start crossing over into the mainstream, the new Kia EV6 is clearly one of the reasons why.