The 2018 Chevy Colorado ZR2 is ready to rock crawl right from the showroom floor. Our contributor took it for an off-road test drive for this review.

Flying through the air, with a full race helmet and HANS Device restricting my head movements, I had to ask myself; how did I get here?

I was in the remote mountains of Western Colorado. More specifically, on a purpose-built, Baja-style racetrack, designed to test and teach driving skills in trophy trucks. But I wasn’t in a souped-up, custom off-road trophy truck. I was testing the Colorado ZR2, a truck you can buy this spring off your local Chevrolet dealer’s lot.

Chevrolet invited me to Colorado to get some seat time in its new performance off-road midsize pickup, the ZR2. It’s an up-fitted version of the Colorado pickup.

The Chevy Colorado takes aim squarely at the Toyota Tacoma TRD Pro. Much like the TRD Pro, the Colorado comes from the factory with significant upgrades.

Given the limited number of midsize pickup options available in the U.S., this one, ready for serious off-road use right from the showroom floor, should raise eyebrows. 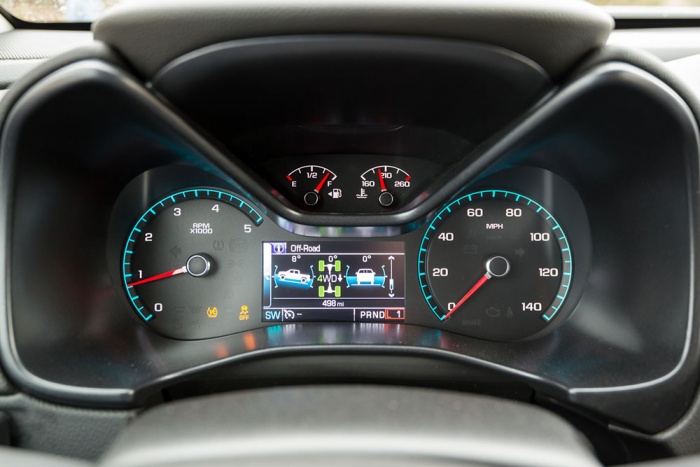 And it looks the part. With aggressive lines and functional upgrades to front and rear bumpers that greatly improve entry and departure angles, it looks downright mean. 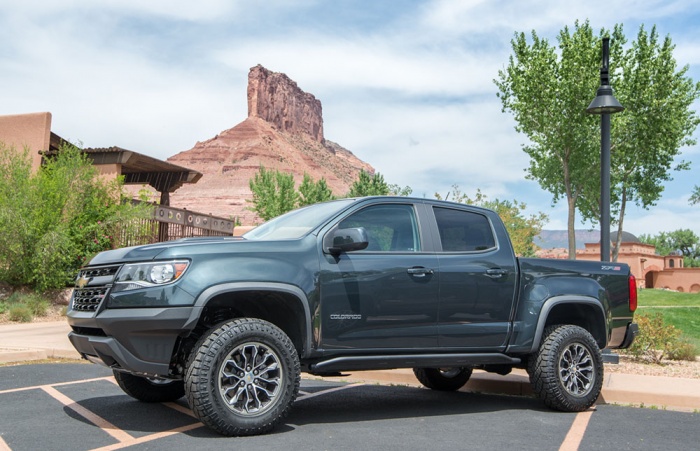 This is a versatile machine though, and in driving, it shined in a WIDE range of off-road situations. And while it really impressed off the tarmac, this truck is snappy and responsive on-road too.

But the one new feature on the ZR2 that sets the truck apart from the competition is the Multimatic DSSV dampers.

The beefed-up truck comes from the factory ready for the double-track and hits the market in spring 2017. Read more…

The DSSV technology was first used by Chevy in the Z/28 Camaro in 2016. It employs spool valves for increased ride and handling performance both on and off road. 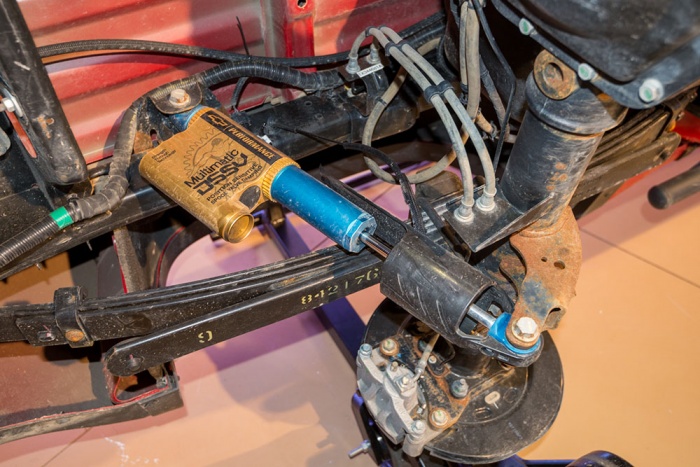 This suspension technology has raised the bar. It works equally well on and off road. It truly shines in tight paved corners and at speed off road.

The DSSV dampers provided smooth, controlled and soft landings off big obstacles at speed. We really did get the truck airborne. The most impressive thing to me was the instant control you had once landing. The truck didn’t bobble and sway like many soft off-road race suspensions. 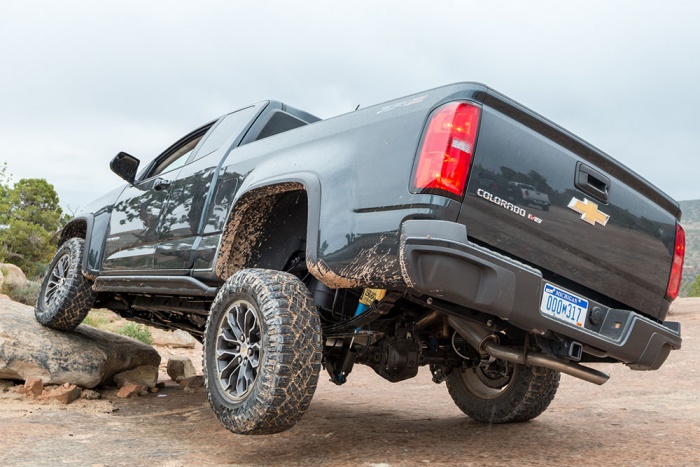 On the trail going slow, the dampers worked well to absorb the harsh hits as you rolled over rocks and obstacles. But it did feel a bit stiff. The key to this suspension tech is that it does all that off road, while also providing a sporty responsive on-road feel not typical in such an off-road-capable truck.

I was able to drive this truck on a high-speed Baja-style off-road course, a typical moderate off-road trail, a rock-crawling area, and on a wide variety of paved roads.

The versatility of this truck is what is most impressive. Its looks lead you to believe it’s a pre-runner style off-road machine, which it is. But it is also an impressive low-speed rock crawler and one of the best-handling on-road trucks I’ve ever driven. 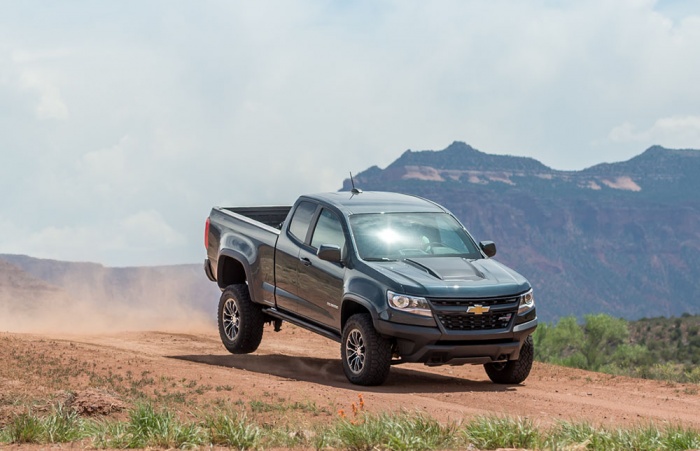 The development team at Chevrolet went to great lengths to make sure this truck is capable over a wide variety of terrain. They tested it in such places as the Rubicon Trail, Hell’s Revenge, Poison Spider Mesa, and the Tail of the Dragon.

Those and many other locations around the country, as well as a variety of specialized test facilities, truly prepared this truck to perform wherever your adventures take you.

There are two big decisions to make when purchasing a ZR2: which engine option and which cab/bed configuration best suit your needs. These configurations also drive price, which begins at about $41,000.

The Most Badass Hydrogen-Powered Pickup Yet

The newly unveiled Colorado ZH2 Fuel Cell pickup is built for the military but made for the wild. Read more…

You can choose between an extended cab (two-door with small suicide back doors) with a 6’2” box or the four-door crew cab with a 5’2” box. 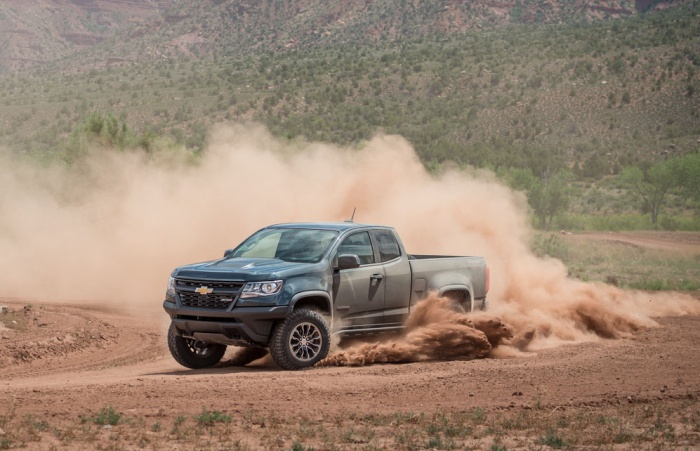 I’d probably purchase this truck in the extended cab 6’2” bed configuration with the Duramax diesel. That would allow me to sleep in the bed of the truck, haul more outdoor gear, and set me back a little over $45,000, with nearly all the options boxes checked. I’d probably also get the rubber floor option instead of the standard carpet, as it is incredibly easy to clean and provides more sound and temperature insulation.

The 1,100-lb. load capacity and 5,000-lb. towing capacity of the ZR2 best the competition and provide plenty of capability to haul loads of adventure gear. I found the build quality to be exceptional throughout the vehicle, with the body, bed, and frame being an incredibly solid unit — very little flex. The interior is surprisingly well-designed with quality materials throughout. You even get heated leather seats as standard on the ZR2.

The new ZR2 is sure to be a top contender in the U.S. midsize pickup market. But it isn’t perfect. I found a few of the ergonomics to be a bit off.

There really isn’t much of a dead pedal. This leaves you constantly searching for a comfortable place for your left foot. I also found the front seats to be a bit flat in the lower cushion, with not much leg support, especially without an angle adjustment option on the lower seat. 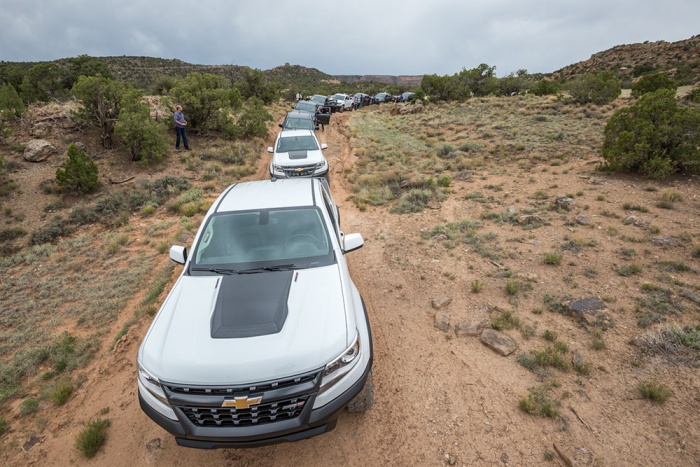 While off-road driving, I found it difficult to figure out exactly where the front corners of the vehicle were, due to the aggressively sloped hood. Some of the computer functions on the ZR2 also seem a bit slow, as it takes a few seconds to engage/disengage 4wd low, and for the descent control to engage once you’ve started rolling down a hill.

It was impressive to watch the trucks go unfazed as all manner of journalist thoroughly thrash on Chevrolet’s demo fleet. The attention to detail, like the incredibly comfortable door and center armrests, make a good truck on paper into a truly great pickup.

If you’re looking for a new way to get you and your gear to that remote adventure, while also having a great daily driver, I’d suggest taking a hard look at the new Chevy Colorado ZR2.

Up Next: 9 Camper Builders Make Your Van Life Dreams Reality