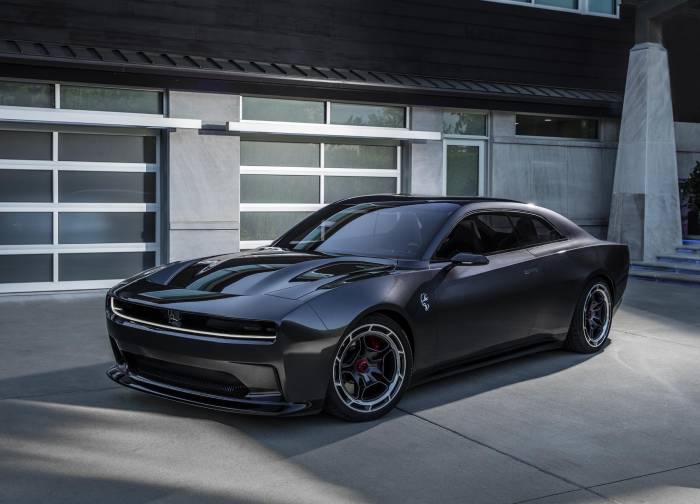 With its classic Charger and Challenger muscle cars set to go out of production at the end of the 2023 model year, Dodge will have a big void to fill.

But the brand isn’t getting out of the performance business. It’s just changing the way it will deliver the numbers. The new Dodge Charger Daytona SRT concept offers a hint of what’s coming as it trades its traditional V-8 for battery-electric power.

A deep, guttural roar erupts from a room off to the side of the Stellantis design dome in Auburn Hills, Mich. To fans of classic muscle cars, it’s music to the ears and, in years past, would have signaled the rollout of the latest Dodge muscle car. But the performance car brand is pulling the plug on the familiar Dodge Charger and Challenger models next year.

So, it left the crowd of journalists gathered for a brand background briefing slack-jawed as the Dodge Charger Daytona SRT concept rolled onto the floor. A thinly disguised prototype of the production model due out in 2024, the Daytona’s “Fratzonic chambered exhaust” produces the same menacing rumble as the familiar Hellcat engine. And that’s just one of the surprises that will come with the first all-electric Dodge muscle car.

When the production coupe arrives in barely 2 years, it initially will offer three distinct performance levels. But owners will be able to digitally unlock up to nine using over-the-air update technology, officials have revealed. And to add to the classic muscle car feel, the production model will become one of the only all-electric vehicles to feature a multispeed transmission.

“Dodge is about muscle, attitude and performance, and the brand carries that chip on its shoulder and into the BEV segment through a concept loaded with patents, innovations, and performance features that embody the electrified muscle of tomorrow,” said Dodge brand boss Tim Kuniskis.

During the background session last week, Kuniskis acknowledged that Dodge found itself in a tough position a few years ago. While there are still loyal buyers for the Charger sedan and Challenger coupe, demand has been steadily sliding.

“Nobody wants cars anymore,” he said, adding, “As fast as the flip to utility vehicles happened, something even faster was coming, the flip to electrification.”

The 2023 model year will see Dodge introduce its first battery-based model, the new compact Hornet crossover offered with a plug-in hybrid drivetrain on the more expensive R/T package. But with it now time to replace the long-in-the-tooth Charger and Challenger models, brand officials decided it was time to take a real risk.

The Charger Daytona SRT shows what’s coming. Officially, it’s just a concept vehicle, but Kuniskis and other officials all but confirmed that what you see is pretty much what you’ll get in 2024.

“This is not a science project,” said Kuniskis. “Some concept cars are. This is not.”

The all-electric muscle car picks up on a number of classic Dodge design cues, though they’re blended with some decidedly modern features. The long nose is a paean to the legendary Dodge Daytona hatchback, for one thing. And while the outgoing Charger is a sedan, the concept returns to the nameplate’s two-door past.

“There’s a brutality” to the appearance, suggested designer Jeff Gale.

There’s also the front “R-wing” that adds a classic touch while balancing both high-speed handling and range-extending aerodynamics. And with the battery pack and motors mounted below the load floor, the Daytona’s wheels have been moved further out to the corners than any previous Dodge model. Then add the all-new Banshee fender badges that will be used for future, all-electric Dodge muscle cars.

Though the Daytona has a 25% lower aerodynamic drag than the current Charger, “This is no melted jellybean,” like so many modern EVs, suggested Kuniskis. “It looks like a true muscle car.”

That carries over to the inside. Yes, there are the requisite LCD screens, a fully digital gauge cluster, and a massive infotainment touchscreen. You can even add a large head-up display.

Among the trick touches, a jet-style cover pops up to reveal the Daytona’s “Launch” ignition button. And it gets a pistol grip shifter. And that’s one of the places where the all-electric coupe really distinguishes itself.

Specs TBD, But Expect It to Be Quick

Dodge officials are being coy when it comes to drivetrain specifics. They’ve hinted that the production model will offer multiple motor configurations and at least two different battery pack options. The Daytona concept is all-wheel-drive, and that appears to be where all future versions of the production car go, as well.

If nothing else, electric motors can churn out gobs of horsepower and torque. The Tesla Model S Plaid and the Lucid Air Dream Performance edition both make more than 1,000 horsepower and can launch from 0 to 60 in barely 2 seconds.

Kuniskis sidestepped repeated questions about the Daytona’s numbers, though he cautioned that Dodge won’t necessarily aim to be the fastest off the line, at least not when the light changes. Running the quarter-mile could be another matter.

Significantly, he indicated the Daytona will be “track-ready,” meaning it will deliver peak power lap after lap, unlike many current EVs that quickly start to wheeze.

Up to 9 Power Levels

Daytona also features a new PowerShot button — much the same as found on the new Hornet R/T. Press it and you get an immediate, albeit short, burst of additional power for passing, whether on the street or the track.

Initially, the production Daytona will be available with three factory power levels. But buyers will then be able to order from a total of nine through Dodge’s Direct Connection web service. They’ll be automatically downloaded using the muscle coupe’s over-the-air update technology.

“It’s all about the driving experience,” the brand boss told GearJunkie after the formal preview ended. And Dodge is adding several unique features to enhance that experience.

An EV With an Exhaust and a Multispeed Gearbox

That starts the moment you hit the Launch button, the Daytona responding with a Hellcat-like 126-decibel roar.

“While most BEVs embrace their virtually silent electric motors, that just wouldn’t do for Dodge,” the automaker said in a statement describing the unusual system.

And it’s paired with the Daytona’s eRupt Transmission. With rare exception — notably the all-electric Porsche Taycan — EVs rely on single-speed gearboxes. While electric motors can handle top revs that even Formula One teams would envy, this will enhance performance and also help improve energy efficiency, according to Dodge engineers.

It also adds the visceral punch muscle car fans are accustomed to, added Kuniskis, noting that eRupt technology will carry over into production.

More to Come, Including Pricing

While Dodge is being circumspect when it comes to powertrain details, the brand chief did note that the Charger Daytona will initially use a 400-volt electrical architecture. But it will add an upgraded 800-volt option that, he indicated, will improve both performance and charging speeds. It’s not clear how long after launch the upgrade will be introduced.

The precise timing of the production Charger Daytona has yet to be revealed, along with pricing. But it should show up in Dodge showrooms before the end of 2024. Pricing, said Kuniskis, is “TBD.”