I’m bombing down a hill, hands gripped for dear life. The ground rushes past, mere inches beneath my seat. Then, against instinct, I crank the bars hard left, expecting the worst. 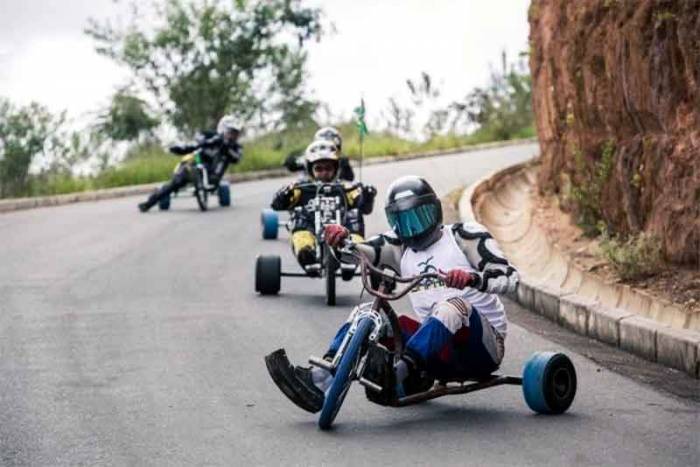 Instead of launching from the cockpit I’m still rushing down the pavement, spinning effortlessly and endlessly – spinning like a top. I feel like Mario on his famous video game go-kart, skidding on a banana peel.

Traction from my rear wheels is nonexistent, yet with a slight turn of the handlebars I’m controlling the drift, twisting and turning down the rest of the hill.

The Dynacraft Black Ice eDrifter I was riding is a three-wheel craft designed to “drift” (skid and spin) a full 360 degrees or more. Imagine riding a go-kart onto oily pavement and turning as hard as you can. You can skid through turns and spin, but the rear wheels are wide enough that there is no real chance of flipping.

The “sport” got its start in the ’70s when California thrill-seekers outfitted the plastic rear wheels from children’s trikes onto a custom steel frame with a 20″ front bicycle wheel. It since resurged when Trek made a sturdier children’s trike called the MOD in 2008, which Nitro Circus star Travis Pastrana took a liking to and began using for stunts (including a 40-plus-foot mega-ramp backflip). 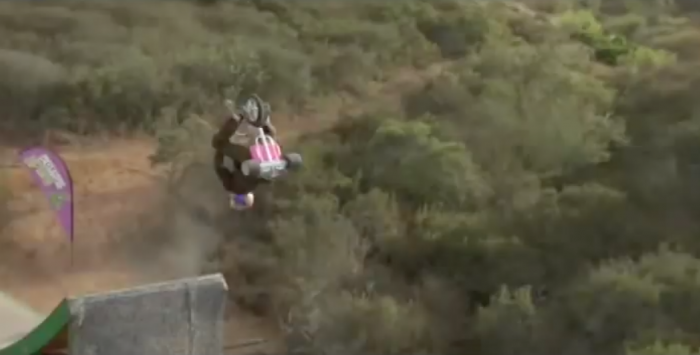 From there, New Zealanders began covering the rear wheels of the toy with PVC piping, providing a slicker surface that allowed for downhill drifting. Pure genius.

And so, thanks to Travis Pastrana and some thrill-seeking Kiwis, tricycles were no longer just for children.

Devin Super Tramp, a YouTube videographer, released a viral video in 2012 that featured drift trike riders being pulled by a vehicle to reach top speed before pulling off some serious downhill drifts. Every kid and adult in America wanted to participate in the drift trike craze.

Red Bull, known for its outstanding (and often wacky) sponsored events, drank the Kool-Aid. In 2014, the first Red Bull Trike Strike was held in Brazil, where contestants raced modified Big Wheels down an iconic hill near Belo Horizonte, reaching speeds over 50 mph.

Scootin’ around on a trike.

Local drift trike events are still held all over the States today. For 16 years now, the Bring Your Own Big Wheel event has been held in San Francisco, Calif., originally down the famous Lombard Street, and now along Vermont and 20th streets (supposedly even curvier). The event draws hundreds of participants and is hilarious to watch.

Today, motorized and electronic drift trikes are replacing DIY models. With a motor or battery, you can drift endlessly without a hill or the help of a car. You can throttle uphill, too.

We gave the Dynacraft Black Ice eDrifter a try this month, bringing in some youth and adult testers to whirl and twirl up and down the nearby Greenway pedestrian trail. We also tested its limits down a steep hill.

The 24V battery gives the unit enough juice to get up to speed and crank out 360s on flat ground. The tires are tubeless, and the accompanying “drift rings,” smooth, hard plastic covers that fit over the rear tires, provide serious drifting action.

The electronic trike is heavy, 60 pounds, and tops out at 12.5 mph on flat ground. Though fun for adults, we found it to also really captivates teens and kids, allowing them to drift with ease and safety.

Drift triking is certainly a niche sport and undeniably fun, as a spectator and participant. Though hopping on a three-wheeler may seem kiddish at first, you’ll quickly find yourself lost in the singular joy of a 720-degree drift.

Up Next: A Little Too Visionary? The 1963 Scout Camper