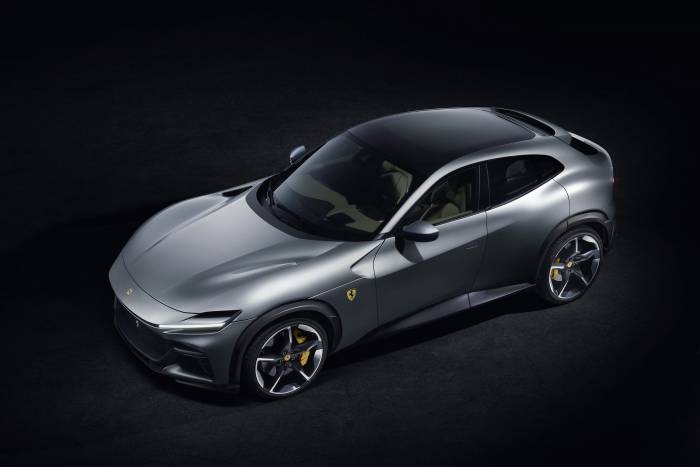 Ferrari is the last to give in. The Purosangue is its first four-door vehicle, and it comes with a big-ol’ naturally aspirated V12 under its long hood.

The Prancing Horse with a carriage is finally here. Just 5 years after Ferrari’s then-CEO said that an SUV wouldn’t happen, it has. This is the Purosangue, the first-ever four-door SUV/CUV from Ferrari. Equipped with a massive naturally aspirated V12, it’s a waving middle finger at those who think a sports car brand should never go big.

The name means Pureblood, and that hits differently when it comes to a vehicle like nothing the automaker has ever built. It’s not the first four-seater, but it is definitely the first Ferrari with four doors. The brand calls it “an authentic Ferrari four-door sports car,” which well, feels like a stretch.

Ok, that’s enough pearl-clutching and grumbling for the past. Ferrari is a company, not a legend, so it can do what it wants. On to the hardware.

The hardware starts with a 6.5L naturally aspirated V12 engine. It makes 715 horsepower, putting it ahead of competitors like the Aston Martin DBX 707 and Lamborghini Urus Performante.

It should also produce a sound unlike anything those two could ever dream of, and keep it going through 8,250 rpm. A true Ferrari if ever there was one, the engine is placed as far back as possible. Ferrari calls it a mid-front-engine design.

An eight-speed transmission hides in the rear of the Purosangue. The dual-clutch box has a smaller clutch and a dry-sump oiling system to help shrink it in size. It’s faster to shift than Ferrari’s old seven-speed DCT, and is programmed for “emphasizing the sound of the new V12.” OK, then!

Ferrari designed the chassis for the Purosangue from scratch, it says. The choice helped keep weight down versus adapting from another car. Ferrari says the chassis is lighter than that of its old 2+2 cars. It also made the rear-hinged back doors possible. Yes, the first four-door Ferrari has suicide doors!

Cutting even more from the curb weight is a carbon fiber roof with integrated soundproofing. Ferrari says it’s 20% lighter than aluminum. Strangely, for an SUV, Ferrari says it has worked to keep the driver on the floor as in a traditional sports car. This is instead of elevating them for better visibility, a big reason many buy an SUV or CUV.

Styling cues bring it in line with other Ferrari 2+2 models, just taller. The rear end isn’t far off of the Ferrari FF, one of the last 2+2 V12 coupes, and the first Ferrari hatchback. The hood is much more like the Monza SP1 and SP2 ultra-limited production models. Like those cars, the hood hinge is located at the front and not the rear.

Dynamics were key to Ferrari’s development of the Purosangue. To make sure the company hit its targets, the model got an all-new suspension. True Active Spool Valve System from Multimatic, which combine the company’s near-magic spool valve shocks with adaptive damping to allow even more adjustability.

It will have some off-road capability, though. The Purosangue is the first Ferrari to get Hill Descent Control, to slow the vehicle when crawling down hills off-road. It will also have an all-wheel drive system Ferrari refers to as 4×4.

Thanks to the V12 and all-wheel drive, Purosangue will be able to hit 62 mph in 3.3 seconds and run to a top speed of 193 mph. That should make it one of — if not the— quickest SUVs on the market.

The cabin should also be suitably comfortable for everyday duties. Ferrari calls it “an extremely elegant, sporty lounge.”

Trimmings include impressive use of sustainable materials including a recycled polyester roof lining, recycled fishing net carpeting, and a new Alcantara material made from recycled plastic. Ferrari claims it’s the first car on the market to use that last one.

It’ll be a while before you see a Purosangue on the road. It’s expected to go on sale late next year. Unfortunately, unlike some of its competition, there’s no word on towing. Too bad, since towing your Daytona to the track with one of these would be pretty dang cool.

Also no word on pricing just yet, but initial estimates put it around $400,000. That’s a lot of coin, but there is little doubt that Ferrari will sell this in high volumes, at least for a supercar manufacturer.

Other sports car manufacturers have survived by making SUVs, and Ferrari is hoping to do the same, bolstering its bottom line with the Purosangue. 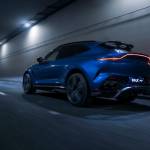 Behind the Wheel of 'The World’s Most Powerful Luxury SUV': Aston Martin DBX707 Review

Aston Martin's DBX model is already the brand’s bestseller. Aston is taking things to new extremes with the ultimate version of that crossover, the DBX707. Read more…