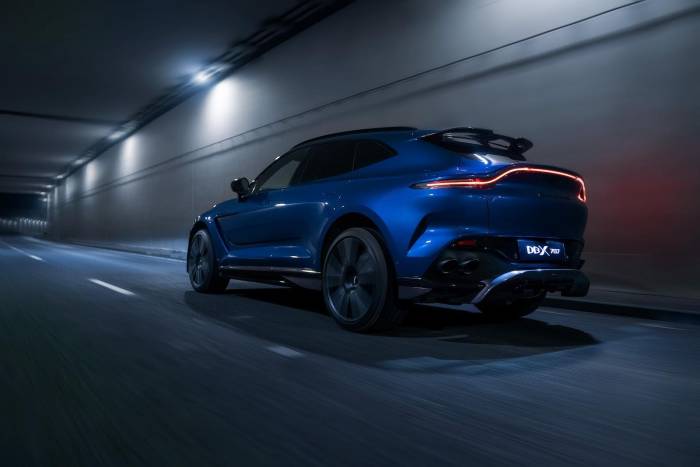 Sure, Aston Martin still offers an assortment of classic sports cars and grand tourers. But the British automaker has clearly read the Earl Grey tea leaves and realizes that, even in the most exotic reaches of the automotive world, SUVs are taking over.

Indeed, its DBX model is already the brand’s bestseller. And now, Aston is taking things to new extremes with the ultimate version of that crossover, the DBX707.

It’s a little early in the year by Sardinian standards. And that’s the best news of the day, considering the narrow, serpentine roads hugging the island’s coast aren’t yet filled with tourists creeping along while staring at the dazzling scenery. My own eyes are focused on the worn pavement as I push the new Aston Martin DBX707 to its limits. Or, at least try to. 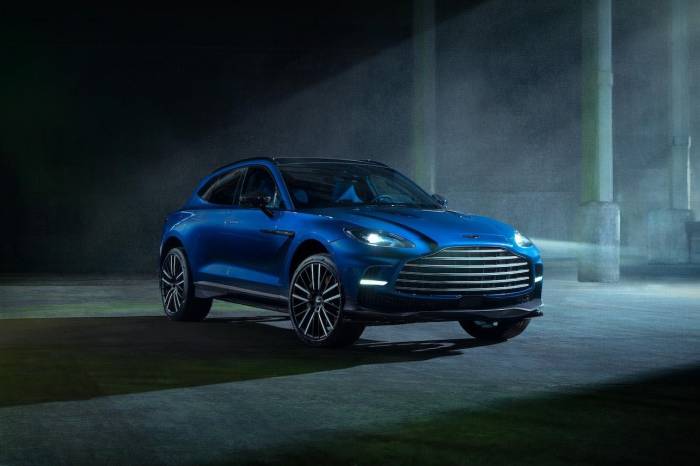 Even the “base” version of the DBX — if you can use that term for a vehicle starting at $192,086 — has been winning converts among Aston aficionados. At $239,086, including delivery fees, the DBX707 is another matter entirely from a performance and handling perspective.

Admittedly, I was one of the skeptics when former CEO Andy Palmer announced plans to build the century-old automaker’s first SUV. But it was an inevitable decision considering where the industry has been shifting.

Bentley, Lamborghini, and Rolls-Royce all are now in the utility vehicle market, and even Ferrari and Lotus are set to follow. The challenge, as Palmer’s successor, Tobias Moers, put it, was coming up with a product that would maintain “Aston Martin’s dynamic and design values.”

DBX’s styling lives up to those expectations, with a look that is sensually aggressive. The nose, with its oversized Aston grille, cants forward ever so slightly. The sweeping arc of the roofline gives the DBX an arrow-like appearance as it races down the road. 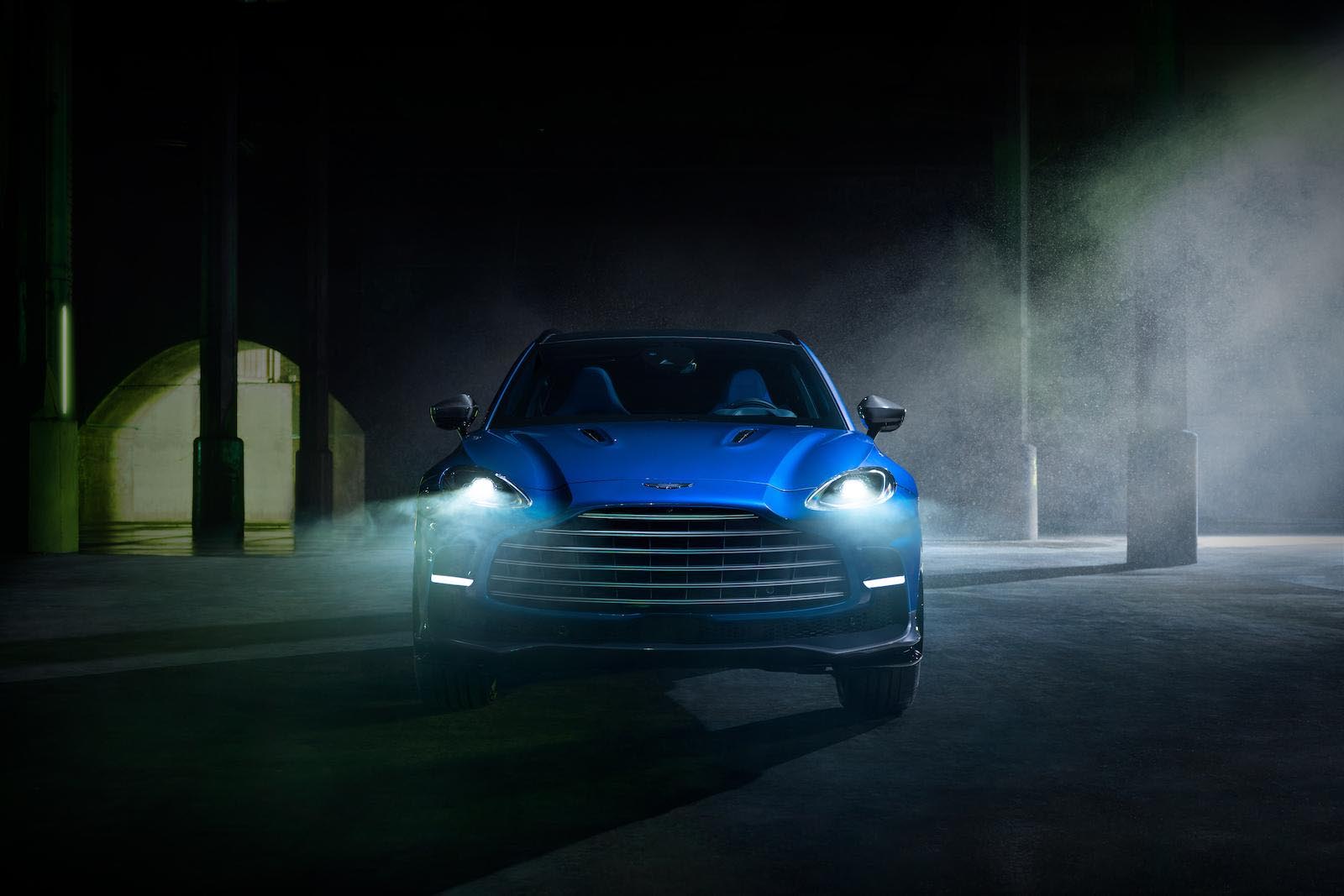 The new model gets an even larger grille with new daytime running lights, as well as bigger air intakes and a front splitter. Most of the changes — including new corner spats, an anti-lift spoiler, and twin rear diffusers — are functional, designed to minimize drag while increasing high-speed downforce.

This is the biggest vehicle Aston has ever assembled, the 707 hewing close to the base SUV’s dimensions. It stretches 198.4 inches in length and 78.7 inches in width, with a wheelbase of 120.5 inches. It stands 66.1 inches tall and tips the scales at 5,148 pounds. 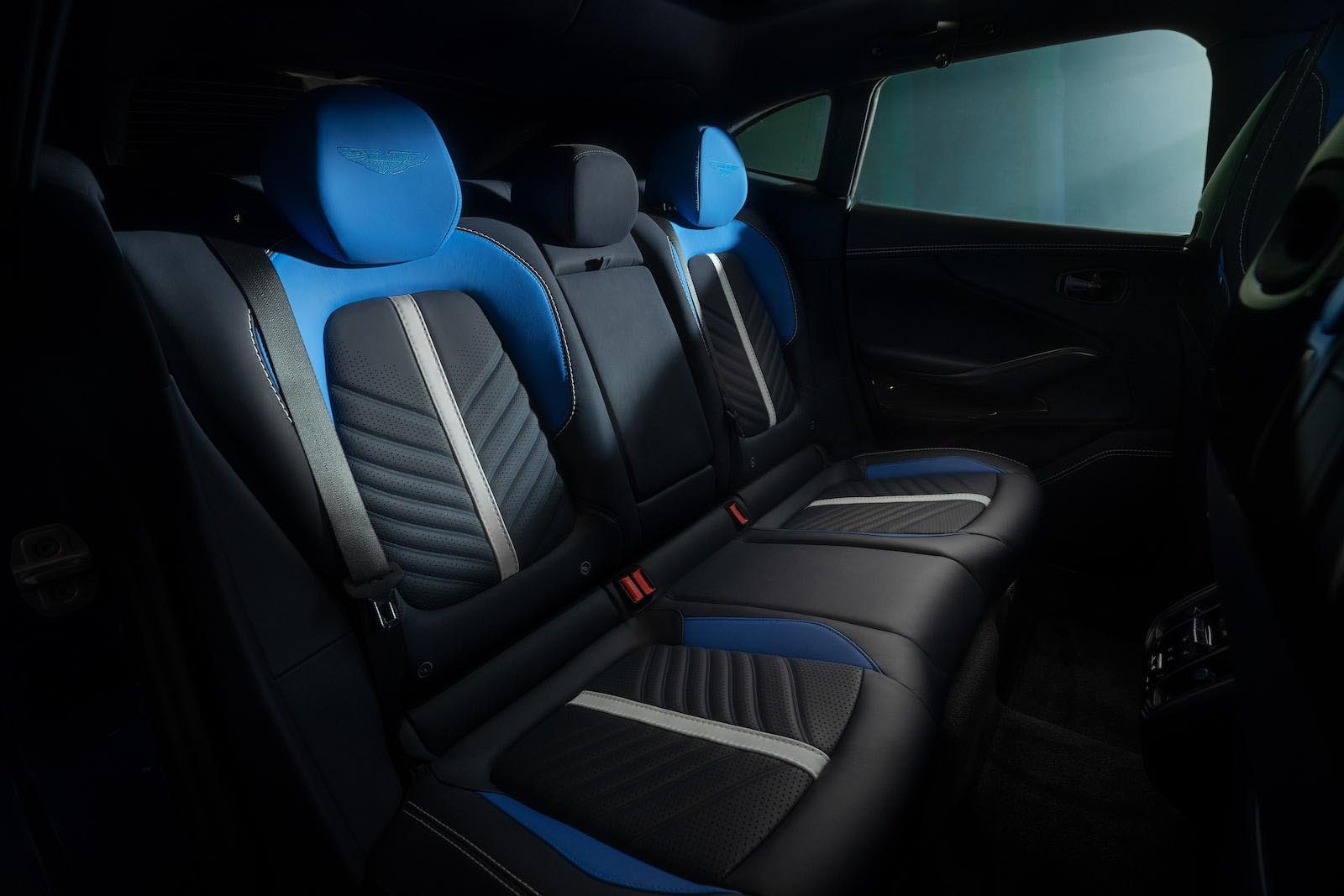 From a passenger’s perspective, that’s good news. It’s easy to clamber in and out of the DBX, and once inside you’ll discover plenty of head, shoulder, and legroom, front and back. There’s even 22.3 cubic feet of cargo space — 54.0 cubic feet with the rear seats folded down. 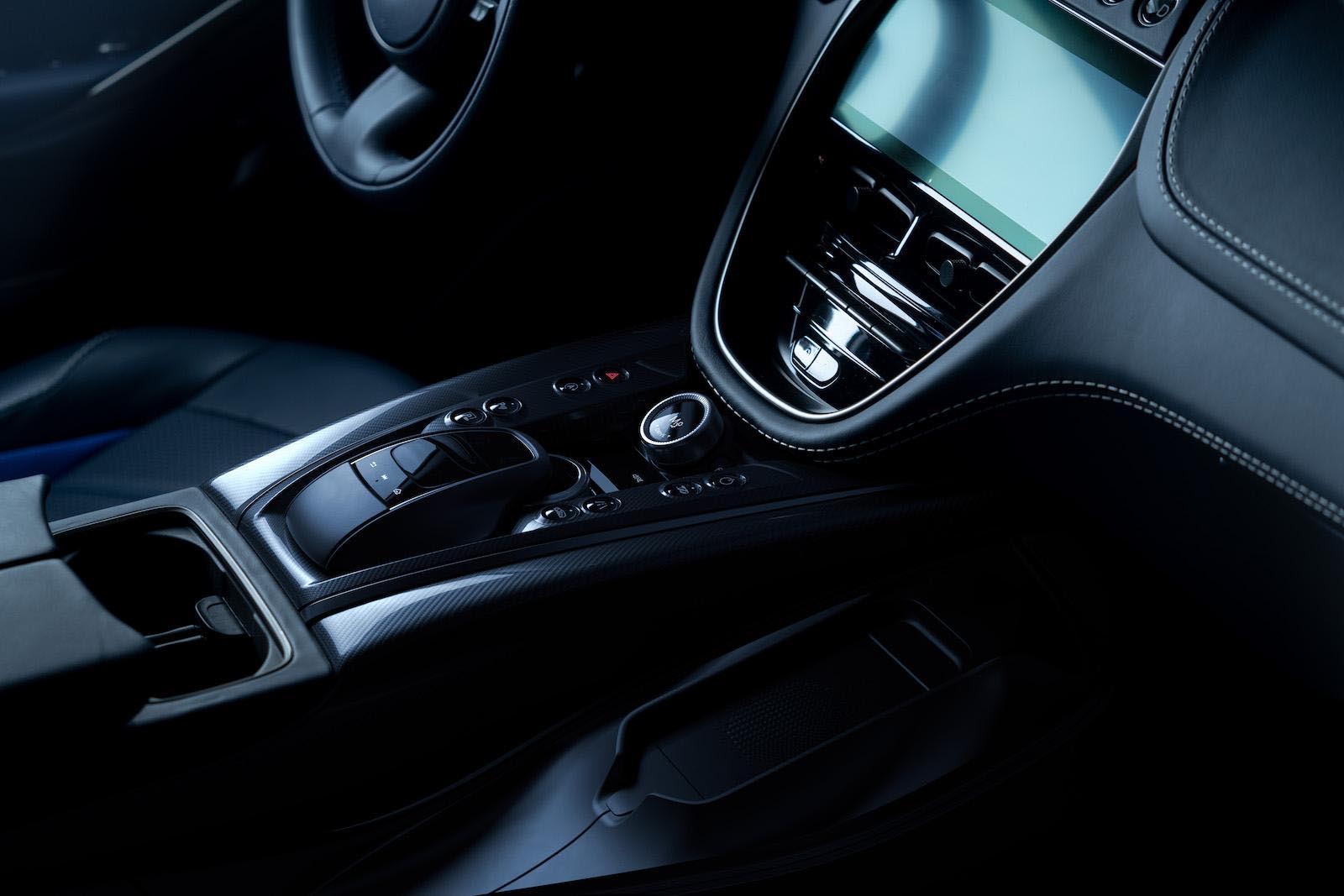 The seats have been upgraded, meaning 16-way power controls for the driver. More importantly, there’s plenty of additional bolstering — which I quickly come to appreciate as we bob and weave along the coastal highlands.

There are plenty of other high-tech features onboard, including an array of advanced driver assistance systems. But what’s most compelling is the way Aston has used technology to overcome the physics of a big SUV.

There’s a height-adjustable suspension using triple-chamber air springs. You can tap a button to increase ground clearance, but the system also operates automatically — and intuitively — lowering the DBX707 as much as 3 inches when you reach 124 mph. Add to that an active anti-roll system that lets you fly through even the sharpest corners with barely a hint of tilt. 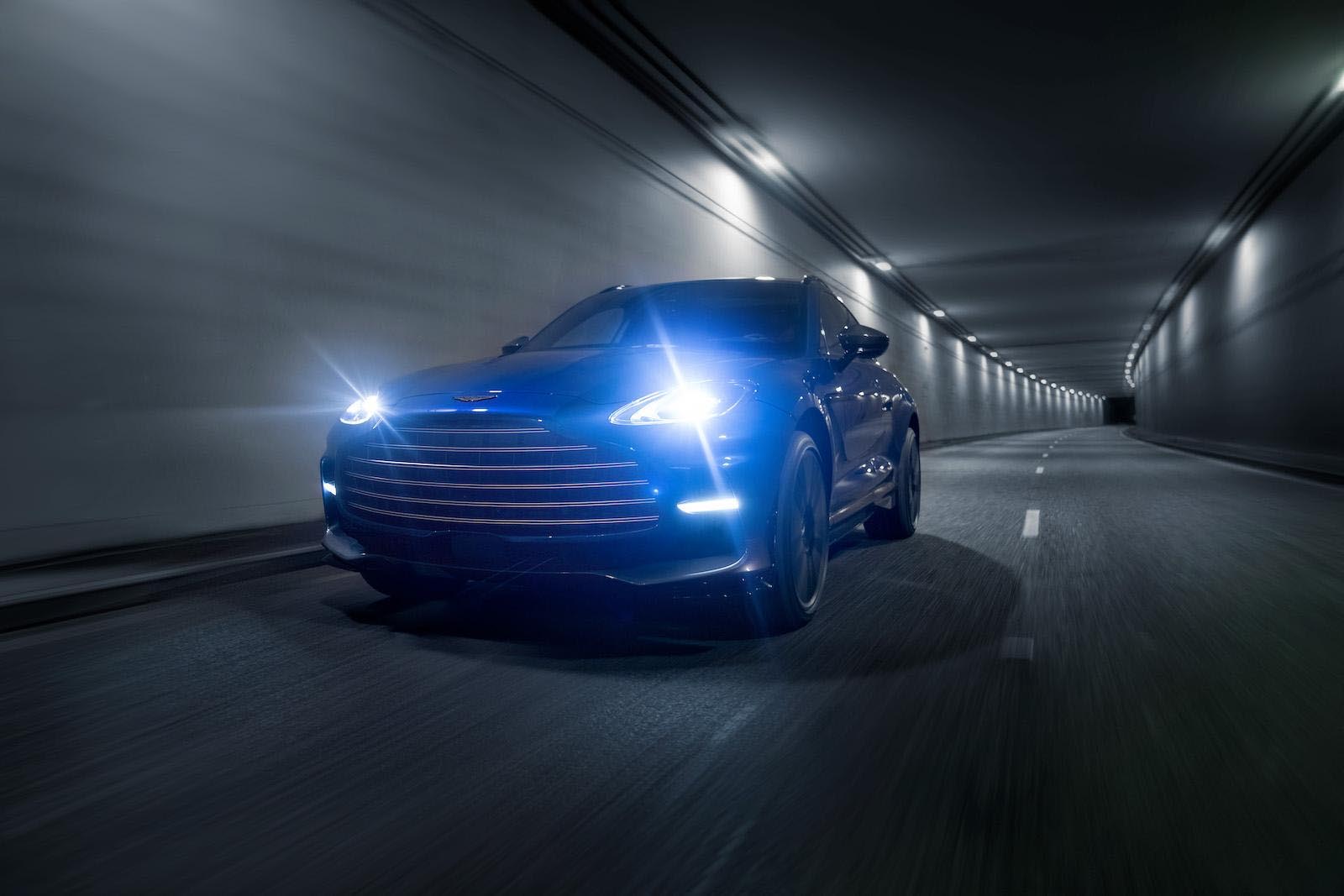 Of course, it’s the powertrain that makes the DBX707 special. Aston bills it as “the world’s most powerful luxury sport-utility vehicle,” but the claim is a bit misleading. Technically, the new Tesla Model X Plaid delivers higher numbers, at a rated 1,020 horsepower. But, it’s just not part of the same world, so we’ll leave Aston’s claim standing — along with an asterisk.

Surprisingly, Aston was able to squeeze out more power from the existing 4.0L twin-turbocharged V-8 without a complete tear-up. It uses refinements such as new ball bearing turbos and a revised engine calibration to “liberate more power and torque.”

It does get a new single-piece carbon-fiber driveshaft, as well as a nine-speed wet-clutch automatic to help handle the added torque. The combination is impressive.

An active center differential helps push torque where it’s needed most. That can mean as much as 100% going to the rear wheels in ideal situations, or under more slippery conditions, a maximum 50% of torque to the front axle. 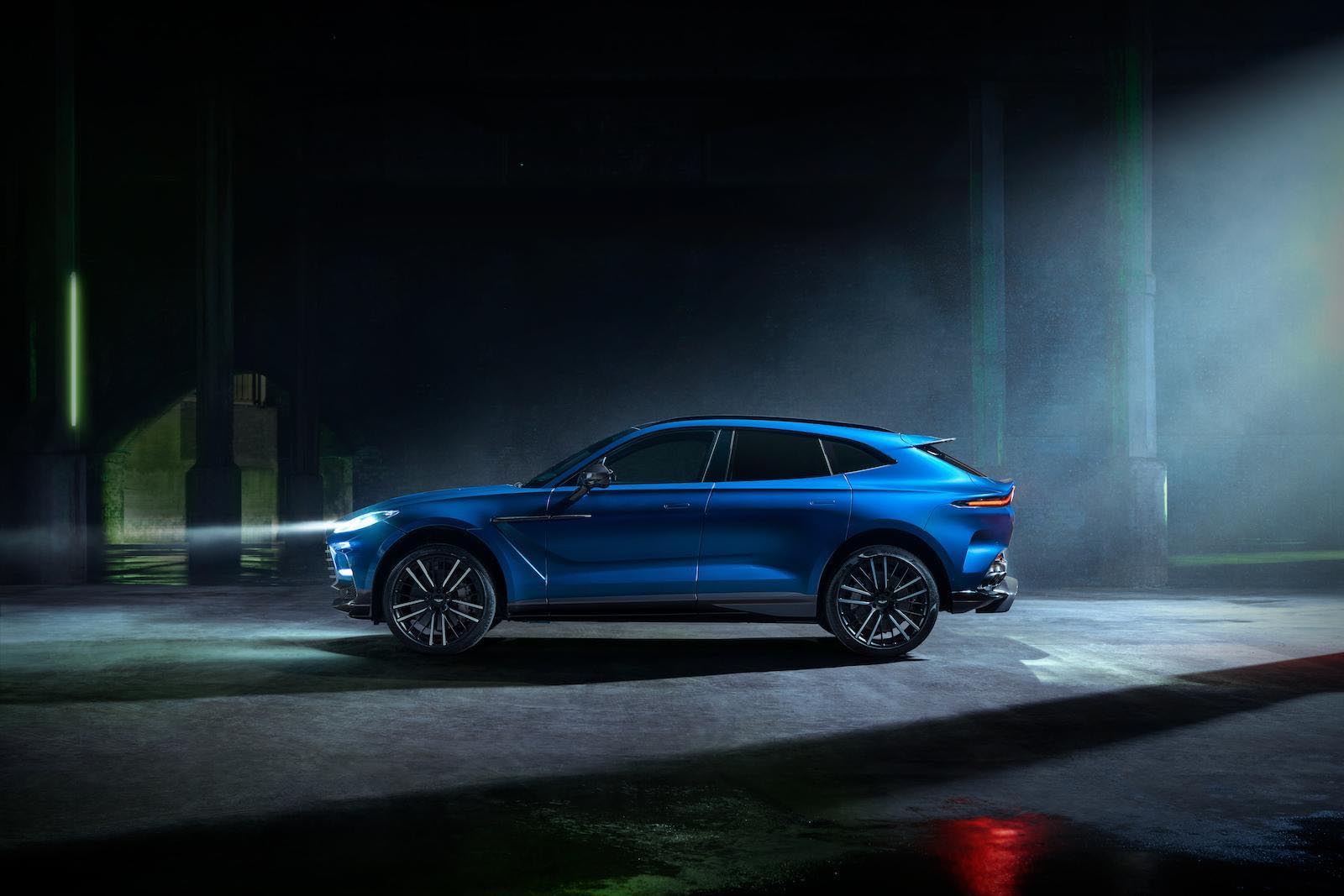 The 707’s engine connected almost intuitively to my right foot. So did the brake pedal, something quite critical to surviving a high-speed run around the Sardinian coast’s high cliffs.

The crossover features 16.5 inches of brake rotor up front and 15.4 inches in the rear, both front and back featuring six-piston calipers. Other revisions to the braking system helped Aston engineers cull an impressive 90 pounds of mass, while keeping the ceramic discs cooler under the hardest of braking conditions.

Most buyers would likely find the base crossover more than sufficient for their driving skills and real-world needs. And, as you’d expect, there are a few things to grumble about, like the lack of a rear windshield wiper.

But for those who want the ultimate in luxury features paired with extreme levels of performance and handling, the 2023 Aston Martin DBX707 delivers just about everything you could hope for.

Virtually build out and/or schedule a meeting with your local Aston Martin dealer.