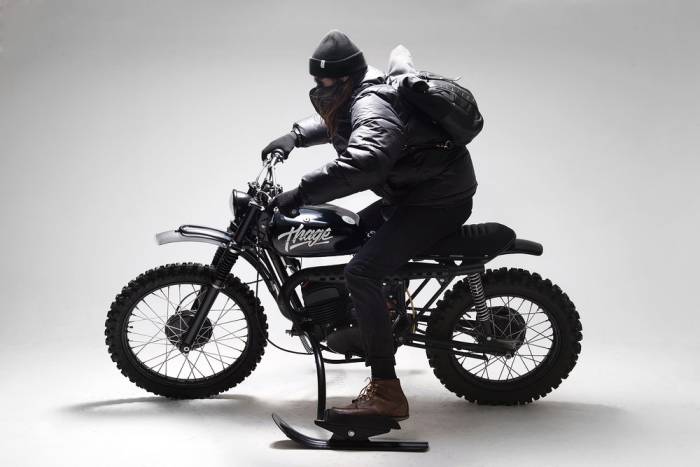 Sweet, or sketchy? Nearly a half-century old, this motorcycle once carried Swedish troops over rocky terrain and icy slopes. Now you can own it, but mastering it will take some practice.

In 1968, the Swedish Army bought 1,000 Husqvarna motorcycles. Why? Because they LOVED one if its unique accessories: skis.

Almost 50 years later, a one-of-a-kind restoration is up for grabs, thanks to Stockholm’s own 6/5/4 Motors. Shop owner, Johan Nordin, branded the build “Thage” after his father, who served in the military and rode the original.

This Husqvarna 256 blends modern tech and aesthetics with the original design quirks.

In ski mode, the spring-loaded outrigger skis stay elevated unless pushed down. Yes, that means that you have to keep your feet on the skis while you throttle, shift, and brake using only your hands.

Here’s how it works. A gear lever on the right side controls the four-speed gearbox, and the front brake can be disconnected and re-routed to the rear. So you throttle, clutch with the left, shift with the right, and throttle back again.

The 256 is really a purist’s ski-cycle. Not only are modern motorcycles’ snow conversions — like Timbersled that ditches wheels altogether — remarkably effective, but the 256’s own successor received an automatic gearbox. Presumably, soldiers’ hands (and brains) were exhausted with the manual-shifting design.

As for performance, the 256cc two-stroke engine cranks out 15.4 horsepower. We’d love to test it, but since these bikes are less common than white rhinos, that probably won’t happen. For those serious about acquiring this vintage beauty, send a message to Sweden, and cross your fingers. We’re guessing this one won’t last long.