Lamborghini has lived, laughed, and loved with the V12 engine since 1963. That love affair isn’t set to end, but it’s going to change very soon. Before it does, let’s look back at the history of the Lamborghini V12.

At the start of the 1960s, tractor-maker Ferruccio Lamborghini set out to build a sports car that could beat Ferrari. Not on the track, though. On the road. The businessman was tired of sports cars he thought were quick, yet had no business being used every day.

He snagged a big win when he asked Società Autostar to design the engine for his first car. Lamborghini wanted a V12 and the company he commissioned was owned by Giotto Bizzarrini. The very same engineer who had designed the Ferrari V12 engines Lamborghini wanted to best.

Bizzarrini’s new V12 was ready for the Lamborghini 350 GTV, a concept car that made its first appearance at the 1963 Turin Auto Show. The next year it went into production, under the long hood of the 350 GT.

In the 350 GT, the four-cam (Ferrari only had two at the time) Bizzarrini engine made 270 horsepower. That was enough to push the car to 158 mph. Thanks to an aluminum block, heads, and pistons, it only weighed 511 pounds.

“The Lamborghini story was born with the V12,” said Maurizio Reggiani, former chief technical officer at Lamborghini. “It is clear that in the 1960s, the V12 represented the pinnacle of technology, luxury, and sportiness of every car.”

When the Miura came along in 1966, it marked the origin of the supercar. Lamborghini took the same V12, rotated it 90 degrees, and stuffed it behind the driver instead of in the front.

For the Miura, Lamborghini increased the engine’s displacement. Now it was 3.9 L and made 345 horsepower. Later, Miura 400S and P400 SV models boosted power even higher, first to 365 horsepower and then to 380. That same year, the 350 GT got a new engine (still mounted in the front) and became the 400 GT.

It would go on to be used in the Espada, Islero, and Jarama — all front-engine grand tourers.

When the Lamborghini Countach came along in 1971, it used the same V12. But this time it was turned another 90 degrees, so now the flywheel pointed forward. The transmission was mounted between the engine and the driver, with a drive shaft running back through the oil sump to the rear.

In 1986, Lamborghini took the latest V12 and took it off road. The LM002 (also called the Rambo Lambo) was a failed attempt at a military vehicle and a not-exactly-successful attempt at an SUV. The LM002 saw the 5.2L V12 placed in the front driving all four wheels. Rather short-lived, just 328 were produced over 7 years.

The Countach was replaced by the Diablo in 1990, but after nearly 30 years the Bizzarrini V12 wasn’t ready to be put out to pasture just yet. For the Diablo displacement grew again, to 5.7 L. The power levels grew as well, to 485 horsepower and 428 pound-feet of torque. By the end of the Diablo’s run in 2001, it displaced 6.0 L and made 575 horsepower.

In 2001, the Lamborghini Murciélago arrived, but even though the company’s V12 had been working long enough to collect a pension, the car company wasn’t done with it.

Serious internal changes saw the engine grow just slightly from 6.2 to 6.5 L, but power was way up. The V12 made 661 horsepower, and upgrades like a dry sump oil system helped lower the car for better handling.

In 2011, the Bizzarrini V12 finally got a break. The Lamborghini Aventador arrived and it had an all-new V12. The clean-sheet design was lighter and vastly more modern, starting with 6.5 L and 690 horsepower. The beating heart of Lamborghini was stronger than ever.

What’s Next for the Lambo V12?

With incredibly tough new emissions laws and a new Lamborghini flagship coming soon, is this the end of the company’s relationship with the V12? Absolutely not.

The Aventador was the last Lamborghini to get a naturally aspirated and unassisted version of the V12 engine. But Lamborghini said it’s about to turn to a new chapter. One where the V12 is backed by a hybrid system that will hopefully keep the raging bulls screaming for at least another decade.

The company has already given us a preview of what’s possible with the Aventador-based Sián FKP 37 and Countach LPI 800-4. When the company ran out of ways to increase power from its V12, it fitted a small electric motor. A supercapacitor instead of a traditional hybrid battery supplied the juice and instead of 770 horsepower, the Countach LPI 800-4 makes 803. The Sián produces 808 horsepower, showing the potential of 12 cylinders and electric power combined. 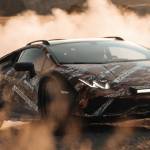