Home » Motors » First Look: MoonShade Is a Temporary Awning for Your Adventure Rig

The MoonShade Portable Awning is a light and packable awning for overlanding vehicles and more.

Awnings for overlanding vehicles can be big, expensive, complicated, and, most permanently, mounted to the vehicle, where they can negatively impact mileage. Moon Fabrications created a tent-like design to solve these issues and expand flexibility.

The San Francisco brand launched its MoonShade on Kickstarter, and we got our hands on a preproduction sample for this first look review.

Moon Fabrications chose 420-denier ripstop polyester (solution-dyed, recycled yarn), with a UV 50-plus topcoat and a reflective coating on the bottom. Most consider polyester to be more resistant to UV rays than nylon, and the reflective coating ensures total light blockage and disperses lantern light. 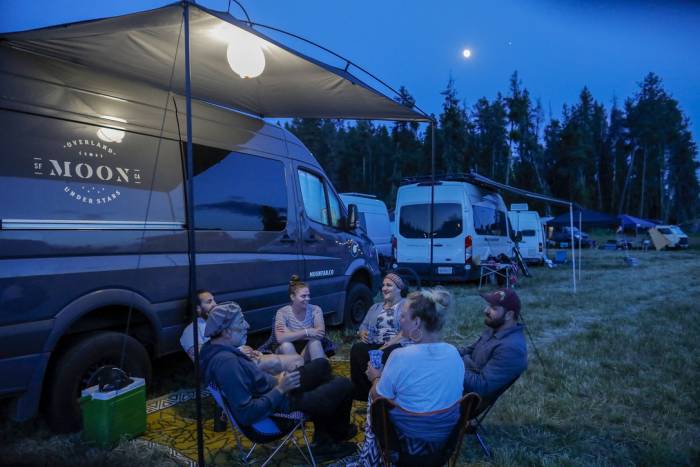 Two 12mm aluminum-alloy (7001) poles and plastic clips support the shade. Each corner has a carabiner to attach one edge to any stationary object. If that object is a tree or similar, a 19mm aluminum-alloy strut pole maintains the structure. Two sectional and adjustable 19mm support poles hold up the opposite edge. You can set up the MoonShade with either the 9- or 7-foot side facing out. 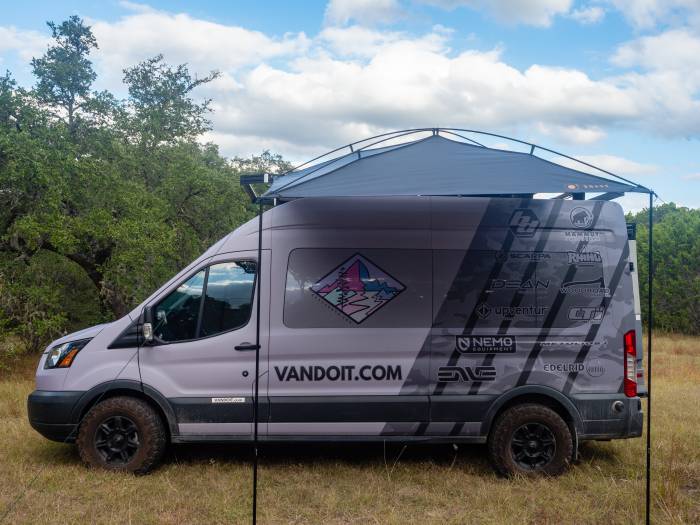 Four 2mm guy lines, four Y-profile aluminum-alloy stakes, and four suction cups (to mount to truck roofs and more) round out the MoonShade setup options. And all of it fits in a 28 x 6-inch, 420-denier ripstop polyester case with a zipper. The entire system weighs a verified 7 pounds 14 ounces.

The MoonShade is available now for $350. Plus, you can get $25 off if you signup for the Moon email list.

I purposely set the MoonShade up on my van for the first time without referencing instructions. I think anyone familiar with modern tents could do the same. The total time was 10 minutes, with most of that dedicated to establishing the correct distance between anchor points on my roof rack to match the distance between carabiners on the shade.

The tension-pole ends fit into PVC-coated corner pockets, and the adjustable-length support poles engaged the usual grommets. Guy lines were girth-hitched into webbing loops on the two front corners. 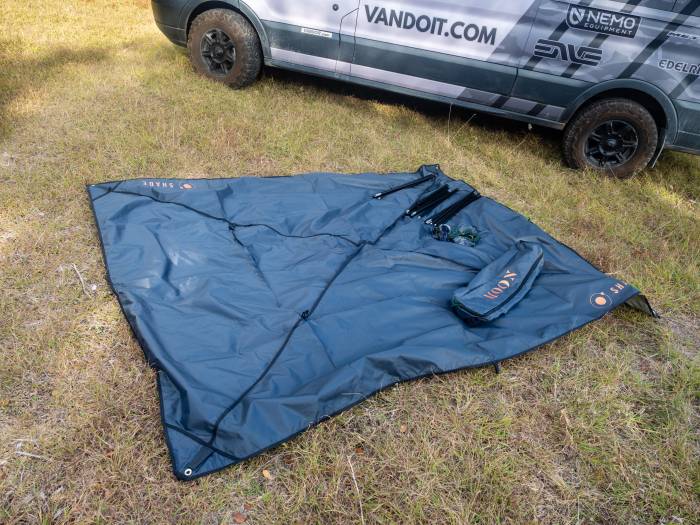 The second setup took less than 5 minutes — about half the initial setup time.

I have a tall van; I had to use a ladder on the first use to establish the ring anchors on the roof rack. The MoonShade has a clever pull cord system to open the carabiner gate, which made attaching to my rack a ladder-less, single-person affair. It was best to keep a pull cord attached to both rear carabiners to save time.

In calm conditions, the MoonShade did exactly as designed: It protected from sun and precipitation. The canopy material and inner reflective coating blocked all light. And the shade did a fair job of spreading lantern light from the included central hook. (There are other various hanging points on the underside as well.)

Much like a tent, the ultimate strength of the MoonShade depended on the guy lines remaining taut and the poles holding shape. I only tested the shade in relatively calm winds, and with two front guy lines, the shade was solid.

More guy lines may be necessary with stronger winds. But I felt the MoonShade would withstand the same winds as the $1,000 electric shade on the other side of my van, which would require support legs and similar guy lines to do so.

The MoonShade is simple and packable, making it a contender for anyone planning an adventure van or overlanding vehicle build. And for me, I would still use it even though I already have a permanently mounted awning.

The sun moves, and, most of the time, I can’t or won’t move the van to chase the shade. At times, I also want more shade than one awning will provide. The ability to use the shade on multiple vehicles is a huge bonus.

The Moon Fabrications MoonShade guards against the sun and precipitation — in the same conditions as permanently mounted awnings without the associated drawbacks. It’s worlds lighter, more compact, and easier to deploy than EZ Ups.

For those planning a vehicle build, it’s a cost-effective option because it’s usable on multiple vehicles. And for those already with a vehicle and awning, it’s an easy, compact way to increase the area of your awning.