Forget about podcasts and maps, the next generation of CarPlay will take over your entire dash with an iPhone-like experience.

As part of its Worldwide Developers Conference, Apple has just announced a massively updated next generation of CarPlay phone mirroring software. More than just a few apps on your SUV’s screen, the new system will let CarPlay take over your ride.

With vehicles having more screens and offering more data, Apple offers more ways to help you customize your drive and better use the internet to help you get just about anywhere.

Even better, Apple showcased it on what might be our first look at the Apple Car. OK, fine, it’s just a very generic dashboard layout, but it’s a layout unlike any other model currently on sale.

So, the layout’s cross-cabin widescreen and lower-stack infotainment unit must be something the tech giant is considering for its long-rumored and very hush-hush possible automotive development.

A predecessor of Apple CarPlay first launched in 2011, but the system as we know it didn’t arrive until 2014. Before that, it used a different name and was little more than an iPod connection.

After that, it allowed you to use some of your iPhone’s best apps right on your vehicle’s infotainment screen. It uses a tiny amount of the car’s own built-in tech to help you use voice recognition to send text messages or use Apple Maps, and it was compatible with a handful of other popular apps. 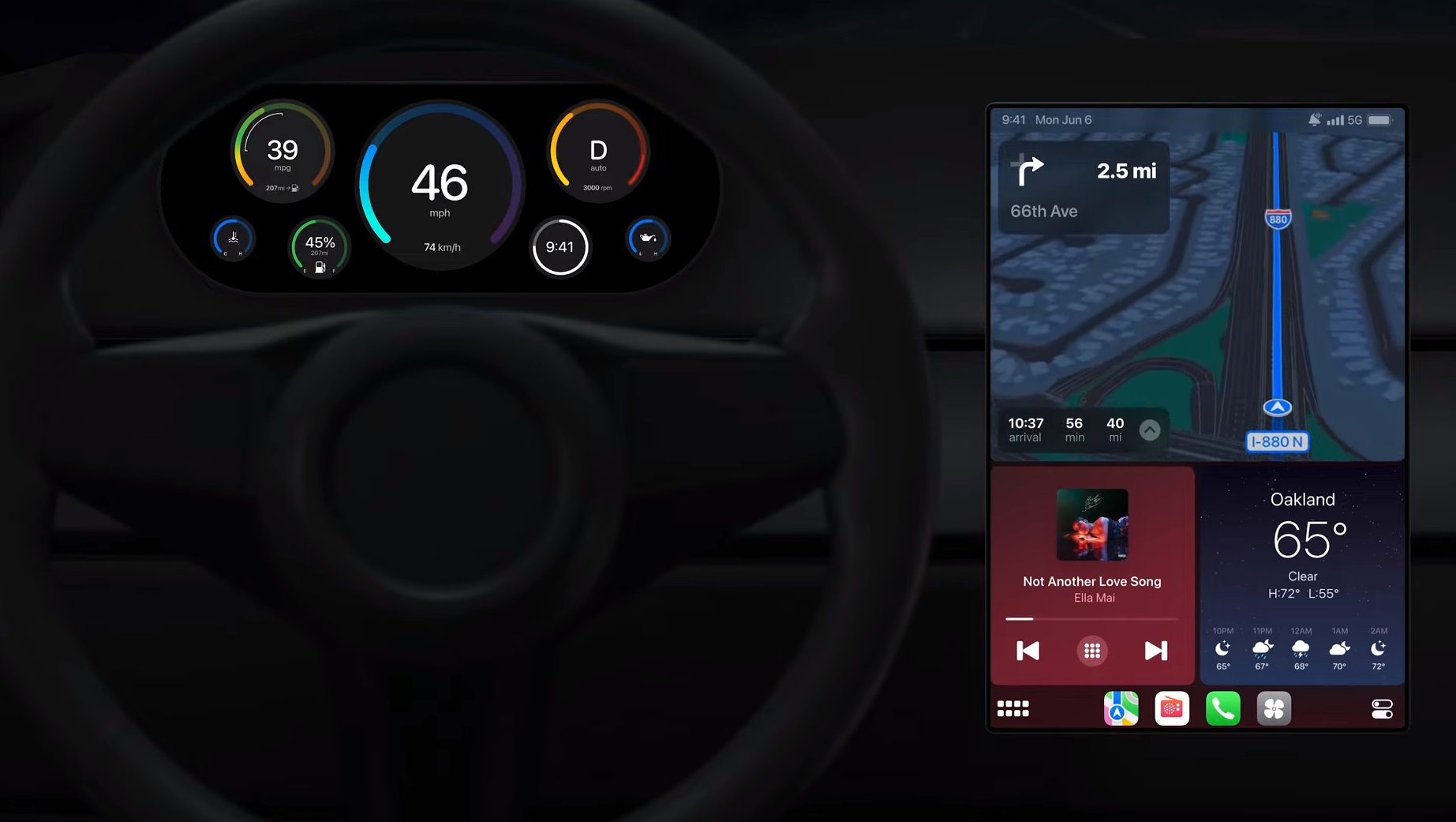 This latest Apple CarPlay update comes with the latest iPhone operating system, iOS 16. Now, CarPlay integrates much more deeply with your vehicle’s own systems and hardware for a more immersive and customizable experience.

Apple showed off the new system with an image of a full digital dashboard created by Apple CarPlay. Even the speedometer, gear indicator, and fuel gauge were all represented in CarPlay, taking the tech far beyond what it is currently able to offer.

The demonstration display is a massive overload of information, though, such as putting a calendar, garage door status, and clocks for Tokyo and NYC with a much higher priority than the song that’s currently playing.

You can fix all of that, though. It’s the point of the system’s extensive new customization options. Put your current trip where you want it, your latest podcast where you want that, and add EV charge sites, off-road campgrounds, or any other widget they can imagine.

New backgrounds for the dashboard will be offered with the update. You’ll be able to pick modern or classic gauges, swap colors, and make loads of other small changes to help customize your vehicle. Or you can pick from included themes. 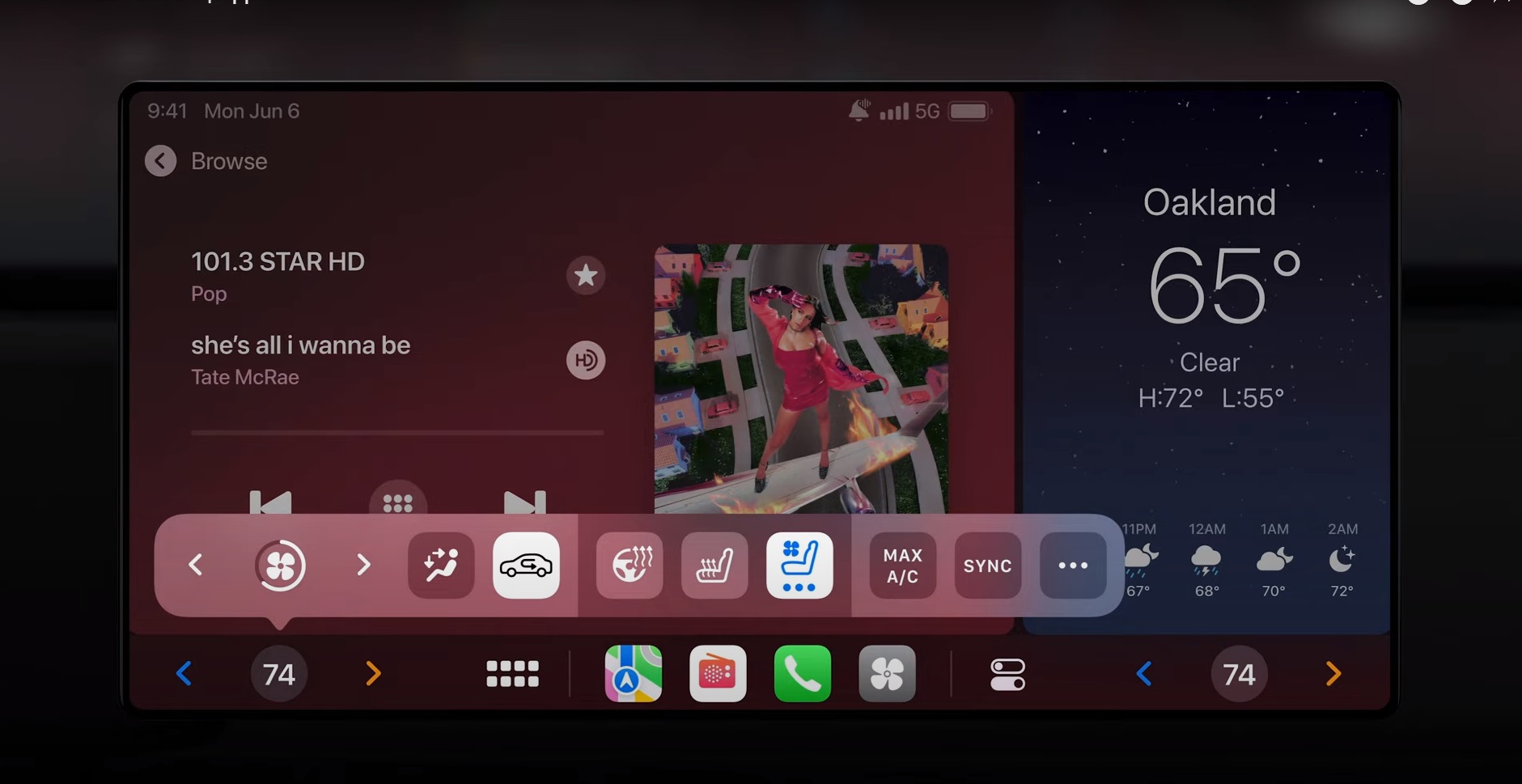 With these updates to CarPlay, the same natural speech commands iPhone users use to control their phone through Siri can also control the car itself. Adjust the radio, change the climate control temperature, and potentially control dozens more crucial vehicle features without looking down or away from the road.

This latest CarPlay update can handle many different sizes and ratios of the in-car screen and can tackle multiple screens. That flexibility has been a problem on older versions of CarPlay, leaving some vehicles unable to access CarPlay on higher-spec models, while offering the must-have feature on base-spec cars.

Apple showed many of the big automakers onboard with this new CarPlay, including Ford, Nissan, Honda, Audi, Mercedes, and Porsche. Unlike prior CarPlay updates, this one won’t work with existing vehicles.

At least that’s how it looks for now; Apple said that the first compatible vehicles will be announced late next year. It’s a long time to wait, but Apple says it has more to tell us about the CarPlay changes between now and then.

Up Next: ‘Betting on a Sunny Day’ Could Win You a Polaris Prize Pack; Here’s How

Saving…
‘Betting on a Sunny Day’ Could Win You a Polaris Prize Pack; Here’s How
Campervan Owner Knows What He’s Selling, and It’s Not the Van Life You Think
×