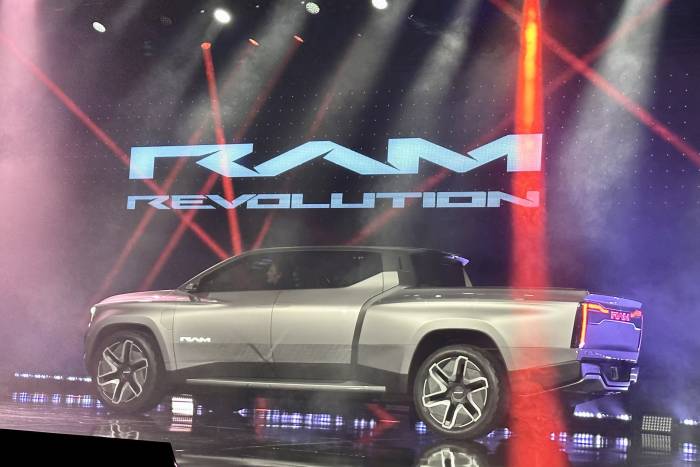 We finally get a good look at what the RAM EV truck might look like and some hints at its high-tech features. The RAM Revolution concept was just unveiled at CES 2023.

With models like the Rivian R1T, Ford F-150 Lightning, and GMC Hummer already on the road, expect to see a full-on explosion of all-electric pickups come to market over the next few years. But RAM is determined not to get lost in the crowd. The truck arm of Stellantis plans to launch an EV version of the familiar RAM 1500 sometime in 2024. And it’s offering a hint of what’s in store at CES 2023.

If the RAM Revolution concept vehicle is any indication, the production model should be a visual standout offering extended range and an array of distinctive features.

The old Fiat Chrysler Automobiles was a reluctant player in the EV market, with former CEO Sergio Marchionne at one point asking potential customers not to buy its first all-electric model, the Fiat 500e. But that’s all changed since FCA’s merger with France’s Groupe PSA. And among the many battery-electric vehicles the automaker now plans to bring out by mid-decade, the RAM 1500 EV is one of the most eagerly anticipated.

The gas and diesel versions consistently comprise one of the best-selling vehicle lines in the U.S. market, and much of that is due to the RAM 1500’s distinctive styling and unique features. So, it’s no surprise that the truck brand will focus on similar attributes to let the EV version stand out in an increasingly crowded segment — with as many as a dozen all-electric pickups expected out by 2025.

RAM has already hinted at some significant features for the 1500 EV, including range that could reach as much as 500 miles. Now, it’s offering even more insight in the form of the RAM Revolution concept vehicle making its debut at CES in Las Vegas.

‘A Roadmap to Our Electrified Future’

“Our new RAM 1500 Revolution BEV Concept … serves as a roadmap to our electrified future,” said Mike Koval Jr., RAM brand CEO. “Yet, RAM Revolution is also our philosophy as we redefine the pickup segment, with a steady drumbeat of announcements and initiatives as we embark on our electrified journey.”

While nowhere near as radical as the Tesla Cybertruck, the RAM Revolution clearly pushes the boundaries of traditional pickup design with a blend of brawn and beauty. It mixes sharp lines and creases with soft curves, from the Revolution concept spending plenty of time in the wind tunnel as slippery aerodynamics are crucial to maximizing range.

The front uses what RAM stylists have dubbed a “tuning fork” design, with split lamps framing a huge “R-A-M” badge. The grille is solid, of course, as there’s no need to feed cooling air into an engine compartment.

Lift the sculpted hood, and you’ll find a massive frunk (or front trunk) that appears to rival the size of the one found on the Ford F-150 Lightning. The frunk is power-operated, as are the charge port, the flush door handles, the rear steps, an active diffuser, and the slightly angled tailgate.

There’s a bit of a sports car to the design, with the RAM Revolution’s all-glass roof sitting notably lower than the current 1500 pickup. That enhances the truck’s aggressive appearance while also lowering drag, a senior project member told GearJunkie. The challenge was to ensure that there was still plenty of headroom.

This is, of course, a work vehicle. The front fascia incorporates a skid plate and towing hooks that can pivot to sit flush and reduce drag.

RAM bills the truck as a “one-space environment.” And that means, among other things, a focus on flexibility. The main seats can be moved, as can twin jump seats.

There’s a movable midgate between the cabin and the cargo bed. Not only can the bed be extended but by using a pass-through to the frunk, objects as long as 18 feet can be carried with the tailgate closed.

The cabin uses an array of sustainable materials. This includes flooring made of recycled rubber and cork and a leather alternative made of “by-products from the apple industry.”

The cabin picks up on the tuning fork theme with twin light bars on the instrument panel. The gauge cluster is digital, and RAM appears to be in the running for “largest touchscreen,” with the display rising out of the center console. There’s also an augmented reality head-up display that can project things like arrows to show a driver where to turn.

The steering wheel is flat on both top and bottom and features capacitive touch controls.

There’s a heavy emphasis on technology, with the RAM Revolution concept adopting a new, centralized electrical architecture. “The Concept creates a connected hub that brings a consumer’s digital lifestyle into the vehicle, using advanced technology to create a customized space for each occupant,” RAM said in a statement.

The truck features an Amazon Alexa-style personal voice assistant. The AI-powered technology can be accessed even outside the vehicle, allowing a driver to close the windows, for example.

An owner can set a variety of “Cabin Modes” that control interior lighting, seating positions, audio, and other functions.

One of the more novel features is called “Shadow Mode,” which will let the Revolution follow a motorist at a safe distance using various sensors. It obviates the need to get into the truck if you want to move it.

In concept form, the RAM Revolution also features Level 3+ autonomy which would permit a driver to go hands-free and do things like read texts or watch videos — though they’d still need to be ready to take control quickly in an emergency.

There’s even a built-in projector that could be used with an external screen to watch movies or videos on the road.

How many of these and other tech features will make it into production is uncertain, however.

Some key details are being held back, starting with the power the Revolution’s electric drivetrain could deliver. Some reports have quoted figures approaching 900 horsepower from two or more motors giving it all-wheel drive.

Range is another question unanswered, though company officials have indicated the production model might reach as high as 500 miles. There’s also been speculation the RAM 1500 EV could add a range-extending generator.

Also left out of the discussion so far is the size of the Revolution’s battery pack. The automaker did confirm it can add as much as 100 additional miles of range in approximately 10 minutes when using a public DC charger capable of 350 kilowatts.

Four-wheel-steering is another feature confirmed on the truck — and likely to carry over to the RAM 1500 EV.

The RAM Revolution is making its debut at CES 2023. The production pickup will debut sometime in 2024, brand boss Koval previously announced. The final design could then debut late this year or early next.

We’ll keep you informed, but you can also stay up to date on the RAM Trucks website. 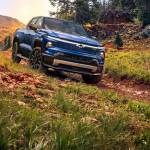 Chevy introduced the electric Silverado at the Consumer Electronics Show today. It’s about to get crowded in the battery-electric pickup market. Read more…