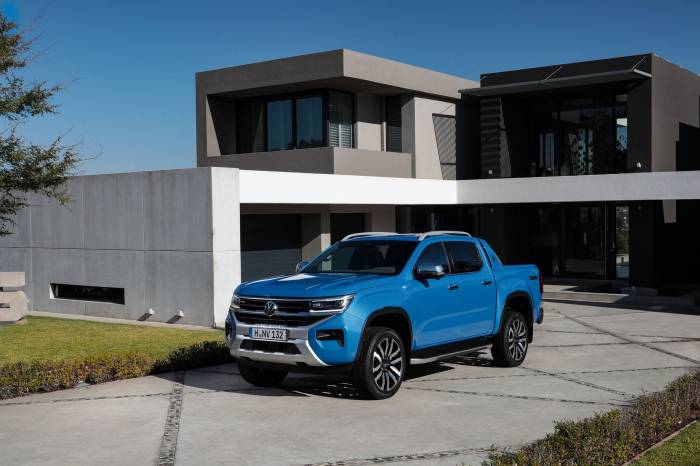 For its second generation, the VW Amarok gets Ford underpinning that grows the midsize truck’s towing, hauling, and cabin size.

Following months of teasing, Volkswagen has finally revealed the next-generation Amarok pickup truck. Volkswagen has partnered with Ford to build a truck that offers more toughness and capability, along with more space and more tech.

What’s left is for Volkswagen to confirm that the midsizer will come to North America, which it officially has yet to do.

Volkswagen sold more than 800,000 copies of the first-generation Amarok truck in markets around the world. But that’s a drop in the pickup truck bucket, with Ford selling more F-Series trucks than that in the U.S. alone.

That might be a big part of why Volkswagen partnered with Ford for this second-generation truck. It shares much underneath with Ford’s new global Ranger, and that’s helped Volkswagen offer a vehicle with more features and capability.

The new Volkswagen Amarok is 210.6 inches long, around 4 inches longer than the model it replaces. The truck is 7 inches longer between the wheels, and that has let Volkswagen grow cabin space — especially in the second row, which it says is much larger than before.

A side benefit is shorter overhangs, giving the truck better approach and departure angles off-road. Of course, breakover angle suffers, which could be its off-road Achilles heel.

Both towing and payload have increased. Amarok will be able to tow a maximum of 7,700 pounds, very competitive for the segment. Its peak payload is 2,557 pounds, higher than the capability of many full-size light-duty pickups, and considerably higher than the current U.S. market midsize pickup king, the Toyota Tacoma — 1,685 pounds max payload.

Volkswagen plans to offer four TDI diesel engines for the world markets. The engines range from a 148-horsepower 2.0L four-cylinder version for Africa to a 3.0L V6 that makes 247 horsepower, which will be offered in some premium markets.

The only gas engine is a 2.3L turbo-four making 298 horsepower. If the truck does (as rumored) arrive in North America, this is the engine we expect, with a 10-speed automatic and all-wheel drive.

Though its bones are shared, the body of this truck is clearly all Volkswagen. The styling is heavy on influences from VW’s SUVs, especially the three-row Atlas. It’s tough-looking but has enough VW friendliness in the shape to remain approachable.

The shape will include LED lights as standard, with IQ.Light matrix LED lamps are standard on the higher PanAmericana, Aventura, and Style trim grades. Amarok tailgate embossing is another very cool part of the look.

Volkswagen says a Euro-pallet will fit between the rear wheel arches in the box. At 1,200 mm wide, that is just 0.8 inches wider than a standard U.S. pallet. So, a U.S. pallet, or, more importantly, a 4×8 sheet of plywood, should be able to lay flat in the box.

Other handy cargo helpers include an electrically operated rolling tonneau cover. It lets you hide and reveal your truck’s cargo from inside the cab or via remote control, handy for loading and unloading. In the truckbed, D-rings can each support up to 1,100 pounds for securing cargo.

Amarok’s roof can hold a static load of 350 kilos (or 772 pounds). Volkswagen mentions that as ideal for globetrotters and says that it will offer a four-person accessory roof tent to install up there. Underbody protection will be on the accessory list, along with a snorkel for improved water fording capability.

More than 20 new driver-assist features will be offered. These include adaptive cruise control, road sign recognition, and six different terrain modes. The cabin will also get Volkswagen’s Digital Cockpit display as an option, with a 10.0-inch infotainment screen standard and 12.0 inches available.

What’s Left? Will We See It Here?

Volkswagen Commercial Vehicles says that the Amarok will be built in South Africa for sale in Africa, the Middle East, Europe, and Australia. To sell a truck built there in America would subject it to hefty 25% import tariffs.

The tariffs don’t rule it out, though; they just make it expensive. They could be avoided if Ford built the Amarok for Volkswagen alongside the Ranger at its Michigan Assembly Plant. Will that happen? We’re not sure. If you’d like it to, make sure to let your Volkswagen dealer know. 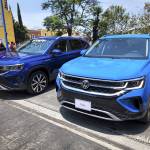 VW Tiguan vs. Taos Review: Test Driving Through the Heart of Mexico