Chevrolet now offers the base 2019 full-size Silverado with a tiny four-cylinder engine. What will surprise you is that the little four is considerably better than the outgoing V6 and very competitive against its V6 counterparts.

The new truck bed is massive, strong, and has great features like a power up/down tailgate and corner-bumper step. With eight distinct models, there should be a version to fit every buyer of this half-ton truck.

But the real highlight to the full-size Silverado sits under the hood. The new base 1500 Silverado powerplant offers better performance and economy than one might expect in a four-banger. Here’s our first look.

The previous standard engine on the 1500 Silverado was the 4.3L V6. The all-new 2.7L turbo four-cylinder now stands as the standard engine on LT and RST trim levels. Somehow, Chevy has been able to make this smaller powerhouse 13 percent more fuel efficient and a full second faster from 0 to 60 mph.

How, you ask? One way is by making it lighter. The new 2.7L turbo weighs 380 pounds less than the outgoing V6-equipped Silverado.

Next, the engine delivers a lot of power. It has an impressive 310 horsepower and 348 pound-feet of torque. Even more impressive is that the new motor reaches its peak torque at only 1,500 rpm.

Combined, this lets the new base Silverado 1500 accelerate from 0 to 60 mph in a respectable 6.8 seconds. It can also tow more than 6,700 pounds and carry 2,280 pounds of cargo depending on vehicle options.

It also delivers an EPA-rated 20/23 miles per gallon and offers much more interior and cargo space.

Designed first and foremost as a truck engine, the new 2.7L turbo underwent a massive amount of testing and validation. Chevy says it has done “475,000 validation tests and 1 million miles of real-world testing to deliver the durability and performance Chevrolet truck customers demand.”

I was able to drive the competition on road against the new four-cylinder-powered Silverado. What I found is that the base Ford F150 offered a plastic interior, thick rubber steering wheel, and tiny infotainment screen. It also had a sloppy brake pedal and a delayed throttle response, along with no power steering or air conditioning when the engine’s start/stop technology shut it down at red lights. 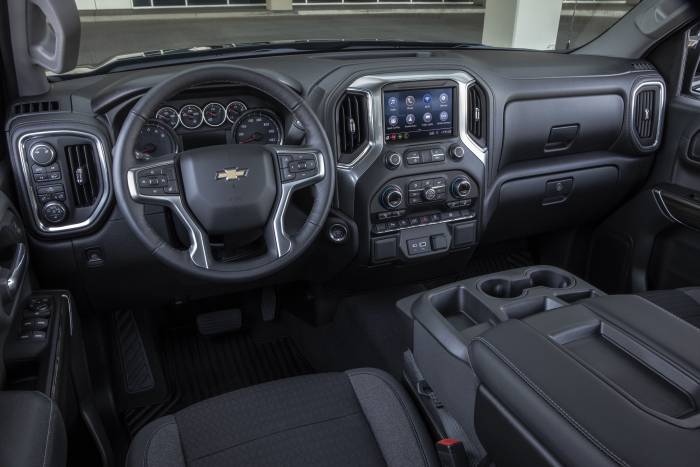 The latest RAM, on the other hand, held up quite favorably in most areas. I found mostly a difference in taste from the Silverado. To be fair, the Ford is due for a remodel. Both the RAM and Silverado are “all-new” trucks for 2019.

For fuel efficiency, the new Silverado 2.7L turbo is slightly better in the city than the Ford 3.3L V6 and is on par with RAM’s new 3.6L eTorque mild hybrid. The Silverado falls short by 2 mpg for highway fuel consumption against its competitors’ V6s.

While fuel economy is good around town and not amazing on the highway, the new 2.7L turbo is considerably quicker to 60 mph, almost one second faster than the competition. It also offers more torque and comparable payload to the competitors.

The suspension hasn’t been retuned for the smaller, lighter engine in the 1500 Silverado, but the hydraulic cab mounts have been tuned differently to reduce road noise and vibrations. In my opinion, the suspension is the weak point in this truck, especially off road. 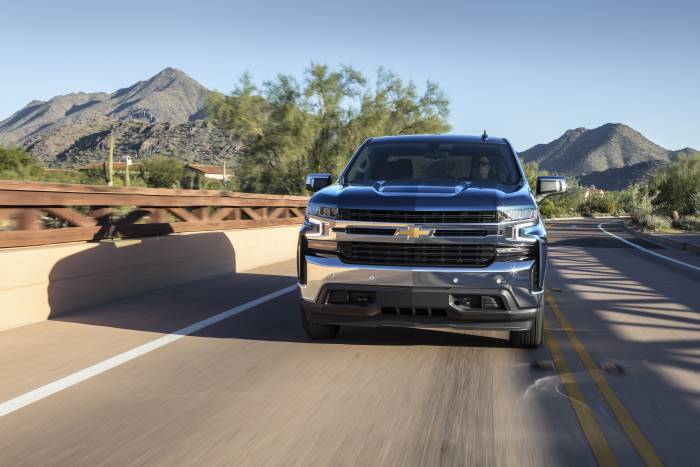 A few things to note about the tiny engine in this really big truck: It doesn’t sound like a V8, which you might expect in such a big American pickup. And the fuel economy greatly suffers when you’re liberal with the throttle.

All in, the eight-speed transmission paired with this 2.7L turbo powerplant is seamless and impressive in all regards. The small engine propels the truck smoothly and with less effort than you’d expect.

If you’re looking to save some dollars at the dealership (and the pump) but still want a very capable full-size pickup, the 2019 Silverado 1500 2.7L turbo might be what you’ve been looking for.

Up Next: Outfit Your Rig: Top Gear From Overland Expo East 2018