Home » Motors » A New Wheeled Vehicle Altitude Record: Getting High in a Unimog

A team of technicians just broke the absolute world record for a wheeled vehicle. They drove a Mercedes Unimog nearly to the top of the world’s highest active volcano. The record now stands at a wheeze-inducing 21,962 feet.

As impressive as the wheeled vehicle altitude record is, it was actually a secondary accomplishment on this expedition. The primary objective of the expedition was to install four emergency radio units at high-altitude camps on Chile’s Ojos del Salado volcano, improving safety for both mountaineers and scientists on the mountain.

The Ojos del Salado volcano is part of the Atacama desert. It’s one of the driest places on Earth and the tallest active volcano on the planet.

Since 1948, the Unimog has been the top dog of off-road capability, especially as a workhorse. On this expedition, the Unimog not only scaled the tallest volcano on Earth but also hauled lots of gear.

And before climbing the mountain, it cruised down the highway to get there. The capability, adaptability, and versatility of the Mercedes Unimog are second to none. 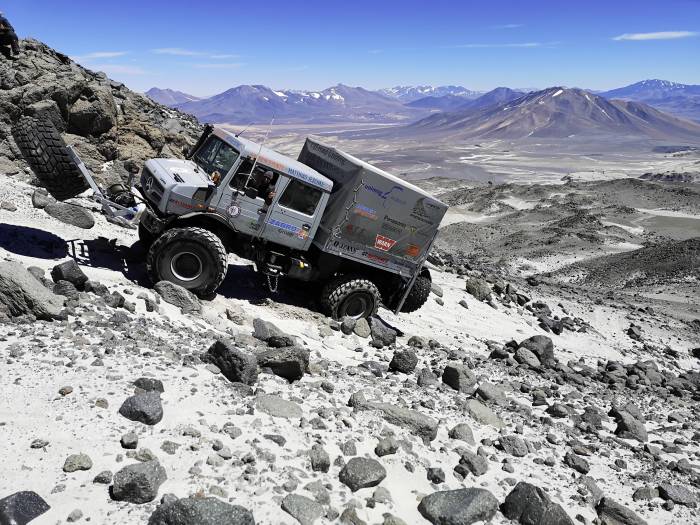 Both the previous truck altitude record and absolute wheeled vehicle driving at altitude record were set on the Ojos del Salado volcano. This latest Unimog expedition broke records on the same mountain.

In 2014, Matthias Jeschke, the owner of Extrem Events, set the world record for trucks at altitude in a Mercedes Zetros at 21,899 feet. A highly modified 1986 Suzuki Samurai set the previous benchmarked for all wheeled vehicles way back in 2007 at 21,942 feet.

Jeschke’s Extrem Events team has now reset both the truck and all wheeled vehicle world altitude driving records. The mighty Unimog established the new record at 21,962 feet. Twenty feet added to the all-out record might not seem like much, but every inch of progress is a serious accomplishment at these heights.

Just for perspective, the summit of Denali is 20,310 feet. And this Mercedes Unimog drove 1,648 feet higher than that.

Up Next: Americans Win Dakar Rally for First Time Ever