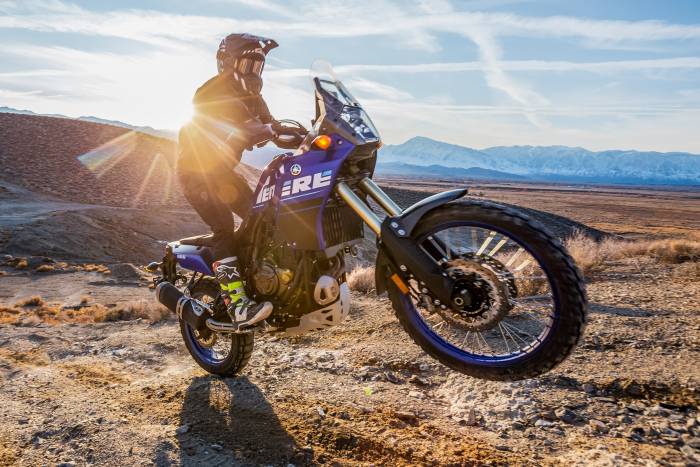 We put some long miles on a base model 2022 Yamaha Ténéré 700 — aka ‘T7’ — and came away impressed with this bare-bones middleweight adventure bike.

Three months and 2,000 miles proved one thing: The T7 might be my favorite adventure motorcycle, ever.

“Just throttle through it!” is the endearing catchphrase of my moto mentor, Josh. It doesn’t matter the situation, from fording a small river, fishtailing a muddy road, or bogging over sand dunes, his advice is the same — and it’s saved me more than a few times.

Growing up on beater dual sports, you have no choice but to master throttle control, clutch, and feel for a bike, especially in any sort of technical terrain. Most modern bikes, however, have an array of sensors that provide automated alternatives, like traction control, ABS, rider modes, and even clutchless shifting. This might sound great at first, but I’m here to tell you, you’re better off without them.

In the last 3 months, I’ve ridden more than 2,000 miles across California and Oregon on the Ténéré 700. I’ve used it to camp in the high desert, explore the alpine in late fall, and traverse singletrack along the coast. Dozens of hours were spent on a mix of surfaces, from the tarmac to dirt, sand, gravel, and loose rock chunder.

Here’s the kicker: The T7 has none of the modern electronics upgrades, and yet, I’ve never had so much fun!

In short: The T7 is an adventure motorcycle for dual-sport riders. It has a smooth-shifting, torquey, six-speed engine, ample suspension, little in the way of modern gadgetry, and an impressive power-to-weight ratio, allowing it to keep up on the tarmac and truly excel on dirt.

The mid-displacement ADV market exploded over the last decade, with many major manufacturers rolling out off-road capable bikes in the 600-900cc range. The T7 was part of this trend, launching in the U.S. in 2019. The Ténéré stands out from the crowd thanks to what it doesn’t have.

Yamaha removed everything deemed unnecessary, saving weight, decluttering the cockpit, and of course, cutting costs, which they passed on to the consumer. Without question, the Ténéré 700 is one of the best-value motorcycles you can buy today.

Designed with a less-is-more ethos, it’s basically the love child of a dual-sport and an ADV bike: simple, reliable, and built to be ridden hard for years to come.

The 8-inch suspension soaks up potholes and rocks. The 21-inch front wheel improves handling on rough roads and allows for knobbier, dirt-oriented tires.

At 452 pounds, the T7 is easier to maneuver at slow speeds, easier to pick up when you inevitably lay it over, and easier to push while on foot.

As mentioned, the bike doesn’t have any complex electronics. Not even cruise control or a color screen. And it’s built with common parts found around the world, making it simple to repair when you do break down.

The seat position and cockpit are designed for standing up. The low center of gravity, long suspension travel, and large front wheel help keep the rubber side down.

Yamaha T7: What I Liked the Most

Going back to the basics brings out the nostalgia of riding as a kid. The Yamaha Ténéré 700 comes with manual transmission only, and no lean angle sensors or rider modes. That all adds up to a bike you have to pilot with riding skill; it’s all about the feel and throttle modulation.

You can fully turn off ABS — one of the very few rider aids on this bike — which I highly recommend on dirt.

The LCD screen can’t be customized, but it does the job just fine. The windscreen can’t be adjusted either, but I found it large enough on long highway stretches. And the modern LED headlights are plenty bright for night rides.

The best part of the bike is the engine. Inside the T7 is a parallel-twin, liquid-cooled, 689cc CP-2 engine with 72 horsepower. It’s the exact same that was in Yamaha’s FZ-07, which is well-regarded for reliability. The engine runs on standard 86 octane and has a 4.2-gallon tank, getting up to 58 mpg.

With a six-speed gearbox, it has linear, smooth shifting all the way through. The T7 can crawl in first as well as pass cars at highway speeds without issue.

Of course, no bike is perfect, and the Ténéré 700 has some obvious downsides. I’ve had issues with some of the small, less consequential parts — a broken handguard, a bent exhaust mounting bracket, and an easy headlight fix.

Depending on your weight and how you ride, the rear swingarm can feel stiff at times and on long highway stretches, I sometimes miss cruise control.

For road riders moving into the adventure realm, the cons are more likely the lack of customization, electronics, and premium features. The display isn’t color, and there is no traction control, no Bluetooth phone connectivity, no integrated GPS, no rider modes, and no lean sensors. If you’re looking for any of these, a Super Ténéré might be a better option for you.

My biggest gripe for Yamaha is the lack of a center stand on the base model, which would be quite helpful for trail repairs. Also, if you’re riding the T7 mostly for commuting, note that the stock version doesn’t have side cases, so you’ll have to add those yourself.

The Yamaha Ténéré 700 is designed for those who want to ride far and hard. It’s designed for getting away from the city and off the tarmac for a healthy portion of the journey.

There are plenty of bikes with more horsepower and Tesla-like cockpits for highway road trips. The T7 is for those who want to learn, or return, to an old-school way of riding — throttle control and feel for the bike without a bunch of electronics in the way. If you like simplicity and prefer to skip layers of menus, setting up rider modes, and trusting electronic sensors, the T7 is for you.

For all the details on the Ténéré 700, and to find your local dealer to throw a leg over one yourself, check out Yamaha’s website. 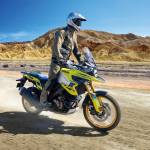 The 2023 Suzuki V-Strom 1050DE might just be the new bike of choice for off-roaders looking for value, reliability, and capability. Read more…