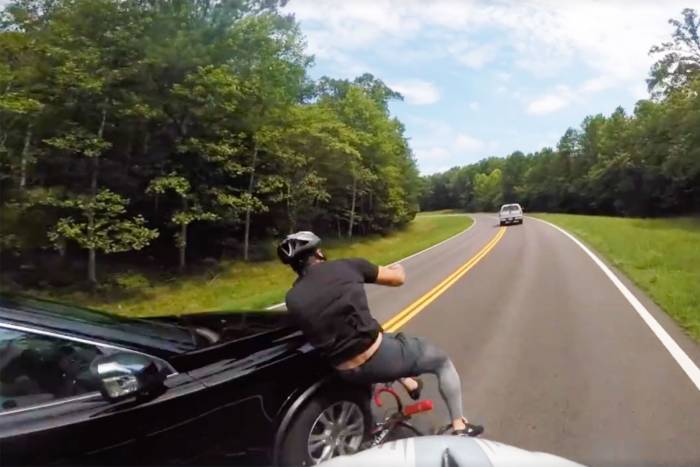 Natchez Trace Parkway is a 444-mile winding, scenic roadway connecting Mississippi to Nashville, Tenn. Because of its history and beauty, the National Park Service permits cyclists to take in the sights and use the full lane.

Greg Goodman and Tyler Noe were cycling along a slight curve on the parkway Saturday, recording the ride from Goodman’s helmet cam, when traffic approached from behind. One white truck cleanly passed from the other lane. The black Volvo that followed did not.

The SUV, allegedly driven by Marshall Grant Neely III of Franklin, Tenn., hit Noe from behind, knocking him from the bike and throwing him to the pavement. Noe popped up after the impact, but the driver sped off without stopping to tend to the injured cyclist.

Goodman’s video footage led authorities to arrest Neely shortly after and charge him with a slew of crimes.

Neely has been working as the dean of students at University School of Nashville, one of the most prestigious private K-12 institutions in the state. Shortly after the incident, he was placed on a leave of absence, according to the school.

The footage below shows the incident in full.

According to police, Neely, 58, faces felony reckless endangerment, leaving the scene of an accident, failure to immediately notify of accident and failure to render aid.

Additionally, Neely’s workplace issued a release about the incident.

Marshall Neely served as dean of students at University School of Nashville before transitioning to a part-time role this summer. He also is the parent of two alumni. As of today, USN has placed Mr. Neely on leave of absence while we investigate the circumstances. All other matters related to his employment are confidential. We appreciate the work of law enforcement on this matter and will cooperate fully with their investigation. Our thoughts are with the cyclist and his family as well as the Neely family during this difficult time.

Noe went to the hospital following the incident and has been released with serious, but non-life-threatening injuries, according to officials.

Up Next: Camping Nightmare: Teen Wakes To Bear Chewing His Head