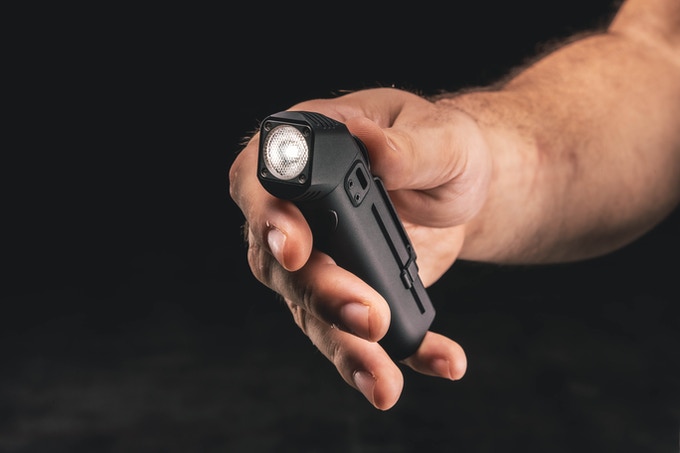 Darkfade is the most unique flashlight launch we’ve seen in a long time. And it turns out people really wanted a motion-sensing flashlight.

Darkfade is an ergonomically designed flashlight that senses its angle in space and adjusts as you rotate your wrist. It launched on Kickstarter with a relatively modest funding goal — “relative” in terms of the over-fulfillment that followed. The light started with a goal of €15,000 ($15,024). Now, with 6 days remaining, it’s raked in over $346,000.

Darkfade calls its light “the flashlight we wanted,” and that’s proven true for more than 2,000 campaign backers so far. What makes it so great? The designer calls the main attraction an “invisible knob.”

Basically, the user turns on the flashlight and then holds down a button. While holding the button, they then rotate their wrist to adjust brightness. Release the button when you’ve got the beam dialed, and you’re good to go.

You can also turn it on at any brightness you want, according to the company. Details on exactly how to do that weren’t available as of this writing.

Darkfade also designed its unit to be comfortable to hold and easy to point whenever you’re not holding it. The 45-degree angle, which it said it came across “almost by accident,” dovetails into your relaxed wrist angle. The angle also helps when clipping the flashlight onto your shirt for hands-free use — no more sticking the end in your mouth, the campaign says.

What about light quality? For that, Darkfade onboarded 200 Samsung LEDs. It says the choice to use so many individual lights makes the beam “smooth.” It also opted against giving the light a concentrated center beam, opting instead for one consistent shape.

The company also promises various software updates and upgrades throughout the flashlight’s life cycle. It calls the first one “sentinel,” and coincidentally, it’s a motion-sensor utility, too. When you place the Darkfade in sentinel mode, it will light up and make noise when anyone moves it — essentially, it can work as an alarm at the campsite, parking lot, or elsewhere.

Finally, a clip attaches via a rail system that Darkfade adapted from the gun industry. It plans to release new attachments on a rolling basis and even promised to “release the 3D files” so users can design their own.

The Darkfade recharges with a USB-C cable and can operate while it’s charging. If you only want one light through the Kickstarter price structure, act fast: just 14 pledges of $129 remained as of this writing. The estimated delivery starts in April 2023. 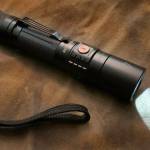 The Best Flashlights of 2022

We tested the best flashlights for 2022 with options for every budget. Top picks include Fenix, Olight, and more! Read more…