On January 4, Ford announced it will produce twice as many F-150 Lightnings as it originally expected in 2022 to meet high demand.

Ford’s Rouge Electric Vehicle Center in Dearborn, Michigan, is about to get a lot busier. The brand announced on Tuesday that its last preproduction electric trucks will roll off the line soon, ahead of a production target that doubles its original estimates.

The factory will produce 150,000 of the all-electric F-150 Lightning pickups in 2022, to meet demand Ford calls “unprecedented.”

Within two weeks of unveiling the electric truck in May 2021, the brand reported over 70,000 reservations. Now, 200,000 reservations have piled up. Maybe more impressively, 75% of those will be first-time Ford owners — a good sign for the brand’s growth as it muscles its way into the EV market.

Ford looks to have answered the production challenge with logistical agility. To streamline manufacturing, it created an internal task force and worked with vendors toward faster delivery.

Its investment into production draws a stark disparity between it and competitors Rivian and Tesla. Both leapfrogged Ford in market valuation despite producing almost no actual electric trucks.

“With nearly 200,000 reservations, our teams are working hard and creatively to break production constraints to get more F-150 Lightning trucks into the hands of our customers,” said Kumar Galhotra, president of the Americas and International Markets Group, Ford Motor Company.

“The reality is clear: People are ready for an all-electric F-150, and Ford is pulling out all the stops to scale our operations and increase production capacity.” 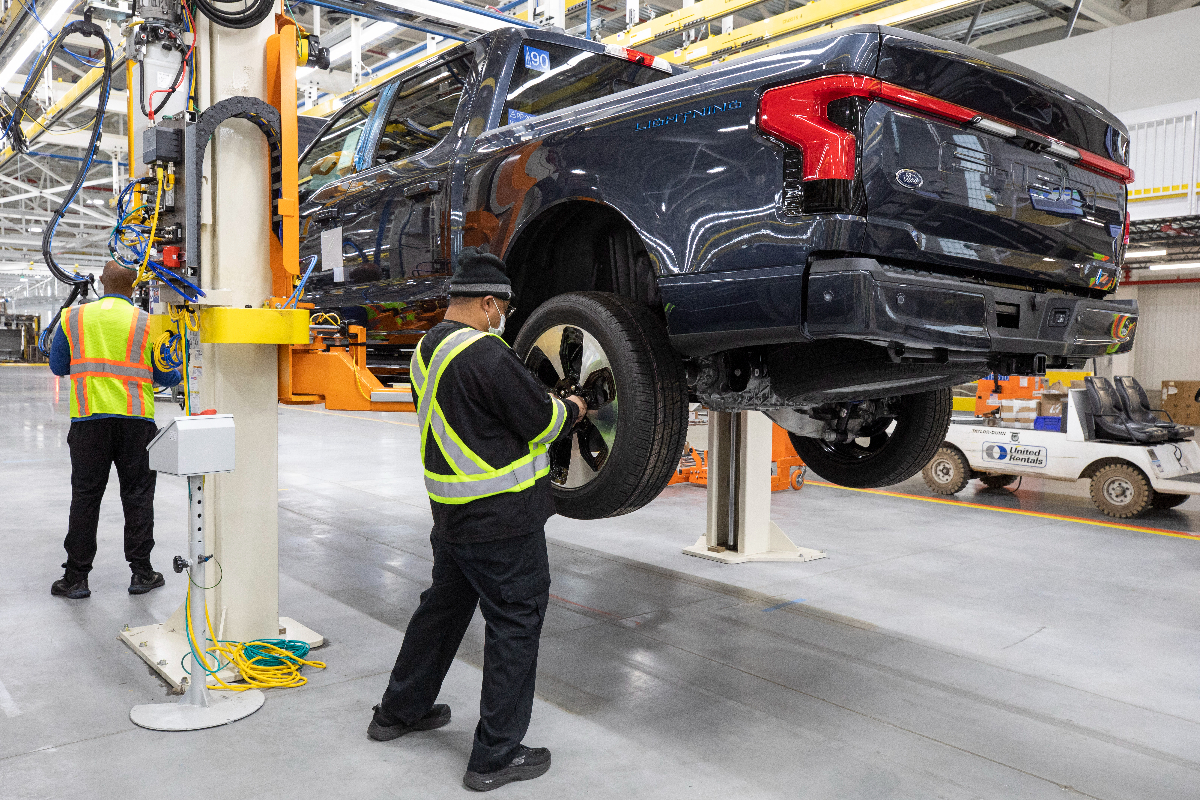 On Thursday, the first wave of F-150 Lightning reservation holders can begin converting their reservations to orders. First deliveries are expected to arrive in spring. Meanwhile, the final preproduction trucks will undergo an estimated 1 million miles of testing in real-world consumer settings.

This year, Ford looks to catapult itself onto the podium of North American electric vehicle manufacturers. After investing $30 billion in the EV field, Ford has set its sights on challenging Tesla as North America’s most prolific EV manufacturer. Within 2 years, it says, 600,000 electric F-series trucks, E-Transit vans, and Mustang Mach-E models will roll off its assembly lines annually.

To achieve those numbers, the brand plans to expand its EV manufacturing operation to Tennessee and Kentucky and open three new lithium-ion battery plants in the states, creating an estimated 11,000 wage jobs.

The first customer Ford F-150 Lightning all-electric trucks will hit the streets this spring, with a starting price of $39,974. Visit Ford’s website to learn more.

Once a staple on U.S. roads, compact pickups have vanished in favor of ever-bigger midsize and full-size models. But Ford is betting big that the compact segment is ready to come roaring back to life, and the 2022 Maverick shows why. Read more…

Up Next: Reaching Into Its Past, Chrysler Looks to the Future With the Airflow Concept

Saving…
Reaching Into Its Past, Chrysler Looks to the Future With the Airflow Concept
Cycling App Zwift to Launch Smart Bike and Trainer
×