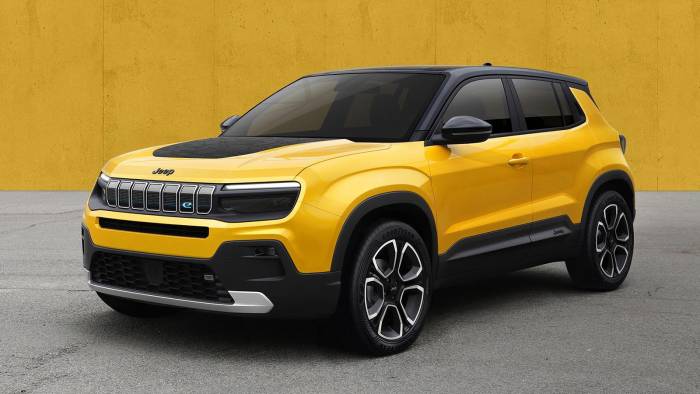 The first all-electric Jeep is set to debut in early 2023, and it will quickly be followed by a procession of additional battery-electric SUVs.

Jeep is set to go electric in a big way. Barely a year after rolling out its first plug-in hybrid, the Wrangler 4xe, it will add a plug-in hybrid version of the new Grand Cherokee later this year, with company officials hinting that a Wagoneer 4xe is also in the works.

But the Stellantis SUV brand is set to take things a big step further, it confirmed Tuesday. During a 2-hour session outlining the Euro-American automaker’s long-term strategic plan, CEO Carlos Tavares, confirmed a fully electric Jeep will roll into showrooms in early 2023.

“It is the first of our comprehensive full-electric Jeep line-up that will cover every SUV segment by 2025,” said Tavares, noting that a second BEV will be added in 2024.

The Portuguese-born executive offered little insight into what the first all-electric Jeep has to offer beyond revealing a teaser image during the “Dare Forward 2030” briefing — with a second image added on the Jeep website later.

The two renderings appear to show an SUV sized somewhere between the current Jeep Compass and Cherokee models. It features many familiar Jeep design cues, including the iconic seven-slot grille. But, with no engine under the hood, the grille is sealed off and carries a bright blue “e,” signaling it’s electric.

Overall, a close inspection suggests a number of tweaks have been made to improve aerodynamics and, in the process, to enhance range. Unlike the Wrangler and Grand Wagoneer 4xe models, the all-electric Jeep will ride on a new, skateboard-style architecture, rather than share platforms with an existing SUV.

That will permit engineers to move the battery pack and motors underneath the load floor. In turn, that approach will yield a lower center of gravity and free up space normally devoted to the engine compartment for additional cargo and a potentially bigger passenger compartment.

It’s unclear how large the battery pack will be and how many motors might be used, but it’s all but certain there will be a version with at least one motor on each axle to provide the electric version of all-wheel drive.

Asked about the sort of experience Jeep will want to provide, brand CEO Jim Morrison said the focus will be the same as with the 4xe models.

“We’re pushing real hard to build on what’s natural for Jeep, and our electrification adds to our four-wheel-drive capability,” Morrison said during an exclusive interview during last month’s Chicago Auto Show.

“We say ‘Jeep is freedom electrified,’ and it’s making the vision about being true to our brand and delivering on freedom in a way that underwrites capability improvements.”

That said, where the 4xe models offer only a limited range in all-electric mode, it’s widely expected that the new BEV will deliver a minimum of 200 miles per charge, and possibly more than 250, in keeping with broader trends in the market.

During his Tuesday presentation, Stellantis CEO Tavares said the company plans to go 100% all-electric in Europe by 2030, with fully 50% of its sales in the U.S. also made up of BEVs. The company is developing four different all-electric architectures to cover its broad vehicle lineup.

That will cover all 14 Stellantis brands, including Chrysler, which in 2024 will launch a version of the all-electric Airflow concept shown at this year’s Consumer Electronics Show.

Ram, meanwhile, announced it is bringing out a BEV version of its 1500 pickup in 2024, as well. And Tavares said that the pickup and van division will rapidly increase the range of its own all-electric models, with a BEV version of every product line by 2030.

So far, Ram has only shown off a rough rendering of the 1500 electric pickup. In Chicago, brand boss Mike Kovals told GearJunkie that a working prototype will be revealed later this year. And on Tuesday, Tavares said the automaker will begin taking advance orders well ahead of the EV pickup’s launch.

Ram also is scheduled to get a hydrogen fuel-cell version of its heavy-duty truck. That will allow motorists to drive longer distances than a battery model while being able to refuel in about 3 minutes.