The three bears, each found in a different area, were euthanized for their partial blindness, disorientation, and neurological issues. Last week, Montana officials said an examination had found the cause of the bears’ sickness: avian influenza.

“We suspect these mammals probably get the virus from consuming infected birds,” Wildlife Veterinarian Jennifer Ramsey said in a news release from Montana’s wildlife department.

It’s the first documented case of highly pathogenic avian influenza (HPAI) in grizzly bears, officials said. Yet it’s also just the latest evidence that the avian flu has spread to mammals. A fox and a skunk in Montana also tested positive for HPAI last year. In other states and countries, the virus has shown up in raccoons, black bears, and even a coyote, wildlife officials said.

The latest outbreak of the avian flu is known as H5N1, and it’s now considered the largest foreign animal disease outbreak in U.S. history, according to the U.S. Department of Agriculture (USDA). Nearly 58 million birds have contracted H5N1 in commercial and backyard flocks across 47 states. That’s caused spikes in poultry prices, along with egg shortages, in supermarkets across the U.S. It’s even led to an increase in egg smuggling across the U.S.-Mexico border.

Thus far, most of the infected birds identified by scientists have been wild and have been spreading the disease to animals that eat them.

Officials from the USDA have recorded avian flu infections in 110 mammals since May 2022, according to the government website. That includes raccoons, foxes, and skunks.

“We have not had this virus in our part of the world on this scale before,” Richard Webby, a director in the Department of Infectious Diseases at St. Jude Children’s Research Hospital, told The New York Times. “In the world of flu, this is a pretty major event.”

It’s difficult to track and contain a virus spread by wild birds that often migrate across hundreds of miles and remain asymptomatic when infected, wildlife experts said. If it continues to spread throughout spring and summer, when temperatures rise and many animals emerge from hibernation, the bird flu could become more widespread, The New York Times reported.

The Centers for Disease Control and Prevention (CDC) considers the risk of HPAI spread to humans to be very low. However, Montana residents should take precautions when handling game birds, sick or dead birds, and mammals they find, officials said. That means avoiding contact with sick or dead wildlife. If you must handle a dead animal for disposal, you should wear gloves — even if it’s unlikely the animal died from a contagious disease. 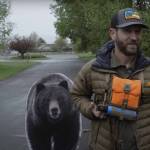 In one of MeatEater's latest films, expert bear hunter Clay Newcomb digs into the efficacy of defending himself against grizzly bears.  Read more…