Mountaineering may soon have a new home under the towering north face of Mount Everest. If all goes as planned, the International Mountaineering Center will open in 2019 in Tibet. 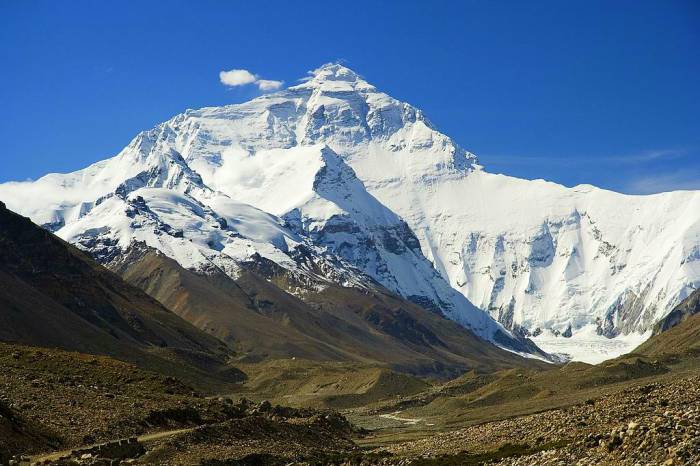 China will build a $14.7 million facility in Tibet’s Gangkar township, which sits at roughly 14,000 feet. It’s intended to house a travel agency, a helicopter rescue base, and medical services, among other features.

News of the proposed 900,000-sq.-ft. facility was initially reported by China’s state-run newspaper, the China Daily. Though there are few details on the project’s layout or design, we assume it will spread out campus-style with multiple small buildings.

The township is miles from Everest’s north face base camp. But it will serve as a gateway for mountaineers, skiers, paragliders, and tour guides, according to the report.

Nyima Tsering, deputy director for the bureau, told China Daily the center will have a “mountaineering museum; rental and repair centers for cars, motorbikes and bicycles; and restaurants and accommodation[s].”

Construction begins next year along the north slope, the less popular of Everest’s ascent options.

With an official presence along the northern route, China and Tibet hope to increase tourism and set a higher standard of climbing and stewardship than Nepal’s south side, which has infamously experienced overcrowding, growing litter piles, and climber-Sherpa hostilities.

Historically, the mountain’s south side in Nepal has proven favorable for tourists and mountaineers. There are a number of geo-political factors at play, but, until recently, Nepal was more stable than the Tibet-China border side of the mountain.

A team of Sherpas works to save lives high on Mount Everest. This first-of-its-kind rescue operation is the subject of new reality TV show, Everest Air. Read more…

But in recent years, tensions between Nepali Sherpas and tourists, increasingly dangerous conditions (particularly in the treacherous Khumbu Icefall), and enormous crowds have made the north side route more appealing.

Having a dedicated high-altitude rescue station and improved accommodations for tourists, trekkers, and climbers could lure more dollars to the Tibetan plateau.

Since 1953, nearly two-thirds of Everest ascents favored the south route in Nepal. The Chinese project for 2019 could bring more balance to the number of attempts and summits on the world’s tallest peak.

Up Next: The Dawn Wall Goes Free…Again!