The climber who just set the new FKT for The Diamond doesn’t care about climbing fast. But a record is a record.

Talk to Maury Birdwell, the fastest gun on The Diamond, and he’ll tell you speed climbing is dumb. He might be right, but he’s also fast.

On Monday, August 30, Birdwell broke Wade Morris and Stefan Graebel’s record for the fastest car-to-car circuit of the Casual Route (5.10a, IV) on Longs Peak. The objective demands 10 miles of trail running, 1,000 feet of free soloing, and 5,000 feet of total elevation change (including the climbing).

When Birdwell barreled into the trailhead and stopped the clock, it read 3 hours, 26 minutes, 12 seconds.

Climbing the Casual Route and everything else it entails takes most people at least a half-day, if not over 24 hours. From that perspective, Birdwell’s time astounds.

Morris and Graebel broke the previous record last summer by a margin of 6 minutes. The old record, 3 hours and 59 minutes, had been set by the legendary Dean Potter in 1999. Birdwell smoked both by nearly a half-hour.

Many would consider his time trial to be superlative. But when I talked to him about it, the numbers on the stopwatch were the last thing on his mind. Instead, he pointed to an internal drive that keeps him going, and the Front Range community that continues to inspire him.

“When you do something like this, leading up to it, you don’t know what’s going to be in your head — other than the angsty Jimmy Eat World in your headphones or whatever,” Birdwell joked.

“And I’ve got a military background, so I do have a chip on my shoulder and I wondered: would I just be raging the whole time? But it wasn’t that at all. Instead, it was this deep appreciation and gratitude for all the people in my life who continue to show up for each other.”

Inspiration From Within and Nearby

Birdwell says his Casual Route project, like so much of what surrounds us, was a product of the pandemic. Shut down for a year and facing difficult times, he started thinking about what he could do around his home in Boulder, Colorado.

He hadn’t climbed the Casual Route for quite a while. In fact, he’d barely ever climbed it.

“I’d only climbed the route once, forever ago. But I’d always wanted to solo The Diamond,” he explains. “Then, during COVID, I was focusing local. 2020 was super shitty for all of us, on a global scale. And personally, I had some stuff go down that was not great. For me, in those periods, I latch onto a thing. Then, I can enjoy the process of ‘I just wanna do a thing and I wanna do it really, really well.’”

Surrounded by adventurous friends and a community that’s known to blur the boundaries between running and climbing, Birdwell started to synthesize the idea. On his first time back on the route since the days of yore, he and Morris took a speed lap. They finished the round trip in a decidedly brisk 4 hours, 57 minutes.

From there, making the leap to soloing seemed logical.

“[P]art of it has to do with simplicity, and being honest with myself: If I’m simul-climbing it fast, and if I’m going to be running it out 100 feet above a piece, I’d just rather not have a rope on and not delude myself in the idea that I’m being safe. Wade and Stefan made it as safe as they could, for sure. But it really didn’t feel that much riskier for me to solo.”

At the end of last summer, Birdwell gave it his first shot. He was on pace to beat Wade and Stefan’s record, but icy conditions delayed him on the descent — then, half a mile from the car, he tripped and rolled his ankle. The attempt, and the season’s training, was a wash. But the fire had been lit.

Friends and Allies: Casual Route FKT Training and a Near-Disaster

Maury Birdwell is well-accustomed to climbing exposure. As a co-founder of The Honnold Foundation (which he assesses to be his life’s work), he’s spent a fair amount of time scampering around mountains with the world’s most prolific free soloist.

“[Honnold’s] words were ‘get some,'” Birdwell said, though it’s unclear whether that spoke about his onboarding process with the nonprofit, or his position as one of Honnold’s climbing partners.

Through that relationship and others, Birdwell blocked out his schedule in July and August to train for the Casual Route FKT. His methodology would be simple: move fast in mountains. Repeat.

This spring, he and Honnold climbed Epinephrine (5.9, 2,000 feet), outside Las Vegas, as part of a bigger linkup involving a fair amount of ridge running and another route. Allegedly, Honnold was gassed at the end of the day, claiming he was done with big linkups. (We’ll see how long that lasts.)

“I went to ‘Wyatt Training Camp’ in Leavenworth for two and a half weeks,” he said. “We did 12- to 20-mile days in the mountains, just moving light and fast. I came home and rested for a week! — my body was so crushed.”

However, he felt physically ready for the task. Then in mid-July, with only 6 weeks left in the typical Diamond climbing season, he ripped a cam out of Directagonal (Birdwell’s grade “5.11+++”) and caught a finger on his nut tool on the way down.

The resulting gouge required 17 stitches and could have sidelined the FKT attempt. By the time he could climb at all again, he only had 3 weeks of reliable weather left, and the Longs Peak summit can ice over dangerously early in the season.

Birdwell spent a couple of weeks resharpening his climbing to establish the margin he wanted for the free solo. By the time he was ready, his window for the attempt had suddenly narrowed to one day: Monday, August 30.

‘Part of the Appeal is That You Feel Like a Superhero’

At 8:15 a.m., Birdwell checked in to the Longs Peak trailhead carrying nothing beyond the bare necessities: rock shoes, chalk bag, a half-liter water bottle, some Skratch powder, and his watch (preloaded with Jimmy Eat World). Without ceremony, he started the clock and took off.

An hour and 21 minutes later, he stood at the base of the North Chimney, the access point for the climbing on The Diamond proper. Taking the proverbial deep breath, he took a moment to compose himself before he started up.

He climbed the chimney “a minute or two” slower than he planned, paying attention to his breathing.

“Part of the appeal is that you feel like a superhero for three and a half hours,” he said. “And you’re not at all — you’re totally vulnerable. But the day was unbelievably perfect. I couldn’t believe how gorgeous it was up there. Everybody I passed [on the route] was in the perfect spot for me to pass. And the only thing we talked about was how great the climbing up there is.”

“It was kinda funny, I got there and, like, reached between this guy’s legs to tag the summit monument as he was getting his picture taken. Then as I was walking away, I tripped because my legs were jello. They were like, ‘Who’s this a**hole?'”

When he checked his watch at the summit, he didn’t believe the time it showed — 2 hours, 34 minutes. He worried that he’d bumped it somewhere and temporarily stopped it. Good thing he’d started the timer on his phone and stashed it under the ranger station at the trailhead as a backup.

Processing this unwelcome bit of information, he still chose not to pin it on the descent — this time, he would refuse to blow his effort with a bad fall. But habits are habits.

“I almost Supermanned like a half-mile from the car. You know that feeling where you’re sprinting as fast as you can with your face way out in front of your feet, trying not to fall? And it was the same place I rolled my ankle last year!”

It was the only close call on an otherwise smooth downhill run. And when he pulled into the ranger station, neither the watch nor the phone lied. 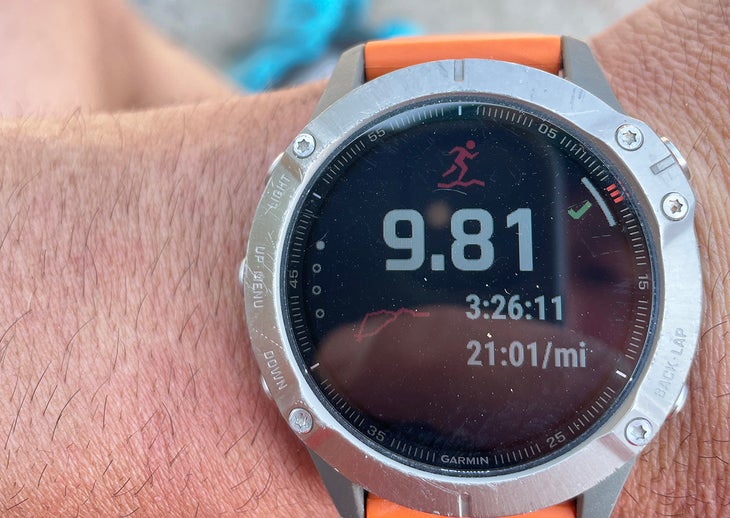 Birdwell said the rangers on duty didn’t believe him, which he laughed about but didn’t care about. There’s a deeper meaning in the sport that he’s more interested in accessing.

“There’s a deep value in the process [of climbing] that far outweighs the thing itself. Speed climbing is dumb, and I’m tired of losing friends to the extreme end of climbing,” he said, noting his relationship with Honnold and his climbing career that’s spanned 2 decades.

“But while they’re alive, they’re really alive. The biggest part for me is the communal part — the climbing tribe. It’s a family.”

Maury Birdwell is a board member of The Honnold Foundation. He’s also general manager of Jeremy Collins’ art and apparel company, Meridian Line.

They bike, run, and climb — then retrace their steps. If you haven't seen endurance athletes Krupicka and Griebel set the fastest known time (FKT) for Longs Peak Triathlon, it's worth watching. Read more…

Up Next: EV RV: Zeus Electric, SylvanSport Team Up to Build All-Electric Motorhome